Illinois 42, Southern Illinois 34: An Ugly Win Is Still A Win

The Fighting Illini are 1-0, making them a better team than Kansas State.

Share All sharing options for: Illinois 42, Southern Illinois 34: An Ugly Win Is Still A Win

That sucked. I know we should be happy because our beloved Illinois Fighting Illini walked away with a win to open the 2013 season. But I'm not happy. Because they only managed to beat the Southern Illinois Salukis, an FCS program, by eight points, despite having two separate 18 point leads. Tim Beckman's third win at Illinois was easily his ugliest.

The Illini actually trailed SIU going into the second quarter, as the offensive line started the game terribly and the defense seemed determined to out-terrible them. One of the two units made adjustments. The other unit was the defense. 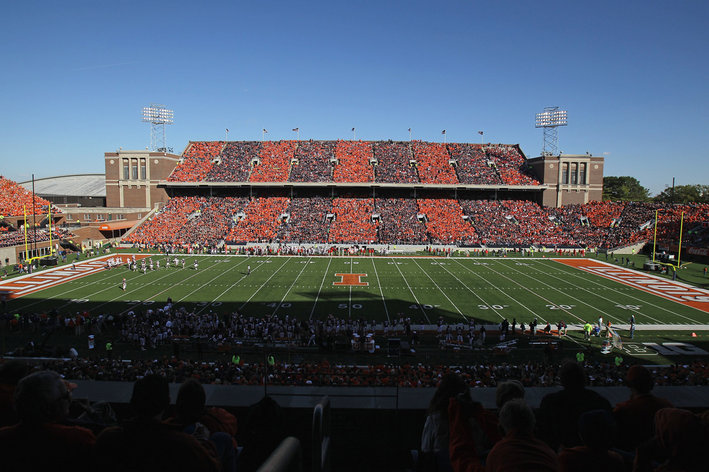 I'm probably being too harsh on the defense, seeing as they did only allow 266 total yards. Horrible field positioning brought on by turnovers (a Nathan Scheelhaase interception and a Reilly O'Toole fumble) and two horrible punts by Justin DuVernois more or less put Tim Banks' boys behind the eight-ball. But still. If they play anywhere near that sloppy against Cincinnati next week, the Bearcats will run roughshod over the Illini.

Not everything sucked though. Scheelhaase threw for 416 yards and two touchdowns while averaging 11.6 yards per attempt. Yes, it was against an FCS team, but it shows promise and a certain level of comfort with the new Bill Cubit offense. RB Josh Ferguson had himself a nice game as well, racking up 153 total yards, most of which came on a beautiful 53 yard screen pass touch down. The offense actually had three plays for more than fifty yards. Ten different receivers caught a pass. We're going to be a much different team than most of us are used to and it's going to be exciting.

V'Angelo Bentley returned a kickoff 100 yards for a touchdown, which is the first time any Illini player had taken a kick to the house since 2008. Maybe special teams will actually be good for once? Freshman wunderkind/panacea Aaron Bailey made his Illini debut, rushing twice. His first rush was good for a first down. His second? A touchdown. Obviously he just needs to be fed the ball more often as all he seems capable of doing is making great things happen.

It was a very ugly win (featuring yet another Illini coach drawing a sideline interference penalty), but my anger is subsiding as time goes by. There were more than a few positives to go with the overwhelming negatives, but at least we didn't pull a Kansas State and lose to our D-2 opponent. But if the marketing department ever tries celebrating an eight point win over this inferior of an opponent ever again, I will be very disappointed. 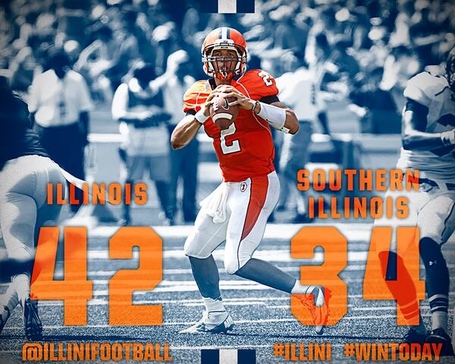 It's funny against Northwestern. Against SIU? It's just sad.