This is Illinois football. It’s a sad song, but we’re going to sing it anyway.

Share All sharing options for: This is Illinois football. It’s a sad song, but we’re going to sing it anyway.

Bret Bielema is a football coach, and he has a gift to give. He can make you see how it could be, in spite of the way that is.

Can you see it? Can you hear it?

It felt like a train coming down the tracks. You could only hear the engine’s whistle in the distance, and it slowly, methodically came toward you. At a certain point, you could even feel it, as the ground rumbled below your feet.

On the road to hell, there was a railroad line.

Despite putrid redzone performances and referee malfeasance and a loss in Bloomington Week 1 against what turned out to be the worst team in the Big Ten without a direction in their name, Illinois and Bielema rallied to reel off six wins in a row.

Illinois football controlled its own destiny to its first appearance in the Big Ten Championship game in Indianapolis. Was this real life? What year was it?

The only thing that stood in the way of the program’s first trip to Lucas Oil was two home games against struggling Michigan State and middling Purdue. It seemed like a foregone conclusion.

I had written as much.

As it turns out, nowhere may be exactly where they’re going on Dec. 3.

It could still become a reality, but the likelihood is grim. The outlook is even worse: over 100,000 rabid fans at the Big House with Blake Corum and the Wolverines licking their chops to get a piece of the frazzled Illini await in less than a week.

The athletic department put all of its eggs in two baskets, so to speak. AD Josh Whitman and Bielema told anyone that would listen that we need to sell out Memorial Stadium against Michigan State and Purdue to give the team an advantage that it needed. 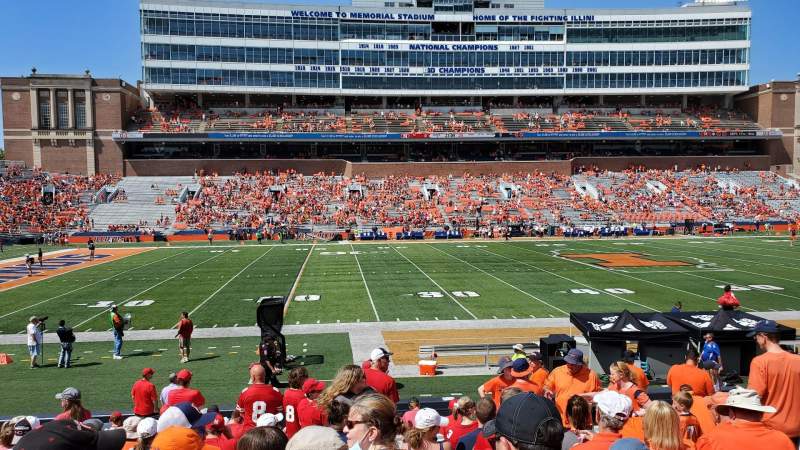 On the left, the fans showed up and the team didn’t show out. On the right, they didn’t bother with either. It’s a slippery slope.

The points averse offense mustered only 39 points in two home games against defenses that allow more 25 points per contest.

As it turns out, defense may not win championships.

The Illini defense has been elite all season. You hear coaches say all the time that defense wins championships. That’s typically coach speak.

We know it’s not an altruistic standard, at the least.

DC Ryan Walters has been exquisite in year two building a championship-level defense with largely unknown players and tissue-paper-thin depth.

The Illini were called for 12 penalties for over 120 yards, many of which came in the secondary. While some flags were legitimate, many left fans scratching their heads and Illini coaches taking off their headsets to state their case.

OC Barry Lunney still needs to wash his hands from the ink spot he got on his right palm from signing his new contract earlier this week. More years, more money.

The redzone efficiency improved drastically, and the scripted first drive resulted in an easy first score for his offensive unit. Off to a good start, but we started to sing that same old song.

Short passes. Inside runs. No chances. Too conservative.

Isaiah Williams didn’t factor into the outcome. This could be personal bias, but I don’t recall seeing any crossing routes to the shifty wideout that leads Power 5 wide receivers in missed tackles forced.

No Josh McCray. That’s been a mystery all season.

At the end of the game with the outcome all but decided, former Heisman hopeful and Illinois RB Chase Brown suffered a lower body injury and was forced to leave the game. It’s not ideal, but does not appear to be career-threatening.

Brown’s streak of consecutive 100-yard games was broken with a total of 98. An extremely questionable holding call downfield kept the tailback from extending his program record.

Brown recorded two touchdowns on the day, and struck a Heisman pose to celebrate after one of them.

It was a weird thing to do, but I can’t believe that I actually witnessed an Illinois player do that in Week 12 of a college football season and didn’t think twice.

That speaks to how far the program has come under Bielema in less than two seasons.

Take my extremely scientific, unbiased poll that gets your input on the state of the Illini offense.

Do you think the Illini offensive game plan is:

Bielema is bullish on the two remaining road tilts for your Fighting Illini to get to Indianapolis.

“We have two remaining opportunities, both being on the road and sometimes in situations like this, that is exactly what you need. Get on the road and double down on 74 guys and staff going over to Ann Arbor to see where we’re at,” Bielema said.

You see, Bret Bielema is a football coach, and he has a gift to give. He can make you see how it could be, in spite of the way that is.

Can you see it? Can you hear it?

Illinois by 40 in Ann Arbor on Saturday.

On the road to hell there was a railway line.