When I was a student at Illinois (B.S. 2013, MAS 2014) I worked the midnight security shift at the Bromley Hall front desk for five years. My responsibilities included corralling drunk kids from the check-in tables at the entrance to the elevators without incident, preventing unaccompanied non-residents and other undesirables from entering the building, and watching lightweight freshmen who get hammered after two beers make fools of themselves for my personal amusement. My shift lasted from midnight until eight in the morning but once the clock struck 3:00am things really died down because everyone would already be back from parties, bar closing, and getting drunk food, so there really wouldn’t be much activity in the lobby after that.

If you’re unfamiliar with the setup of Bromley‘s lobby, the layout more or less resembles that of a hotel’s. There’s a big semi-circular desk at the front when you walk in that overlooks the entrance and a big lounge area to the left (From the vantage point of sitting at the desk). To the right is a swimming pool area you can look into through a set of tall glass windows. The pool was locked and closed from midnight until 6:00am to prevent drunk dipshits from sneaking in and drowning, and since no one I knew in college woke up at six in the morning for anything except Unofficial I almost never saw anyone in it during a security shift. The key word there being "almost".

Around the halfway point of my shift, I would sometimes take a break from my strenuous job of sitting at a desk and ignoring noise complaints to lounge on my throne in the end stall of the building’s public restroom and leisurely read the erudite writings of The Black Sheep. I returned to the lobby after one such break and, to my horror, was greeted by the sight of some old guy swimming laps in the pool. The guy clearly saw the startled look on my face and yelled "I have a key! It’s OK!" through the glass as he smiled and waved.

As I talked myself off the mental ledge of thinking that I let Geriatric Ted Bundy slip into the building undetected, the man finished up his laps, got changed in the locker room, and strolled into the lobby to shake hands and introduce himself: "Sorry to scare you! I’m Lou Henson."

Holy shit! Normally the people I met in the lobby at that hour were cops, chain-smoking insomniacs, and fraternity pledges returning home from a particularly rough round of hazing. Legendary Final Four coaches do not fall into any of those groupings. I was stuck by how casually and cheerily Lou introduced himself to me before I could even get a word in. And he really couldn’t have been a nicer guy. Lou explained how Bromley gives him a key to the building with pool access because of the relationship Bromley has with him providing lodging for kids attending his summer basketball camps. I asked him questions about the Flyin’ Illini, the Final Four run in 1989, and his thoughts on the program as it stood at that time. He was eager and excited to answer all my questions at great lengths (Since I’m sure some of you are curious: He loved Bruce Weber and was hopeful he could put the team back on the right track. This was a few months before Bruce was eventually fired).

He also expressed a genuine interest in my life, inquiring about my studies and career aspirations, my involvement in sports (All I could come up with was that I played intramurals and golf), and asking where I went to high school (He told me in gentle terms that he didn’t recruit at my alma mater Joliet Catholic because we sucked at basketball, which is tough but fair). It reminded me of the traits you read about in something like How to Win Friends and Influence People and it felt flattering to have someone of Lou's stature congratulate me on my good grades and tell me to keep it up. It felt like a confidence boost and made clear to me why generations of players loved him and played balls out for him.

After a pleasantly long conversation Lou told me he had to go, but that before he left he had a gift for me. I was excited to see what he had for me, a kid he had just met a couple hours prior through the looking glass of the Bromley pool. About five minutes later he returned from his car and presented me with this: 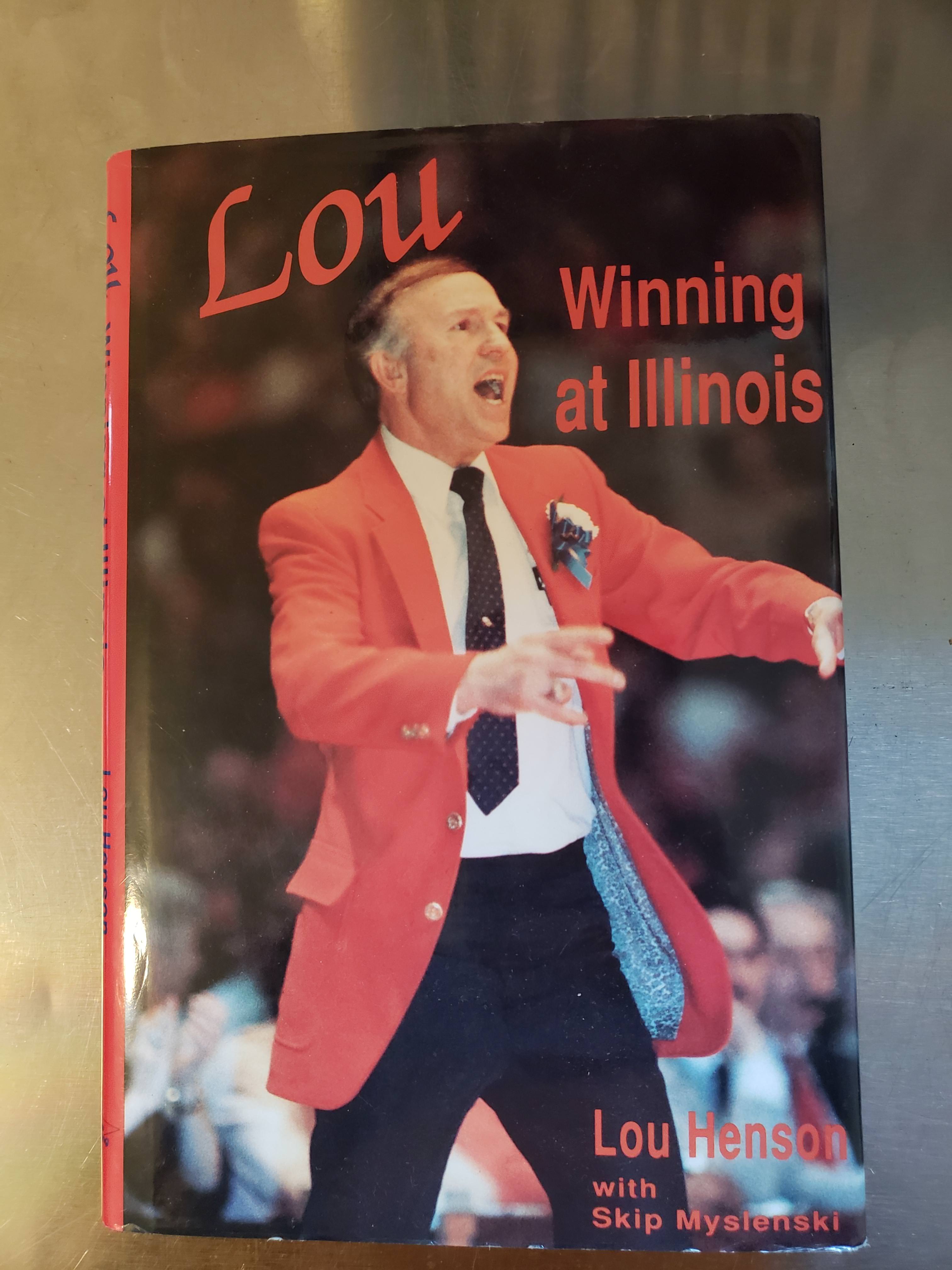 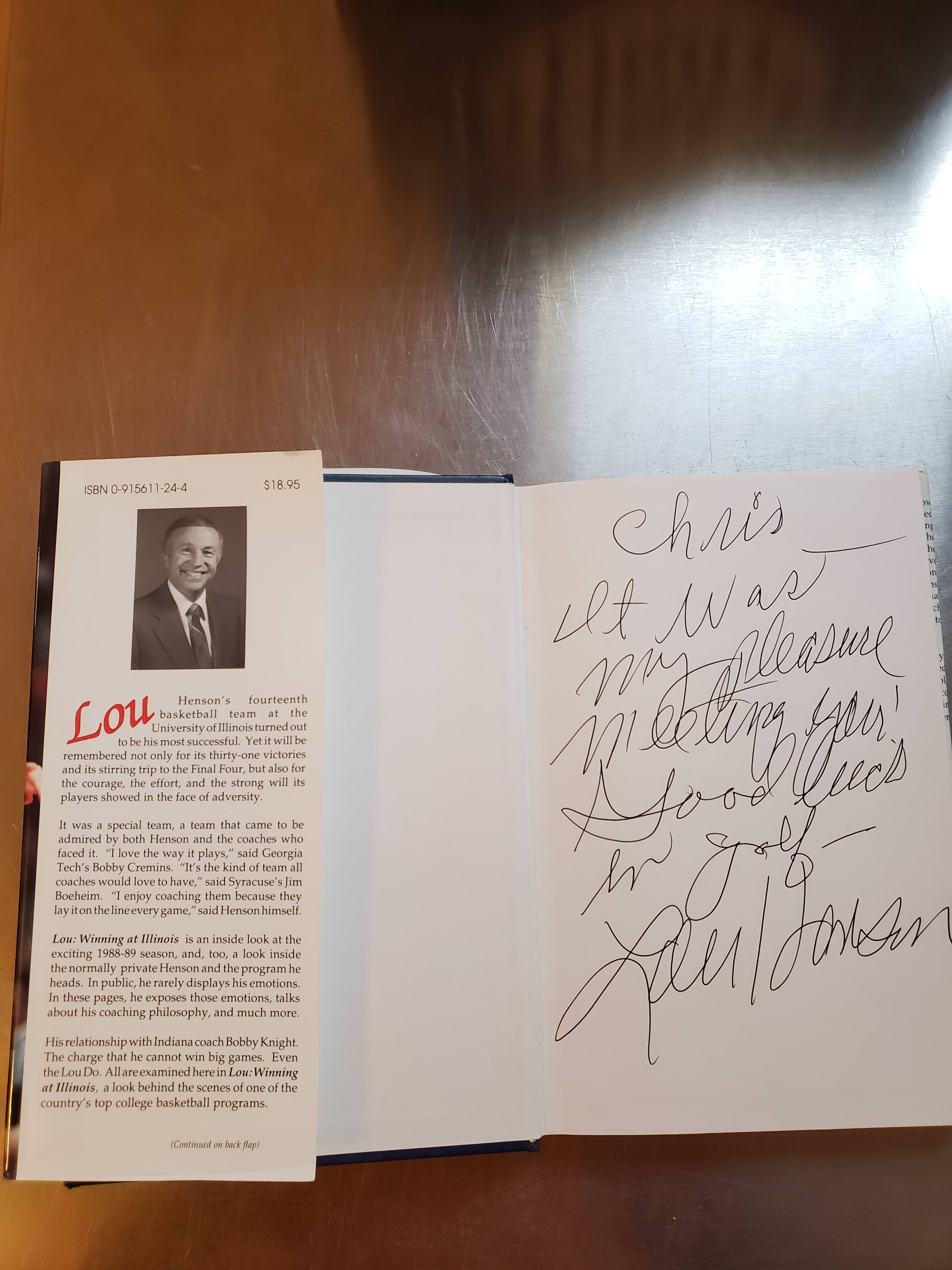 What an all-time power move, keeping a copy of your book on you at all times to sign and gift to strangers. All kidding aside, I was genuinely touched by this gesture and appreciate the personalized message he left for me. In hindsight I wish I would have told him something more interesting than the fact that I play golf on a recreational basis. The book itself is a pretty interesting read if you ever get your hands on a copy (Or just meet the man himself, apparently). It was a pleasure meeting Lou and finding out for myself that he was as good a man as others described him, and I’m glad I met him in the circumstance that I did. Encounters with drunk douches were a dime a dozen in that job; it's not very often you get the chance to chat one-on-one with an Illini legend in a dorm lobby at four in the morning.