Smith will be named the 25th Head Coach in program history.

The University of Illinois just made it official -- Lovie Smith has been hired as the next head football coach of the Fighting Illini. The announcement comes just two days after former coach Bill Cubit was dismissed by new Athletic Director Josh Whitman.

Smith, 57, was fired by the Tampa Bay Buccaneers in January after compiling an overall record of 8-24 in two seasons with the franchise. However, Smith's second year saw the team's win total increase from 2 to 6 despite starting rookie Jameis Winston at quarterback.

Lovie Smith can bring Illinois back to relevancy 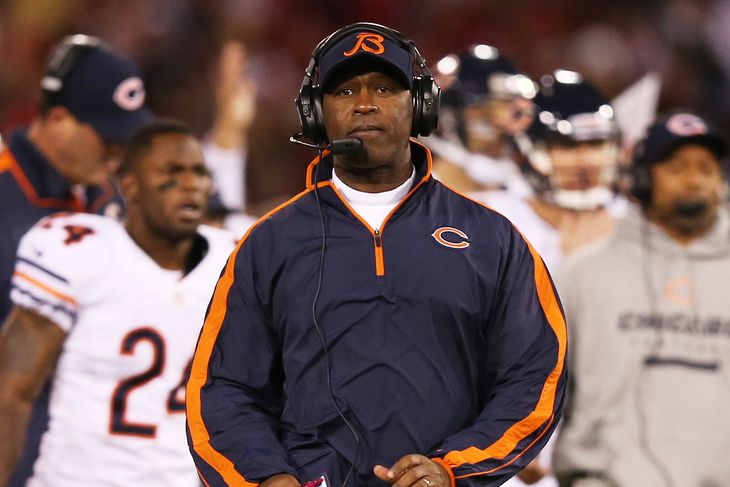 Can optimism return to Champaign-Urbana?

Of course, Smith is most well known for his tenure with the Chicago Bears. During his nine seasons in the Windy City (2004-12), he posted a record of 81-63 while claiming three NFC North titles and reaching two NFC Championship games. In 2006, Smith led the Bears to Super Bowl XLI; they eventually fell to Peyton Manning and the Indianapolis Colts.

It's still unclear which, if any, members of Illinois' staff survived the coaching change, but some moves will inevitably be made very soon. The only current opening is at offensive coordinator, as Ryan Cubit was dismissed along with his father on Saturday. There have been reports that Smith's sons, Miles and Mikel, will be joining the program in some capacity as well.

For more on this developing story, check out our Lovie Smith news feed.

Let's just get this out of the way right now: Lovie Smith is an unquestionably massive upgrade for Illinois. If you're an Illini fan that seriously thinks Bill Cubit is/was a better option, then I really don't know what to tell you. I mean, Smith reached a Super Bowl with Rex Grossman as his quarterback -- that's incredible!

The hiring of Smith is also significant because he's the first African-American to be named head coach of a revenue sport (basketball or football) at Illinois. This is a huge moment for a campus community that's often been the target of criticism due to its lack of diversity.

This article from Campus Insiders sums up my view of the hire very well.

Smith is as respectable and impressive a hire that Whitman could've made considering it's 1) March 5th, and most of the elite date options to the dance are taken, and 2) it's Illinois. So, let's just call it right now.

Lovie Smith is the greatest Illinois head coach since 1959. At the very least, over the last 85 years he's the most impressive hire the program has come up with.

Illinois has gone with the no-names, the up-and-comers, the retreads and the quirky over the last quarter century, but this time around it hired a guy who other teams might want, too.

There are absolutely some concerns surrounding the hire, though, with Smith's recruiting ability being perhaps the most pressing. The good news is that assistants typically handle a vast majority of that workload, which means casting positive impressions on recruits shouldn't really be a problem. Plus, Smith's name recognition alone should cause more in-state prospects to give the Illini a look; that's progress considering the program only signed three Illinois natives in their most recent recruiting class.

Whatever ends up happening, it'll be pretty hard for the new coaching staff to recruit worse than the previous regime(s). I have a feeling that Smith's philosophy at Illinois will revolve more around player development and game planning, so it shouldn't matter all that much anyway.

How do you feel about Illinois hiring Lovie Smith? Drop down to the comments section in order to share your opinions with the community!