We rank the basketball courts at Illinois from worst to first.

Everybody has their favorites, and everybody has their least favorites.  The brilliant minds at TCR have pulled together the rankings of favorite basketball courts from 1989 to present day at the Assembly Hall State Farm Center from worst, to first.

Now, I'm all for simplistic logos at center court and really support the less is more theory. But when you consider that there is more text on the court than there is on most billboards nowadays, there's a serious problem with this court.  Mind you, I do enjoy the paint scheme at the charity stripe, but half-court looks like something a philosophy professor would put together. Yeesh.

For whatever reason, Illinois decided to take a minimalist approach and started taking paint out of the, well, paint. Also, the logo at half-court is honestly my least favorite logo that Illinois has ever had (more on that in a few weeks). The fact that they put it ANYWHERE on a basketball court makes my stomach flip.  The font on the baseline is cool, and I'm actually okay with the "University of Illinois" written in blue against the orange border.  But this court feels like something is missing, and I can't figure out what.

Again with the minimalist thing! Ugh, this court still leaves me unsatisfied--like someone was halfway done with this design but decided to submit it anyways.  Don't get me wrong, there's actually paint in the paint, and the change from "University of Illinois" to "Fighting Illini" on the baseline, but the fact that the only blue on the floor is a border is very dissatisfying to me. We're Orange AND Blue, Illinois. Not Orange outlined with Blue.

The good news is that there's no silly logo at half-court, and there's orange everywhere,  This court is not nearly as bad as our first example, but it's still unsatisfying to me.

From the late' 80's to the mid '90's, the court design stayed relatively the same at Illinois. You'll see from the pictures below that the Big Ten logo will shift from the free throw line to outside the arc from '89-'94, but everything else was relatively consistent.

This design is closer to what I like in a court. The half-court logo is simple and symmetric, it features both school colors, and it doesn't take up a ton of floor space.  Only thing that's bizarre is the outline of the state with the silhouette of the Assembly Hall in the middle. Sure, the dome is a recognizable design, but I wouldn't ever want the outline of my arena to be seen on the floor/playing surface.

If floors could talk--oh man this design has seen it's fair share of amazing games and memorable teams.  If not for the blue boarder and orange paint, this would be the winner. It may just be my personal opinion, but I really prefer the old Big Ten logo over the current B1G at the free throw line. But the more I look at the baselines, I think I prefer "Fighting Illini" over "University of Illinois."

Assembly Hall to State Farm Center, 17,000 to 15,500 capacity, new uniforms, and a new court.  A lot of "new" was thrown into the athletic program last year that caused many fans to wonder what newly branded look Illinois would bring in. Once the new logo was released and jerseys revealed, we immediately turned our attention to the new playing surfaces.  Having not been overly impressed with the midfield logo at Memorial Stadium (more on that later), I had a bad feeling that the new basketball court would leave me disappointed. Instead, we got a playing surface that truly looks awesome.

First off, there's blue. The baseline lettering looks amazing, and the outline of the Block I at half-court pops whether you're in the 300 level, or watching from home. Staining inside the 3-point line is tastefully done, and the stained outline of the state is a nice, subtle touch that truly adds character to the floor. The ONLY thing I could do without is the red State Farm logos. If you feel the need to fill that space, maybe name the floor after Lou Henson (while he's still around pleeeassseeeee) and put his signature there. State Farm can have their logos, but make them white (or blue) and put them in the orange border.

White borders on an orange background, no arena logos in-bounds, primarily orange feel with flashes of blue, and you have a solid basketball court design.  Again, I do prefer "Fighting Illini" over "University of Illinois" on the baseline and while I do like the half-court logo, it's not symmetrical which does make for some odd pictures from certain parts of the stadium. But I've gotta hand it to the primarily orange look and consistent stain from baseline to baseline. It's a sharp, classic design that looks rock solid no matter where you sit. 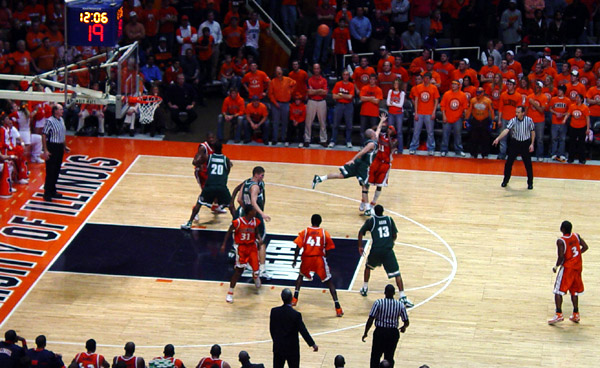 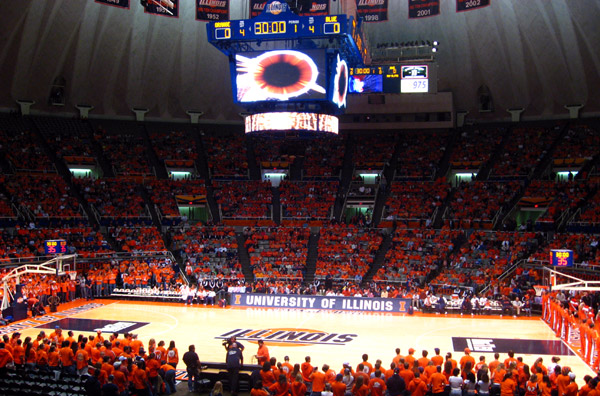