Players are flying off the board, but there are still plenty of options for John Groce and the Illini. Where will they end up?

As the final July evaluation period wraps up this weekend, John Groce and the Illinois coaching staff will be on the road at AAU events for the last time until next Spring. So far, the Illini have handed out at least 26 scholarship offers to players in the class of 2016; 20 of those have been aimed towards filling team needs at point guard and low post.

For the first time in awhile the program hasn't secured a verbal commitment prior to 'official visit' season in the Fall. Malcolm Hill (2013), Michael Finke (2014), D.J. Williams (2015), and Aaron Jordan (2015) had all given their pledges either before or during their junior year of high school. It's unfortunate, too, because the staff won't be able to give the, "hey, look at your future classmates--they're really good!" pitch this time around.

So that's the bad news. But the good news is that recruiting season is just getting underway and there's plenty of time to land some players. So as we wait for that first domino to fall, here are my predictions for some of Illinois' remaining 2016 recruiting targets:

Highlights from the NBA Top 100 Camp in June.

Simpson was believed to be leaning towards Xavier at one point until he postponed his original announcement--now the recruitment is up in the air. He's previously stated that his top six schools are Illinois, Iowa, Purdue, Iowa State, Xavier, and Texas Tech, but it sounds like he's willing to listen to other offers.

And those other offers will certainly be coming. The 5'11 guard played out of his mind on the Nike EYBL this Summer and he's at least put his name in the conversation as one of the top point guards in the country.

Illinois, Michigan State, and Purdue look like the three teams to watch here. 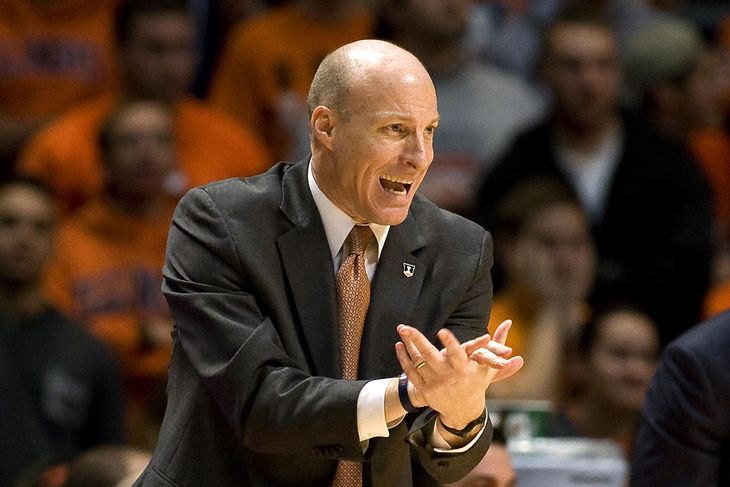 Click here for more info on the program's targets

Simpson doesn't have an offer from the Spartans yet, but they've expressed interest and have been at a lot of his games this Summer. However, any offer is going to hinge on whether or not Tom Izzo can land Cassius Winston, his top target at the position. I think this would be Simpson's choice if given the opportunity, but the Spartans are the overwhelming favorite for the Detroit native.

So then there's Purdue. Matt Painter is in the same situation as John Groce--he really, really needs a point guard. Simpson is already planning a visit to Purdue in August and there's been no word about such a trip to Champaign. This decision could, realistically, go either way if Illinois manages to get him on campus, but they may not get that opportunity. Only time will tell.

Like Simpson, Moore's stock has been blowing up over the past month; this comes on the heels of a very good junior season playing alongside Marcus LoVett Jr. at Morgan Park. Moore hasn't cut his list, but his growing offer list includes Illinois, Iowa, California, Memphis, Pittsburgh, and St. John's.

This particular prediction comes with a caveat. If Moore's play starts to attract offers from better programs, then I don't think he'll end up as a member of the Illini.

Having said that, Illinois and Iowa have been putting in some serious resources for the 5'11 guard and they appear to be the frontrunners. Both schools are surely promising significant early playing time so this could very well come down to recent success and surrounding talent.

Highlights from junior season at Simeon.

Will Zach Norvell be the next Simeon player to suit up for the Illini? That's a question we've been asking for some time now and I'm not so sure we're any closer to finding out the answer. The 6'4 shooting guard from Chicago is rated as the No. 82 player in 247Sports' composite rankings and he holds offers from Illinois, Oklahoma, Florida State, Memphis, and Bradley.

Norvell took an unofficial visit to Illinois back in June, that's at least the second time he's been down to Champaign (it could be more because he knows so many of the players on the team).

Shooting guard will be Illinois' strongest position moving forward, but you know the old saying--you can never have enough shooting. It'd probably take a year or two before Norvell sees consistent playing time, but he has the potential to be an above-average player in the Big Ten.

There have been some reports lately that the Illini coaching staff is making a push to land Sneed. I talked with Rock M Nation's Sam Snelling the other day about the Missouri native and he believes Illinois and Mizzou are the two frontrunners with Xavier and Cincinnati lurking not too far behind. He went on to state that the hire of Corey Tate was supposed to help lure Sneed, but the coaching staff has been showing a lot of interest in four-star prospect De'Riante Jenkins, who plays the same position.

I think Illinois will end up with either Zach Norvell or Xavier Sneed; with only three scholarships available, the coaching staff probably won't be accepting commitments from two wing players in this class. So it'll just depend on what needs are being prioritized.

Even in a perfect world, I'm not entirely sold that Illinois would be able to out-recruit the Tigers here. With the loss of Montaque Gill-Caesar, Mizzou has a pretty sizable hole on the wing and there will be plenty of playing time available. In Champaign, a senior Malcolm Hill and a sophomore D.J. Williams would be listed higher on the 2016-17 depth chart.

This recruitment is just now kicking into first gear and there's a long way to go. That's another way of saying that I have literally no idea. However, I do think the Illini will have a great shot if they can find a way to get Brown on campus sometime in the next few months.