The Illini welcome the Maryland Terrapins to town on Wednesday for their first-ever game as Big Ten foes.

Share All sharing options for: Game Preview: Illinois vs #11 Maryland

The Fighting Illini received some devastating news on Wednesday as the team announced senior Rayvonte Rice suffered a broken hand during practice and will miss a significant amount of time. However Illinois has been struggling even with Rice in the lineup. After dropping their first two games of Big Ten play, the team has lost four of the last seven and they now sit with a record of 10-5.

Maryland, on the other hand, has been fantastic in their first season as a member of the Big Ten. The No. 11 Terrapins have secured wins over No. 13 Iowa State, Oklahoma State, and Michigan State this season and their lone loss was to No. 2 Virginia in the Big Ten/ACC Challenge.

Wednesday will mark the first-ever Big Ten game between these two schools and it's their first matchup since the 2011 Big Ten/ACC Challenge (Illinois won 71-62 in Champaign). Maryland leads the all-time series 5-4, but the Illini have won the last two contests.

Is this really too much to ask for? Illinois has completely given in to late-game pressure this season. Someone on the floor needs to step up and be a leader while opposing teams are making their runs.

"I'm not mad that we lost to a ranked team on the road, I'm mad about how we lost" Seems to be a reoccurring theme this season.

2. Keep Melo Trimble out of the lane

Melo Trimble has been fantastic for Maryland this year; the stud freshman point guard is averaging 16.2 points, 4.1 rebounds, and 3.0 assists per game while shooting 44.2% from the field. Trimble is great at working his way through the lane off of pick-and-rolls as he's shooting 53% from 2-point range. He's also getting to the free throw line at an extraordinary rate for a freshman. His FTRate of 93.8 is 14th in the nation and 6th amongst players from high-major schools. When he gets to the line, he's shooting 87.6% (106/121) on the season.

The key for the Illinois defense will be to keep Trimble out by the three-point line where he's only shooting 35.2%. Assuming the Illini stick with their usual man-to-man defense, this particular assignment may be left up to Starks/Tate since Dez Wells (6'5) and Richaud Pack (6'4) will be left up to Illinois' wings.

Rayvonte Rice out with broken hand 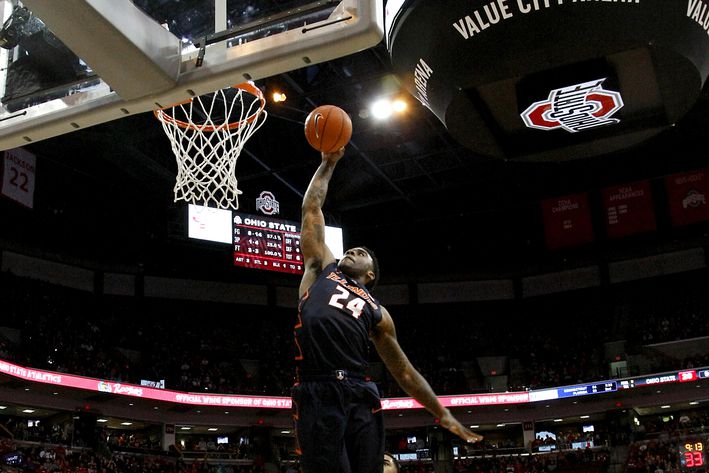 3. Nunn and Cosby need to step up

Rayvonte Rice was averaging team-highs in points (17.2), rebounds (6.9), and steals (1.8) while shooting 51.5% from the field (48.3% from three). That's incredible. Replacing his production may seem impossible, but he was taking a team-high 26.2% of the shots while he was on the court. Someone, or multiple players, will have opportunities to make up some of that output.

Malcolm Hill is the name that comes to mind, but he's already been playing very well--you can't ask much more from him at this point. That means Kendrick Nunn and Aaron Cosby need to drastically improve their production.

I think the Illini will respond to the Rayvonte Rice injury better than most people expect. As I said above, someone will have opportunities to fill the void in production. Having said that, Maryland should win this game--they're the better team in almost every aspect now.