Examining the Problems for Illinois Basketball

Expectations were sky-high for an Illini team that is now 0-2 in the Big Ten. What is up with this team?

Share All sharing options for: Examining the Problems for Illinois Basketball

This past weekend the Illini dropped another conference game to Ohio State and remained winless in the Big Ten. Through these first two games there have been a seemingly countless number of problems that fans didn't expect from this team heading into the 2014-15 season. Obviously one of the biggest issues has been second half collapses; in each of the team's five losses this year, they've either lead or been tied with their opponent before losing by as many as sixteen. But there have also been other major flaws such as a struggling defense and horrible turnover numbers. Let's take a closer look at some of the reason the Illini are struggling this season.

Illinois has been tied or has led in every single one of their losses. Every team goes on their runs but it seems Illinois can't stop the opposing teams' streak and can't start one of their own. Their offense goes quiet and their defense can't seem to stop anybody. A 5-0 or 7-0 Ohio State run quickly turns into a 17-0 run in the blink of an eye, and suddenly the game has spiraled out of control. No leaders have stepped up and tried to prevent a run from "going too far," but maybe that's because their leader is sitting on the end of the bench with a torn ACL.

On Saturday, Ohio State went on their 20-4 run and and took a big lead after trailing the Illini by as many as eight. Instead of trying to hit some mid-range shots and chip into the lead the Illini laid down and acted as if they'd already lost the game.

The game that Bryce attended--the Oregon matchup in Chicago--also included a huge second half collapse. The Illini had a thirteen point lead that was shrunk to four going into halftime. Then Dillon Brooks had the best half of basketball of his young career. He ended up with more points against the Illini (24) then he has against anybody else all year. The defense could not stop him and nobody, other then Rayvonte Rice, was putting together anything on offense.

It was the same story against Michigan except that Illinois had an even bigger lead. Aubrey Dawkins went off for 20 points and that was it. Dawkins' best scoring game other than the one against Illinois? Five points against Coppin State. If you didn't see what he did against Purdue in the Wolverines' second conference game, well, you missed nothing.

So how can this problem be fixed? As Jeremy Werner put it: a little toughness and togetherness. That goes back to Tracy Abrams not being on the floor. We need someone like Nnanna Egwu to take this role and have the team show some fight. What happened to this quote Egwu made before the season? To further demonstrate the magnitude of each second-half collapse, here's the chart from Trevor's recap of the Ohio State game. 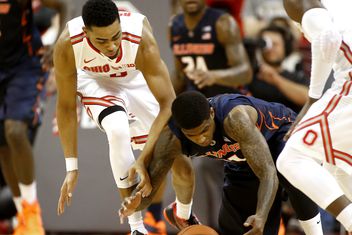 The Fighting Illini played well in the first half against the Buckeyes, but a late collapse was once again the story as Illinois dropped to 0-2 in the Big Ten.

We had a great defensive unit last year. Abrams, Kendrick Nunn, Rayvonte Rice, and Nnanna Egwu were a combined force; I'm not including Malcolm Hill, but he got better defensively as the year progressed. This year the issue seems to mostly be help defense.

Teams are getting easy layups and wide open shots against the Illini (i.e. Ricky Doyle hitting four straight uncontested layups). There's no defense coming off of pick-and-rolls and there's zero presence in the lane. Many people think it's because of Egwu's aggressive hedging; some of the time it is, but he did this all of last year and it wasn't a problem. Guys aren't rotating in and protecting the basket which is the number one thing you have to do on defense--especially one that relies so heavily on the pick and roll.

This year, the issue seems to be mostly help defense.

One other difference from last year has been Kendrick Nunn's play. He hasn't gotten as many steals and doesn't seem to have as much "bounce." He's looked a bit different out there and maybe that can be attributed to the knee procedure he had during the offseason. This may also be the reason he hasn't been as aggressive on offense.

Last year Coach Groce used a lineup change to spark the team. Could that work again? After the Michigan game I thought Jaylon Tate should starting over Ahmad Starks. The offense just flowed better when he was out there. However, he didn't help his case much in the loss to Ohio State. Maybe a change would help take some pressure off of Starks and get him playing better and with more consistency. It certainly worked with Tyler Griffey in the 2012-13 season and he was a key player down the stretch. I don't really see anybody else coming out of the lineup, but maybe if Leron Black can step it up we can go big and have him play the four and Malcolm Hill play the three. Here's fellow staff writer, Trevor thoughts on a possible lineup change:

The Illini have looked dead at times on the court, especially in the second half of recent games. But there are really two problems with a potential lineup change. The first is that the current starting five has looked just competent and competitive enough to maintain their roles. It's a silver lining, yes, but at least the Illini have stayed with quality opponents for about 50 or 60% of the game. Ahmad Starks, Kendrick Nunn, and Aaron Cosby do have the ability to make shots. Rayvonte Rice has shown he's a force to be reckoned with. Malcolm Hill has had some fantastic games this season. It's just a matter of getting them all to collectively play like a cohesive unit at the same time during the same game.

The other issue with attempting to change the starting lineup is simple: who do you go to? Maverick Morgan and Jaylon Tate have impressed me as of late coming off the bench, and maybe Groce would consider a substitution of Tate as the starting point guard in front of Starks, but other than that your starting rotation options are limited. I'm not a big fan of Leron Black starting. He has looked lost on the court as of late and I only fear the heat under John Groce's seat would rise if he bumped Black into the starting lineup. Still, this team needs a spark to jumpstart their conference season and I would not at all be opposed to Jaylon Tate starting and Maverick Morgan getting more minutes.

Another thing that sparked the team last year was a big win over a quality opponent. That game was at Michigan State. On Tuesday the Illini have another big game against as they prepare to take on the No. 12 Maryland Terrapins in Champaign. A victory would certainly be a big confidence booster going forward in conference play.