It was another close one with Penn State, but Illinois prevailed.

Share All sharing options for: Illinois 60 Penn State 58: Malcolm Hill is a Beast

Malcolm Hill put the team on his back today. The sophomore forward had 27 points and led Illinois (14-8, 4-5) to a 60-58 win over Penn State (14-8, 2-7). In what was virtually a must win game he came up huge. He racked up his points all over the floor whether it be his threes, jumpers, or layups. His biggest shot, however, came at the very end of the game. With the shot clock off Penn State doubled Hill at the top of the key. He drove by both the defenders and rolled in a left hand layup to seal the victory over the Nittnay Lions. Well I shouldn't say sealed. With four seconds to go DJ Newbill ran all the way down the court and missed an open layup that would have sent the game into overtime. Here's some thoughts on today's game:

1. These Games Are Always Close

Every time the Illini face Penn State it is supposed to be an easy victory for them. And every year the game is extremely close. Last year we won a close game at State Farm Center and then turned the season around with a narrow win at Bryce Jordan Center (one of my personal favorite named gyms). In years past, however, they have knocked us off several time when they shouldn't have. There are always lots of fouls and some big shots these slow moving contests where 60 is a high score. 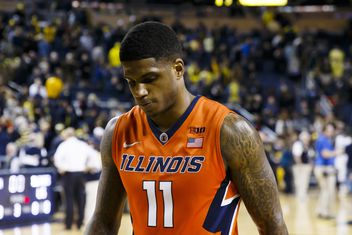 2. The Big Men Have Improved

Maverick Morgan and Austin Colbert played well today. We are really going to need them to continue that because today we were only able to play seven guys. I thought Maverick's jumper looked good and Colbert was better than usual. Neither was great but they did their job and that is what we need them to do. Leron Black and Nnanna Egwu didn't play particularly well and the extra minutes from Morgan and Colbert really helped.

Hill can turn it on at any time. His crossovers that led to open jumpers today were fantastic. He continues to score in a wide variety of ways and kept the team afloat today. Kendrick Nunn had an off day, but Hill saved him and many others. He has had a couple of games where he scores a bunch (Maryland, Villanova) so it will be interesting to see if he can have another one in the next couple of games. The team is going to need the production from him the rest of the way through. Possibly the best part about all this though is that he is just getting started. I can't wait to watch Malcolm in his junior and senior years.

Here was the game winner:

KING OF THE HILL pic.twitter.com/Ys5EbyCS7e

4. We Need to Keep Winning at Home

If we can continue to win our home games we will be in good position once Rice returns. Today was a big win because we didn't play all that well but still found a way to win which is a must at home. If the Illini can steal a road win or two once Rice comes back it would put us in even better position.

Looking ahead, the Illini face Rutgers Tuesday night at State Farm Center. It doesn't look like Rice and Cosby will be playing as an earlier report suggested they would both be out at least two games. We'll have to see who steps up against the Scarlet Knights.