We're a week into the year and undefeated while Northwestern is handing out mixed wristbands and on the verge of an 0-2 start. Much like Mos Def said on The Ecstatic, this is truly life in marvelous times.

@Champaign_Room who will be the 3 other teams in the CFB playoff with the Illini? #AskTCR

Mike, I had missed you dearly and was greatly concerned you had died. It is good to hear from you again, old friend. And you've even updated your question from last season! Growing with the times and everything!

But I'm going to take this to mean what four teams do I think will make it to the football final four. Sidebar: is there a better name for it than the College Football Playoff yet? I really hope we find one soon. But back to the point. No independent school or mid-major is looking likely to crack the top four this year, so we're down to essentially the top teams from the Power 5 conferences. And honestly, I don't think the Big Ten makes the field this year. Michigan State is good, but unless they beat Oregon this weekend, they don't make the playoff. So give me Oregon, Oklahoma from a down Big 12, Florida State, and Georgia. The Bulldogs were a force of nature this weekend. I like them to be the SEC rep this year.

@Champaign_Room Saw the team ran out of an inflated helmet this week. Missed opportunity by not making it a Shield? #asktcr

Can't run through the shield, it would make the shield look weak. If they had the shield collided with another logo in a video akin to those from MNF intros from my childhood? Sure, that would be okay. But no, no destruction of the new shield logo is allowed.

@Champaign_Room when it comes time to replace Beckman, does Vincent Adultman get an interview? #AskTCR #businessfactory

Haven't gotten around to watching BoJack Horseman yet, so the reference is sadly lost on me. Sorry Mike.

@Champaign_Room What is more representative of the offense this season? Quarters 1-3, or quarter 4? Game 1 rust or real issues? #AskTCR

@Champaign_Room What were the most surprising observations (good/bad) in game 1? Either from individual players, units, or the team? #AskTCR

I'm hopeful that the 4th quarter will be more representative, but like most things in life the answer probably lies somewhere in the middle. Was Wes Lunt rusty and likely full of jitters? Yeah, I have no problem believing that. He hadn't actually played in a game since the 2012 season. No amount of practice or scrimmages can accurately measure up to an opposing eleven doing everything they can to make you fail on every play. So I guess my answer is we'll have to see how Lunt and Bill Cubit respond this Saturday against Western Kentucky.

I'm struggling to come up with a good most surprising observation from the Youngstown State game, so I guess I'll have to go with how well the freshmen receivers played. Mikey Dudek and Malik Turner didn't look like true freshmen playing in their first collegiate football game, which is the best compliment I think you can give. The other side of the coin would be how little Josh Ferguson was used. The offense can't succeed without him constantly getting the ball. He's the best and most established playmaker we have. Hopefully this changes by Saturday.

You've just received news of a zombie apocalypse. It will be by you in 1 hour. What do you do?

Well there are certainly worse places to be stuck than Manhattan, Kansas when a zombie outbreak is about to happen. From my apartment, I would drive the 2.4 miles to Walmart and stock the hell up on canned goods, weapons, tools, vitamins, camping supplies, and beer. Throw it all on a credit card and max that sucker out because the world is ending so who cares? This should give me about 30 minutes to swing by the vet school (1.5 miles away from Walmart), grabbing Rebecca and friends as well as a ton of medical supplies. You know who I want with me during an apocalypse? A bunch of people with medical training. In the remaining ten minutes or so, we cross the parking lot and enter Bill Snyder Family Stadium. I was torn between this and the massive grain elevator in town, but then remembered one of the two is a castle. 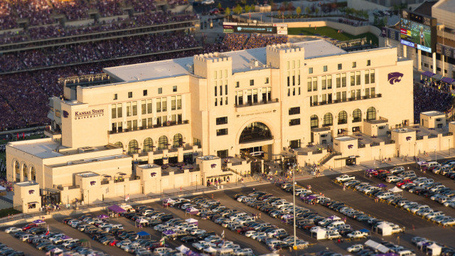 Having worked on the construction of said castle stadium, I know my way around it very well. It goes up eight stories, has its own generators and water supplies as well as kitchens and bathrooms, and happens to be one of the tallest places in town. It's also located right across from the vet school, a regional hospital, and NBAF (a national biosecurity facility made for researching anthrax outbreaks). Fort Riley, home of Big Red 1, is a mere 20 minutes away down the road. We'd just live happily in the upper floors of the stadium until the military swooped in.

@Champaign_Room If you had the means to purchase any piece of sports memorabilia from a museum/HOF/etc, what would you get? #AskTCR

Whatever the Hall of Fame has from Mark Buehrle's perfect game in 2009. My favorite sports team is the White Sox and Buehrle has been my favorite Sox player (I'm just a bit too young to actually have memories of Frank Thomas' peak years). So I would want something from that magical July afternoon to put on my mantel.

@Champaign_Room Can I start printing the "We Want 'Bama" shirts yet? #AskTCR

As long as you promise to send me both an orange and a blue one, yes.

#AskTCR How does a major site like @Champaign_Room deal with anonymous hate for its content, or is it an issue?

First, thank you for calling us a major site. In the grand scheme of the SBN collegeverse, we are more of a middle tier one, but it's always nice to hear how much our loyal fanbase likes/appreciates us. So thank you again for that.

We get some, but not anything overwhelming. People I've upset on Twitter have come to the site and created such clever names as "MarkSucksD". A former troll from South Side Sox briefly tried following me over here last year. And then there are the standard SBN trolls who create accounts on seemingly every site and are quickly sent back to the ether. SBN has wonderful tools to root out who people are and we have great support from the higher ups if things get a little too intense. Luckily, we haven't really had that issue here and we're almost at our second birthday.

@Champaign_Room Scale 1-10 your nervousness for WKU? I'm at about an 8.5 #AskTCR

Put me down for a 7. Western Kentucky is a pretty good small conference school. They curb-stomped Bowling Green last week. Bowling Green went 10-4 last season with a three point bowl game loss to Pitt. Last season under exiled head coach Bobby Petrino, they upset Navy, an ultimately 9-4 team. So yeah, there is definitely reason to worry. They're a team that can put up points in bunches.

But do I expect them to have as strong of a week offensively as they did last week? No. Brandon Doughty, their senior QB, threw 56 passes and completed 46 of them for 569 yards and six touchdowns. That's an 82.1 completion percentage on 12.3 Y/A. His season totals in 2013 were 246 of 374 (65.8%) for 2,857 yards, 14 TD, and 14 INT. Is it possible he made a giant leap forward in talent over the offseason? Yeah, sure. But not probable. He can't scramble, so as long as the Illini can blitz effectively, Doughty shouldn't have another monster game like that.

I wish we were playing an easier game this weekend and I'm definitely worried about the outcome, but I think Illinois can win this one.

@Champaign_Room If John Groce were a Tarantino film, which one would he be? #AskTCR

Let's go pull up the ol' filmography so I don't miss any. Here we are. I think this might be easier to do via process of elimination. Unless his tenure here ends terribly, it can't be Reservoir Dogs. Pulp Fiction has far too many main characters to be boiled down into one guy. No living person has ever seen Four Rooms. I want to use Jackie Brown because I just rewatched it last week, but sadly it also doesn't really fit. No, the only answer that seems to work is Inglourious Basterds, and it's not even that great of a fit.