B1G Power Rankings: Week 5 and Beyond

An undefeated falls, a expectations are upheld, and a jug finds safety.

Share All sharing options for: B1G Power Rankings: Week 5 and Beyond

We're now into the main course of the college football season. There's very little non-conference filler, it's (mostly) B1G from here. This is where teams are truly measured.

There were 5 B1G conference games this weekend there's 5 next week, and the week after. It goes on like this for awhile before we get the perfect septenary B1G weekend (the weekend before Thanksgiving). But it doesn't mean we're missing out. No, the conference still provides great games each weekend with some of the best coming in Week 6. So before you dive into what's ahead, make sure to look at how teams are doing. Past performance predicts future success.

There has to be a certain part of being a fan of a Top 10 that's boring. Half the games your team plays are guaranteed wins before the season even starts. Where's the suspense in that? Why watch? You know what's gonna happen. It's like you're content and bored. Michigan State has been sleep-destroying for weeks now. Next week is Nebraska, one of the best B1G games all year. Just hope the Spartans aren't too drowsy.

I saw someone describe the Nebraska running game as "hot knife through butter." Apt. There were 458 rushing yards Saturday night, a 6.5 average. They were simply a better team athletically.

The Badgers had a very Illini day on Saturday. A solitary field goal and only 139 offensive yards were all that they could muster, boringly tied with USF at halftime, 3-3. Seventeen third quarter points and the Badgers were back flying away like badgers usually do. Melvin Gordon ran for a pedestrian 181 yards and 2 touchdowns to only slightly improve his Heisman resume.

The minor in-state rivalry didn't turn out to be much of a contest, although OSU's secondary continues to be the team's biggest weakness. But an Ohio State weakness is an average unit on most other B1G teams. They're still one of the best teams in the conference, especially as J.T. Barrett gets more reps. He had 79 yards rushing, 330 passing and 4 passing touchdowns.

The Terps have done something that Rutgers hasn't: getting a B1G win. And, boy, did they make it look good. Both sides of the line created plays and showed that this team deserves a place in the conference. That place is yet to be decided -- somewhere in the middle of the pack, or in the upper half? We'll know more after Maryland plays host to Ohio State this coming weekend.

Gary Nova threw three first half touchdowns and morphed into the ALL-TIME GREATEST QUARTERBACK IN RUTGERS HISTORY!!!! Or maybe just the all-time leader in passing touchdowns with 60. He has to throw 1,779 more yards to actually become the GREATEST. That's an average of 255 yards a game for the rest of the season including games against Michigan State and Ohio State. Good luck Gary Nova, second greatest Rutgers quarterback of all-time.

Fresh off becoming the new starting quarterback, C.J. Beathard began growing doubts. He threw a pick-6 early in the game while the offense had only 10 yards in the first quarter. After that, the Hawkeyes slowly reclaimed and built a lead though running the ball and better passing from Beathard, who finished with 245 yards and a touchdown.

The Jug has returned, and with it a sense of pride not seen in the Land of 10,000 Lakes in nearly a decade. It came through a strong rushing performance for David Cobb (183 yards) and the defense manhandling the Michigan offense. Now they continue with their B1G success by taking on Northwestern in Minneapolis.

From the highs of beating tigers, to the lows of losing to turtles, it has been a crazy week for Hoosier fans. Tevin Coleman ran for 122 yards but the rest of the offense could never get going. And, once again, Indiana's defense couldn't stop anything. Maryland gained 484 yards on the day. Is Indiana a bowl team? Vote in the poll below.

Northwestern brought their defense into Happy Valley and Penn State had no way to handle them. It was the perfect matchup for Fitzgerald and his previously bottom-dwelling Wildcats. Penn State had 3 first downs and only 266 yards of offense. And even with all that losing to start the season, the Wildcats are undefeated in conference play. 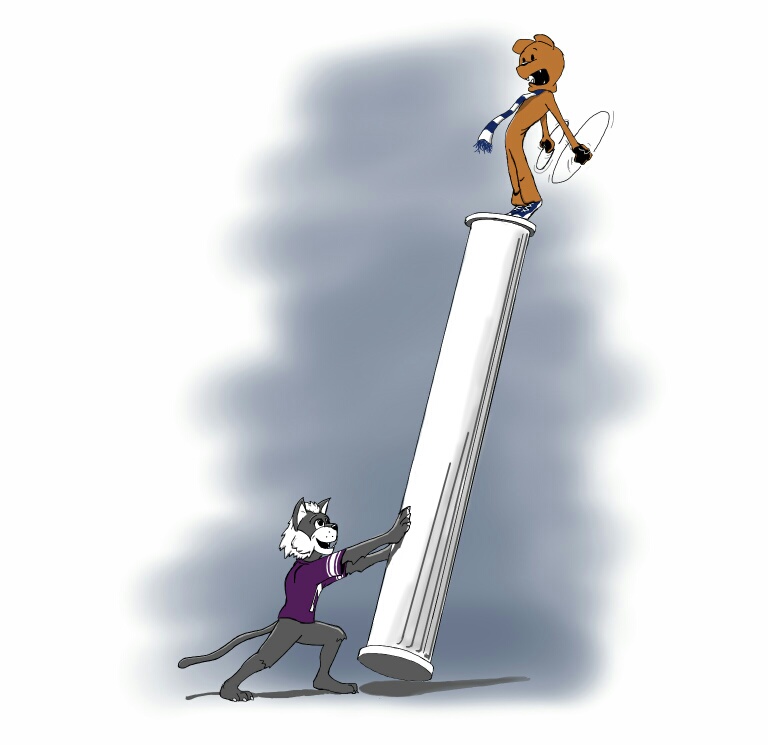 I've had this image in my head of the Penn State mascot standing on top of a pillar. The pillar would shrink circumference and grow in height. Every week it wobbled but never fell over, only to change shape more each time the ratty old lion regained balance. Now, Penn State has fallen. They've crashed from the heights. The sanctions that never took effect before finally showed the importance of depth, taking a undefeated team to its knees.

We knew it was going to be a loss and life will go on, but it can still be hard to watch. Beckman still has a chance to keep his job, whether you agree he should or not. We're not even half way into the season and a bowl game is still a very decent possibility. Next week's game against Purdue will be the best preview of the future yet this year.

We make jokes about tire fires all the time, but this just might be the best use of that description ever. My advice: stay out of Ann Arbor unless you're the one carrying the torches and pitchforks. At least the Jug is safe.

The highlights of this game are, and are most certainly limited to: a first-quarter pick-6 by cornerback Frankie Williams; a field goal; a very good college education.