In the wake of yesterday's great news, there seemed to be a bit of a dearth in #AskTCR questions for this week. So I took to begging and the problem fixed itself right quick. Thank you for making my job easier.

@Champaign_Room Going to IL-NU. How do I explain to Huskers that losing to the 2015 Natl Champs isn't a reason to commit suicide? #AskTCR

Remind them that they still have PepperJax and that alone makes life worth living. Last night, Rebecca called me telling me that we're getting a PepperJax here in Manhattan soon as well as a Which Wich? and I am going to become the fattest man on the planet and will regret nothing.

#asktcr if illini lose to purdue but upset NEB/OSU or Wis, does beckman get replaced?

@Champaign_Room #asktcr Can the O-line issues be from the quick OL coach change or is it something else?

It would depend on how the rest of the season played out. For simplicity's sake, let's say the upset comes at Nebraska. We'd be halfway through the season with a record of 4-2. The Purdue loss would look awful, but the Washington loss is likely going to look better almost every week. And that win over Nebraska? That would be Beckman's biggest win with the Illini. That would leave him six more games to get two more wins with matchups against Minnesota, Iowa, Penn State, and at Northwestern. If you can beat Nebraska in Lincoln, you can go .500 against that group.

As for your second question, that could be a part of it. I don't have enough information to say it for certain though. I doubt the blocking schemes changed enough since it's still Bill Cubit calling the shots, so I'd put my money on it being something else. No real idea what that something else is though.

@Champaign_Room Would anybody at the league office ever admit it wasn't really targeting? #AskTCR

For those somewhat out of the loop, this is in regards to Earnest Thomas III's ejection from the Texas State game for "targeting". The rule was created with good intentions, but that doesn't stop it from booting players who weren't targeting, which is what happened in this instance. I wouldn't expect anyone at the league office to admit it on record because you simply don't do that to your refs. If they make a massively egregious mistake that alters the outcome of an entire season, you can throw them under the bus. This was a bad call, but Illinois still won and Earnest will be playing against the Huskers this weekend so it's more of a no harm, no foul kind of mistake. It sucked, but all it really cost us were some sweet ET3 counting stats and maybe some peace of mind.

One Josh Ferguson scamper notwithstanding, our team seemingly takes forever to get going on football Saturdays. I’m trying to think of things that actually take longer to get up to operating speed/temperature. My short list includes 1). Radiator heat 2.) A locomotive fully loaded with freight cars. 3.) The economy.

Things that take longer to get going than our offense

6. Bruce Weber getting a five-star to actually play at Illinois (can now read K-State)

7. Uranium to reach its half-life

8. Bryce being able to drive

#AskTCR so Vic Koenig's UNC defense gave up a gazillion yards on Saturday. This is his 3rd year at UNC & that happens. Do we still miss him?

The Illini defense probably would not have fallen off nearly as hard as it did had Vic stayed and he's probably still a better DC than Tim Banks. But yeah, something seems wrong with that Tarheels defense. There's nothing wrong with being soundly beaten by this year's ECU squad. They're a damn good team. But you should never give up 789 yards. That's more than either Illinois or Michigan racked up in the ridiculous 3OT game back in 2010.

And then you see that they also gave up 346 yards to Liberty (FCS) and 509 yards to San Diego State, who only managed 215 yards against Oregon State and wow. Conference play hasn't even started for UNC, meaning they still have to travel to Clemson, Notre Dame, Miami, and Duke. It's going to be hard to turn that train wreck around. It's okay to miss Vic, but not very much. Let's see how we do against Nebraska on Saturday and then reassess.

@Champaign_Room #AskTCR What is the ideal grain-to-marshmallow ratio in a spoonful of delicious Lucky Charms?

I don't think I've eaten cereal once in the past decade due to my general dislike of milk. Half grain/half sugar shapes is the proper ratio though. Screw everyone else eating out of  that box. The non-marshmallow parts of Lucky Charms are absolutely disgusting. It's like you're ripping the box into pieces, putting it in the bowl, drowning it in milk, and praising yourself for the fiber while still eating children's breakfast.

In Saturday's football game after gaining a first down on the final possession of the game and effectively clinching the seven-point win, we inexplicably called a running handoff to Jon Davis on the final play rather than just snapping it and taking a knee.  What the hell?

Your guess is a good as mine. That's a pretty baffling move. If we're up by more than a touchdown, sure, give the big man a carry. Why not? But in a one score game? Take the knee, go shake hands, and be happyish with the W. This ain't Madden. That can very easily bite you right in the ass.

@Champaign_Room 2015 marks 30th anniversary of Farm Aid at Memorial. Who would u want to see perform if it was held again? #AskTCR #ledzep

Judging by the fact that you want Led Zeppelin, I'm assuming we can pull bands out of time to see them because why see them if Bonham isn't drumming? Just wouldn't be the same, right? In that case, I think my old nomme de plume gives my answer away: I would want to see the Wu-Tang Clan at the height of their majesty. Let me experience the insanity that was ODB before the drugs took him completely down. If I can't do that, I'd like to see the Walkmen. They recently disbanded and I never got the chance to see them live, which I find disheartening as they seem to be the type of band that would actually sound good live.

@Champaign_Room #askTCR How will it feel win when Jalen Coleman dunks on Indiana at Indiana and we win 80-63?

#AskTCR Pick one assistant from each of the power five conferences. Put them all in a cage match. Who emerges to take Beckman's job?

A forced abduction cage match in which the winner is contractually obligated to coach the Illini to glory? I love it.

Are you sensing a pattern? Other than Narduzzi, I went with offensive coordinators from disgustingly prolific passing offenses. If this was a true battle royale, I think Narduzzi walks away the winner because have you seen how his defenses play? There is no mercy. There is no showboating. There is only pain and death and your utter destruction. 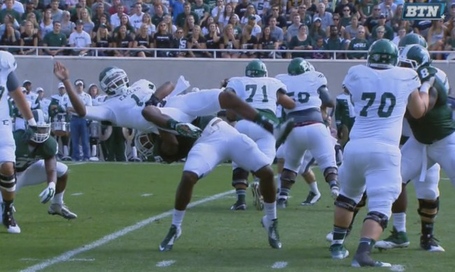 Who do you think taught them such moves?

I would be thrilled with any of these five candidates as our next head coach.

In order of likelihood though? Morris, Yurcich, Spavital, Frost, Narduzzi.

Narduzzi and Frost will be able to go wherever the hell they want if they choose to leave their current programs, which means a massive bidding war which means they won't be coming here. Spavital is about a year away from being able to say the same thing. He's young and is proving that Johnny Manziel isn't the only reason that offense worked. Morris was interviewed for the Texas Tech job before they handed it to Kliff Kingsbury. If you're willing to move to Lubbock, you're willing to move to Champaign.

@Champaign_Room If the basketball team were to build a statue of a former player outside SFC, who would it be? #AskTCR

This is a lot harder than the decision to build the Red Grange (or follow it up with a Dick Butkus) statue had to have been. Football makes it so much easier to just say "Hey! Look at this guy! He was the greatest!" We don't really have a guy like that in our basketball history. We have a lot of amazing players, but no MJ or Ewing. I'm going to have to go with Dee Brown. Third in school history in points, third in assists, second in steals, second in threes made, fourth in games played (two away from first), first in career wins. I was more of a Deron Williams guy, but Dee gets the statue.

@Champaign_Room Top five greatest Illlini of this century? From a talent & personality it has to be @deebrown11 at #1, right? #AskTCR

Wasn't sure if I was supposed to include football or not by I wanted to so I did and there is nothing you can do about it.

John Groce vs. a hurricane: Who wins? What if the hurricane is named Groce? #AskTCR

Just having a heart attack.

@Champaign_Room, BTN just came out with their Non-Con All-B1G Defense Team and there's no Illini. Who do you think deserves to be on there?

Sadly, no Illini really has the stats to be there yet. Dawuane Smoots three sacks are pretty nice, but the rest of his line really isn't enough. Taylor Barton's team-leading 43 tackles to go with that 77-yard pick six would be our best candidate currently and if he keeps that up, he has a great chance of getting placed on the second team at the end of the year. But right now, no one on the defense really deserves to be considered All-B1G yet.