After another close win, this modified version of the Statistical Brain Dump discusses 2014 Illinois Football as a whole: how have the Illini changed from last year, what are they doing well this year, and what does it all mean for the Big Ten schedule?

Last year, the Illini were nothing if not consistent. The offense was led by Nate Scheelhaase, one of the most experienced quarterbacks in college football, and performed at a steady level from week-to-week. There were bumps now and then (hello, Michigan State), but fans could generally count on the offense to perform at an adequate level at all times.

The defense was consistent too, but in a much different way. The Illini secondary was young and inexperienced (I have typed this exact phrase at least 30 times) and the defensive line struggled to hold its footing. Tim Banks came to Illinois having built an aggressive defense at Cincinnati, but none of his teachings seemed to have taken hold. The defense gave up yards aplenty, regardless of the week's opponent (except you, Purdue. Oh, you.)

But things are different in 2014, and it started with turnover. More specifically, it started with turnover at the most important position. Senior quarterbacks are typically steady, while newly anointed sophomores are...well, not steady. They make mistakes, and Wes Lunt has made plenty through four games. He's thrown into double coverage, triple coverage, quadruple coverage, and just about every type of coverage. He's thrown passes seven yards in front of the sticks on third-and-long. He's taken too long to read the defense and gotten sacked. He gave up two defensive touchdowns in the first half against Washington and finished the first quarter against Texas State two-of-six passing for three yards.

But he's made some ridiculous plays too. Lunt has thrown frozen ropes 40 yards down the field, hitting receivers perfectly in stride. He's shown patience and a calm demeanor in three fourth quarter comebacks (in the first four games!). Lunt is currently ninth in the country in total passing yards and tied for eighth in passing touchdowns. Illinois ranks 10th in the nation in offensive plays exceeding 20 yards. The highs have been high and the lows have been as low as it gets.

But so far, that's really the story of the team as a whole. Horrifyingly bad first halves followed by second halves ranging from solid to stellar. For a long time, people have been saying that football teams as a whole can take on the persona of their quarterback and their head coach. Whether or not you believe that, it's clear that this team can switch from awful to, frankly, very good at the drop of a hat, just like their quarterback.

For weeks, I've been repeating in these columns: when you boil everything down to a simple stat sheet, this team actually looks pretty good. Yards Per Play is the easiest and most effective catch-all statistic in football: through four games, Illinois is undoubtedly improved from last year's mark.

There's a bit of conflicting noise around this number. One may object that last year's non-conference schedule was more challenging because of Cincinnati's presence. While that team was tougher than Western Kentucky, Texas State, and Youngstown State, those three together are probably pretty equal with last year's non-Washington line-up: Cincinnati, Miami (OH), and Southern Illinois. None of those latter three teams had a unit as good as Western Kentucky and Texas State's offenses.

While the team looks pretty similar to last year's by the eye test, the improved statistical performance of the team suggests there may have been improvement here. In reading Illiniboard's weekly content, I've settled on one particular piece that consistently makes me think: the Back And Forth post between Robert and Steve Donohue. Steve seems to share a lot of my opinions, which pleases any reader. Most recently, in the Texas State rendition of the post, Steve laid out three ways to analyze the team's performance, one of which reminded me of an idea I've been trying to articulate for weeks:

(3) If you squint at the numbers just hard enough in the right way, a good team still shakes out. On a play-by-play basis, Illinois has been clearly better than three OK-ish teams and held their own on the road against a good team. And these are just game-wide averages; there have been stretches lasting three or so drives (offense and defense) in each of the non-Washington games where Illinois has dominated the way you’d expect a good team to do against inferior competition. If there is a way to harness that throughout entire games — not even every game, just two or three games from here on out — then this team could still clear six games, maybe easily.

This is the optimistic (but not too unrealistic) take on this team. If you stick to the stat sheets, this team looks like one that has actually played like a decent Big Ten team so far, with a couple of fixable downfalls: they struggle to consistently maintain and finish offensive drives, and they give up big plays (mostly by the pass) in key situations. That's counterintuitive for many, because fans are so used to saying "our run defense is terrible, that's the reason Illinois sucks". This year, that's not what the statistics say.

By just about every trustworthy metric we have, Illinois' run defense looks average so far this year. Briefly before we begin: there are 128 teams in Division I football, so 64th in the nation would be statistically average. It's not great, but it's average. It's a C, but when last year's defense was an F, most fans would probably take a C.

The main difference between this year's defense and last year's is a change in athleticism. The 2014 edition of the Fighting Illini defensive line is particularly better than the last. There is depth, and that depth is capable of making plays Illini fans haven't seen in a few years.

These are the "boom" plays for the defense. These are the plays fans never saw in 2013. There's statistical proof of this too: last year, the Illini ranked 94th in the country with 66 total tackles for loss. Through one-third of the 2014 season, the Illini already have 32 tackles for loss (sixth in the country!!!) and are averaging eight per game (20th in the country). When the Illini string together one or two of these big plays in a row, it's basically an automatic punt. They've done that a few times, most notably in the second halves against the worse teams on the schedule. When the newfound athletes make plays like this for a two or three drive stretch, the entire team really gets going. That's how Wes Lunt comes up with massive fourth quarters-- it's not merely an offensive effort. The defense has gotten stops as well.

Advanced statistics hold true to this as well. Illinois has the 42nd-ranked defense in Bill Connelly's S&P+ rankings, which are adjusted for the skill of the opponent. Going down to the raw numbers, Illinois ranks well in rushing situations and poorly when opponents are willing to go to the pass. On Standard Downs, which occur when a team stays on schedule (1st and 10, 2nd and 5, 3rd and 2, for examples), the Illini defense ranks 43rd. On Passing Downs, like 2nd and 8 or 3rd and 10, the Illini fall all the way to 89th in the nation. They're giving up big plays, mostly due to tackling errors and other issues. Sometimes, this can look comical.

you hate to see that happen http://t.co/DyBf6YncLh

Those same players who make big hits behind the line of scrimmage are consistently making big mistakes. Against Texas State, this was more obvious than ever. Throughout the first half, Texas State made their offensive game-plan quite clear: they constantly used slightly tricky plays like screens and the read option to abuse the mental weakness of the defense.

This Illini front seven has an aggressive mindset, and the Bobcats took advantage of that by running plays around their blitzes and their men bursting into the backfield. Texas State had success with this for the first few drives, but eventually the Illini figured it out and began shutting down those cheap, quick plays. That's important-- the sooner the inexperienced Illini can adjust, the more this defense will improve.

Unfortunately, big plays will continue to happen against Illinois. As shown above, Illinois is giving up as many big plays as anybody in the nation. This defense isn't going to suddenly morph into an elite unit and overcome their mental mistakes.

Likewise, the offense isn't going to perform well on most drives, like last year. This team is going to have three-and-outs. Bill Connelly's S&P ratings once again tell the story of a team that struggles with consistency, but can explode at any moment. The Illini are a below-average 80th in Success Rate, which determines how well a team maintains their drives and avoids third-and-long. On the flip side, the Illini rank 23rd in IsoPPP. That means, when the Illini have a successful play, they are frequently able to break it for a big gain. Once again, this makes sense. Just look at the first four drives against Texas State: 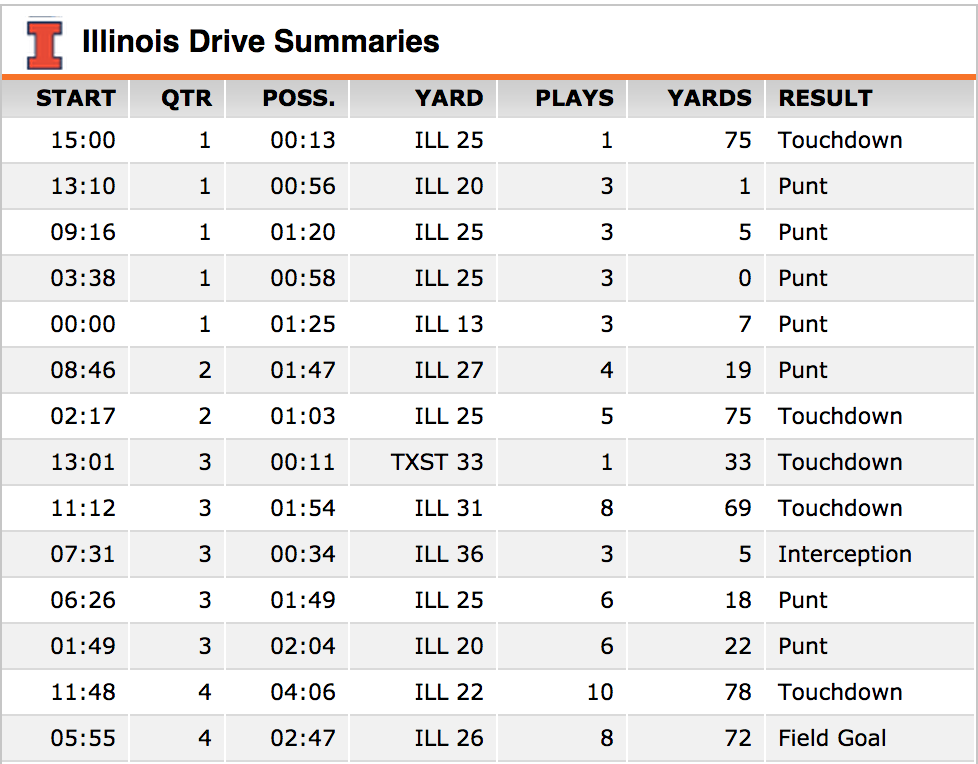 That reads just about perfectly in line with the advanced statistics. Either Illinois puts together a big drive or they sputter. This could either help them or kill them against the better teams on the schedule-- it all feels exceedingly random thus far this year.

So now fans have to figure out the proper expectations for the final two-thirds of the schedule. Beckman's squad has met the expectations of the first third, with three wins over below-average teams. There have been ridiculous ups and ridiculous downs, but the bottom line is that expectations were met. And now the Illini have five winnable games remaining on the schedule: home versus Minnesota, Penn State, Iowa, and Purdue, and on the road at Northwestern. They also have three automatic losses where the Illini are just hoping to compete: at Nebraska, at Wisconsin, and at Ohio State.

If this team plays up to their "boom" capabilities on both sides of the ball, they can win all five of the borderline match-ups. That won't happen, but it is possible at the very height of their potential. If the Illini prove to be closer to the "bust" performance level, fans may not see more than one win in the conference schedule. That's the excitement of this season-- whether Illini fans choose to believe it or not, there is a real team under the large quantity of points given up. There are players capable of becoming an average Big Ten team.

The "Boom or Bust" Illini have the athletes, and the question now is whether they can harness that talent well enough to compete for a bowl berth. The answer to that question, for better or worse, will determine if Tim Beckman is still the head coach in 2015.