In this post we'll explore the early success Illinois had against man coverage, why it stalled after the first few drives, and how Illinois should be attacking zones once that happens again.

Share All sharing options for: Inside the Playbook: Helping Wes Lunt Read Coverage

Let me introduce myself real quick. I created and run a blog, Breakdown Sports, and sometimes work as an SB Nation contributor. Breakdown Sports is a blog dedicated to X's and O's, schemes, and techniques, particularly those from the B1G teams. The goal is to look more in-depth into the game of football for the B1G conference than you will find almost anywhere else, from my game breakdowns to my play breakdowns.

If you are interested in keeping up with my blog and my thoughts (I live tweet about B1G games when I'm able), you can follow me on twitter @SpaceCoyoteBDS. I hope you enjoy this piece, please leave questions or comments and I'll make sure to check back. [Ed Silich: I read just about everything Space Coyote writes and it's incredibly useful and informative. I highly recommend checking out his site and following him on Twitter if you're interested in the X's and O's of football.]

Early in the first quarter, Illinois had success running crossing routes against Washington's man-to-man cover 1. They ran routes concepts like the drag and follow (drive and chase), mesh concept, and a Cadillac (levels) concept. These are concepts that are all-coverage beaters, but when Washington switched from a Cover one/Man Under to Cover two/four, Lunt struggled to read the underneath coverage quick enough.

Drag and Follow vs Man
Here's a first and ten play for Illinois early in the first quarter. This will be a standard two defender read, with the green square showing the QB's first read, and the red square showing the second based on his first read. Both are what you'd consider the "hook" defenders. They are the movement keys. 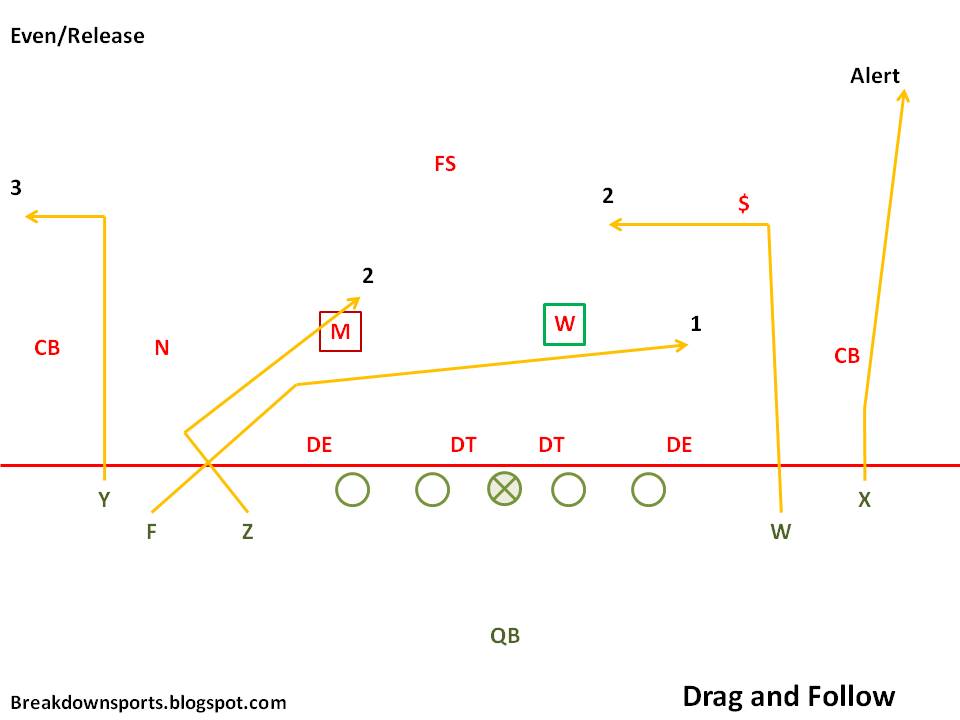 The first read is the WILL. If this defender comes crashing down, Lunt will work his eyes back to the MIKE. If the MIKE is sitting, Lunt throws over the top to the dig route in the window between the MIKE and WILL. 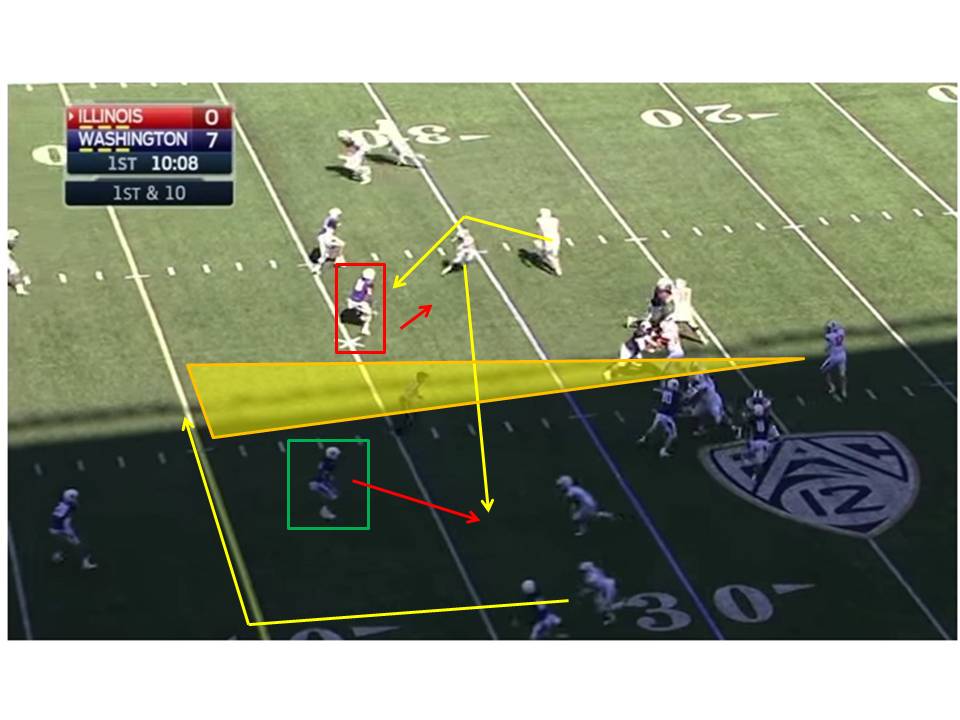 Instead, the defender continues to sink to the dig route depth, leaving the drag route open. If the drag is able to cross the MIKE and get clear, then the QB throws the drag. 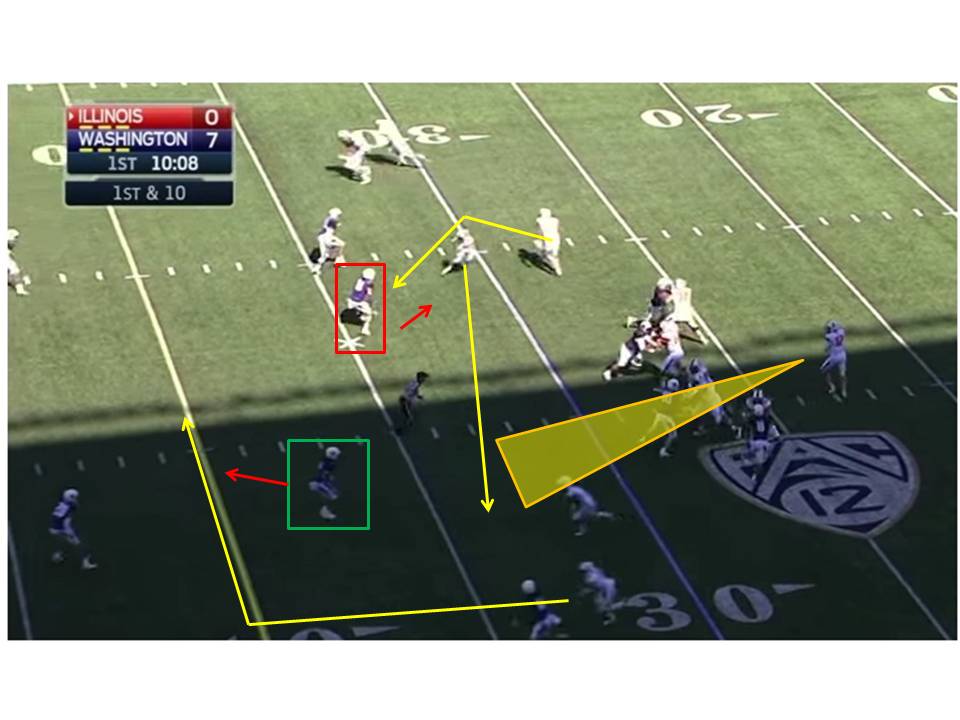 If the MIKE follows and maintains position, then the follow route comes open in the void left by the MIKE. 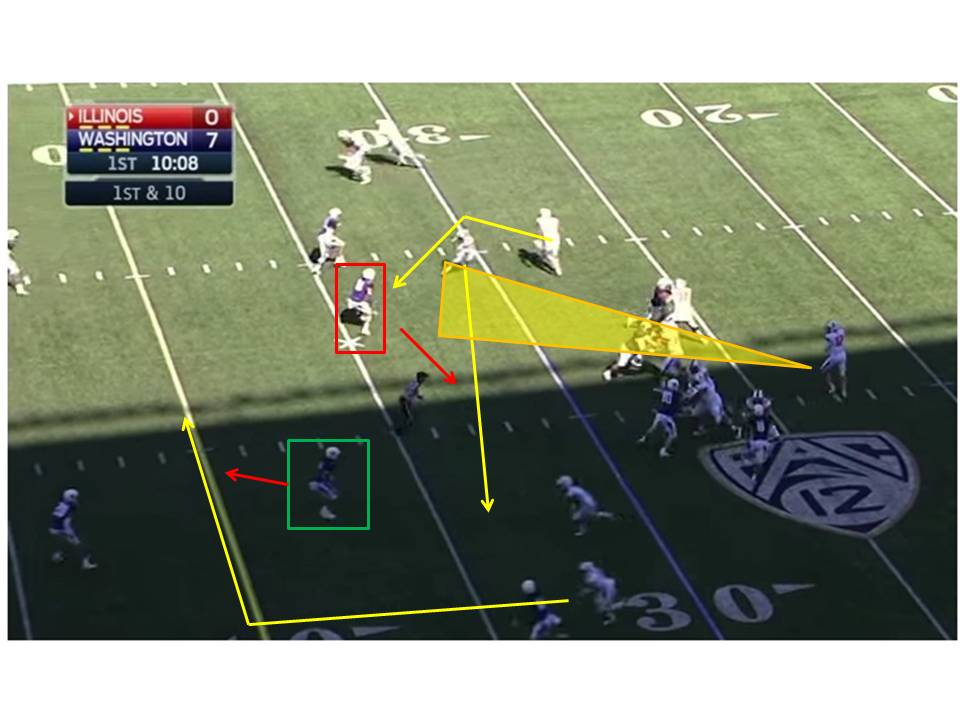 Here, the WILL sinks and the MIKE gets crossed by the drag receiver (Martize Barr, in this case).

Drag and Follow vs Cover 2/4
Here, Washington switches to a zone coverage (specifically, Cover 4). This causes Lunt some issues, as the read is not as easily defined by the movement keys. The MIKE in this case is the first read. He begins sinking and then breaks down to meet the drag route. So Lunt's eyes need to get back to the SAM. But he waits too long to define his first read and move on to the second read.

Here's when the read is to be defined: 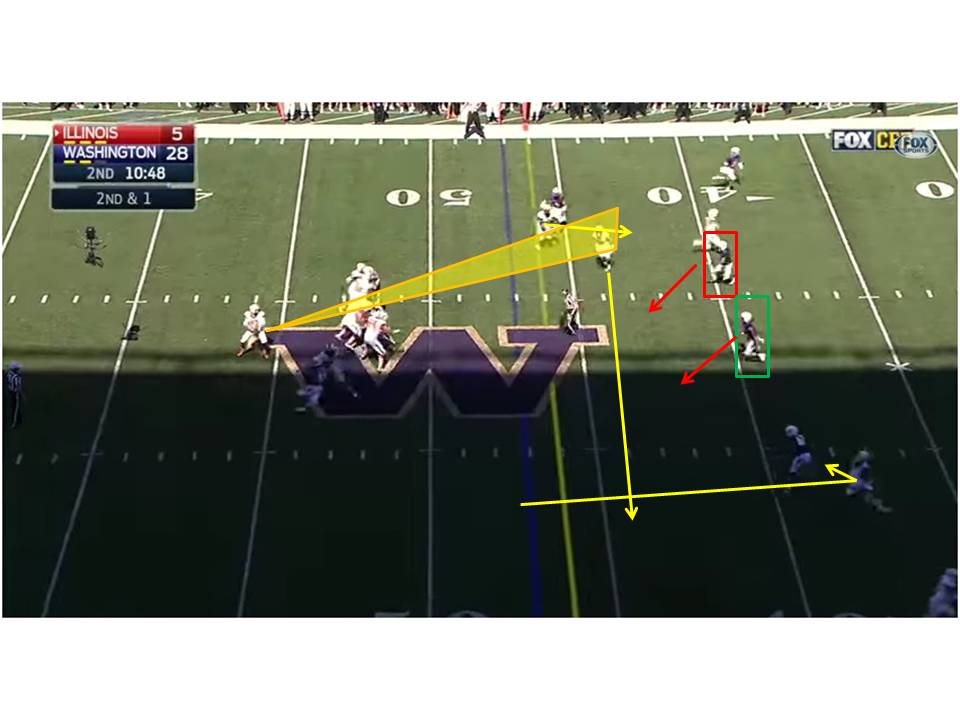 Instead, he continues to step forward in the pocket with his eyes on his first key. Michael Heitz, who struggled all day at RT in pass protection, loses his man and the DE can retrace back to the football and get the strip sack.

How To Make Life Easier for Lunt
So, first of all, Lunt needs pass protection. The example above wasn't the only time Heitz got whooped. In fact, several of the other concepts I got to diagram weren't allowed to develop before the pressure got in off the right side of the line. What that means is that the RT needs some help. You can give him help in several ways: line up a TE on his side, have a RB chip and help on the DE, or run play action. Play action forces the DE to remain engaged with the OL rather than getting vertical. Heitz's biggest issues were when the DE got vertical and was able to get Heitz off-balance.

The second thing to do is to provide quicker two-high coverage beaters to the outside. In this case, Illinois runs what is called a switch concept to the near side of the field. This acts as two verticals against a Cover 2, forcing the safety to pick to cover the post or cover the streak. Against Cover 4, the cross works to leverage both the safety and the CB to give the receivers body position on the defenders.

Likewise, there is what we call an "Alert". An "alert" is a receiver that has a good chance to break open based on the movement of a single key. In this case, the Cover 4 SS cheats up to protect the run. This alerts Lunt to look for the X-receiver to the top of the screen. The X-receiver runs a hesitate and go and gets over top of the CB and is wide open. 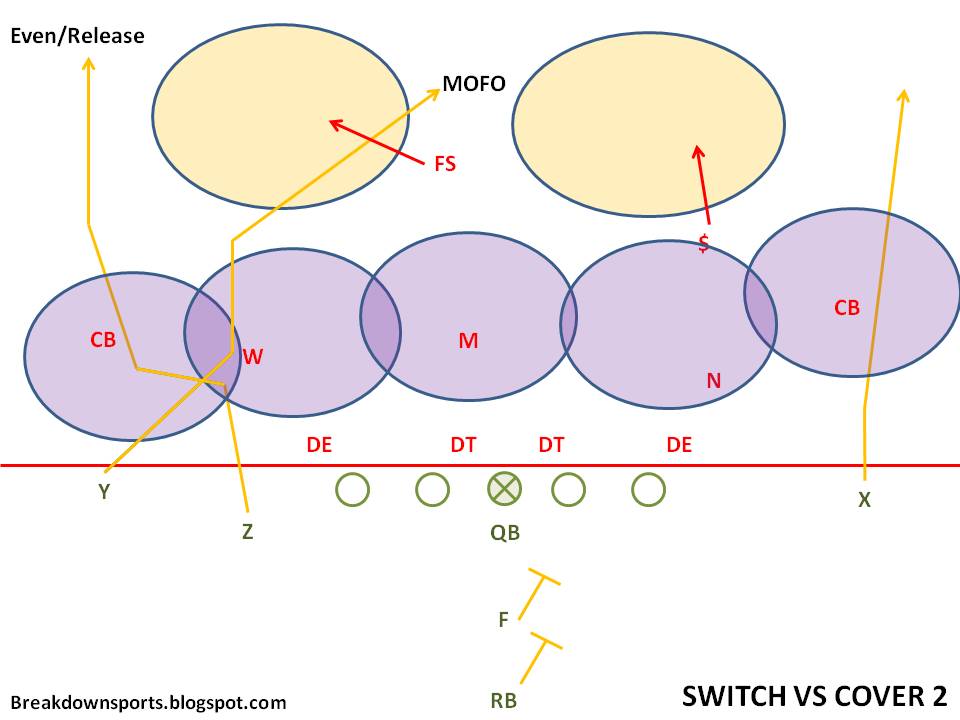 The key here is that even if Lunt doesn't go to the Alert receiver, he has helped protect himself with the PA, he has taken the underneath coverage out of the equation (both with the PA and the route concepts), and the switch concept has fairly easy read keys on the outside for him to read and make a throw. This is easier for him, it protects him, and it gets him away from having to read tight underneath zones.

Conclusions
Against man coverages, these crossing concepts provide Lunt with some easy reads and allow him to get the ball out of his hands pretty quickly. But when teams run zones, particularly one that can cover the underneath zones, Illinois needs to help Lunt by allowing him to get rid of the football without having to read the underneath zones.

Doing outside route concepts attached to PA is a good way to achieve this. The run game can also make it easier for Illinois to do half rolls and sprint outs to shorten the field and still attack the edges if they are worried about Lunt's arm strength to the far side. In these ways, they can mitigate some of the big issues that bogged down the Illinois offense after the first few drives.