Today we're taking an in-depth look at one of the most underrated student sections in the country: Illinois Volleyball's Spike Squad.

After a brief hiatus, our Student Section Q&A series has returned! If you haven't already, make sure to check out the first installment of our series which featured Football's Block I.

In this second installment, we'll be taking an in-depth look at one of the most underrated student sections in the country--Illinois Volleyball's Spike Squad.  Chris Ryba, Spike Squad's Chair, was kind enough to answer a few questions for us.

The Champaign Room: Unfortunately, many of our readers may not be familiar with Illinois Volleyball.  Can you give us some quick information about the program?

Chris Ryba, Spike Squad Chair: Illinois volleyball has been, and continues to be, one of the best volleyball programs in the Big Ten. In 2011, the team made it all the way to the National Championship match and just this past season the Illini advanced to the Sweet 16. Illinois volleyball have reached the Final Four on three separate occasions and (fun fact for everyone) were the first Big Ten team to make it that far during the 1987 season. Dating back to the first season of Illini volleyball, the program has produced 11 All-Americans, with the most recent being junior Jocelynn Birks this past season. The Illini are consistently ranked in the top 25 nationally (#11 to begin the 2014 season) and are a force to be reckoned with, especially at home in Huff Hall. With 3 seniors leading the charge and 12(!) combined juniors and sophomores, this appears to be the season in which coach Kevin Hambly and the Illini make another charge at their first ever national title! It's always good to have depth and experience, right?

In case you missed it, the 2014 Big Ten Volleyball Preseason Poll was released last week--click the link for more information on this year's team.

The Champaign Room: What's the environment like inside Huff Hall during a match?

Chris: I like to describe it in one word: electric. If you took a couple thousand fans in the front of a One Direction concert (those girls can get loud and screamy) and stuck them in tiny, acoustic-friendly Huff Hall; that's basically what the environment is like during every match. You can find the Spike Squad stomping on the bleachers, screaming, chanting, causing all kinds of ruckus in the southwest corner of Huff. You will start to lose your voice after a weekend of volleyball. We, and the other fans of Huff, LOVE to feed off of the energy of the team. If you go find any picture of the players during a match, I'm sure you'll find some sort of mouth-open, yelling, fist-pumping like snapshot of a player in the middle of celebrating. Huff erupts after every point and there is never really a lull in the action, unlike something you'd find at a basketball or football game with timeouts and TV timeouts galore.

Chris: "Stuff Huff" is the biggest promotion of the year for Spike Squad and it is always the first night match of the season. What makes this event so special is that it is normally the first match for a lot of incoming students and they can truly see what it is like to experience an Illini volleyball match. Along with the DIA, we throw a party outside Huff before the match with a DJ, food, rally towels, and some sort of crazy event (last year we did a paint war). We pack the section all the way to the rafters and we cram as many students as we can into those seats so we can make Huff the best home court advantage you will find anywhere in the country. We've got students sitting Spike Squad's normal section; we've got students sitting across the court in the opposing fan section behind their bench; and we've got students all the way up in the old wooden seats. We've got students everywhere. And when you've got that many students making that much noise for the Illini in such a tight knit space like Huff, it truly creates something special. 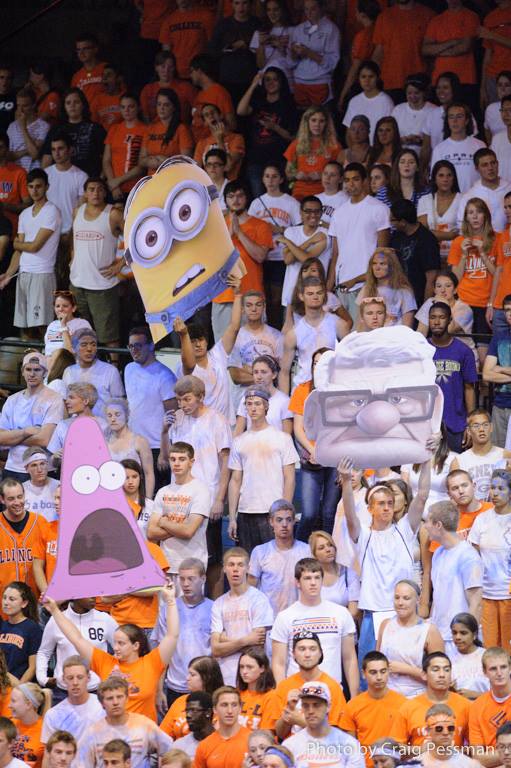 The Champaign Room: The folks at BTN have praised Spike Squad for their incredible support of the Volleyball team.  In your opinion, what has separated you from other student sections both in the Big Ten and around the country?

Chris: Mike Wolf (BTN analyst) sort of has a crush on us, no big deal or anything. The thing that separates us from other student sections across the nation is our family atmosphere and our customized cheering. There's a tradition that when the team wins a match at home, the Spike Squad joins the team on the court to sing the Alma Mater arm-in-arm. Not sure any other student section around the country, or at Illinois even, can claim that right. But the thing that really sets us apart is in the creativity with our cheers. We've got different cheers for blocks, for kills, for serves. Each individual player even has their own cheer! It takes a lot of time to carve out the perfect cheer, but it adds just a touch of splash to an already exciting atmosphere. However, we do have some competition over at Purdue for best student section with the Boiler Block Party. But it's not even close: we're the best. I mean, who else travels around the country supporting the team? Not the Block Party, that's who.

The Champaign Room: Like Block I and Orange Krush, Spike Squad has been known to travel the country in support of Illinois.  Can you give a recap of where the group went last season?

Chris: Last season may have been a record for most miles traveled by Spike Squad (or any student section for that matter) ever. The official Spike Squad road trip, which is an all-expense paid trip similar to Block I and Orange Krush, was to Wisconsin this past season. There were about 50 Spike Squad members who made the trek up to Madison for a day full of fun and an Illini win! It's always awesome to see the look on the players' faces when you reveal into the Illini orange. Also, there were some very unofficial road trips taken by some adventurous Spike Squad members (myself included) to Michigan/Michigan State, Indiana/Purdue, Ohio State/Penn State, Iowa, and Northwestern. Some of us even made the trek out to North Carolina for the UNC and Duke matches! We logged a lot of miles, but the volleyball team and their parents always treat us like family and take good care of you. If there are any Spike Squad members that read this and would love to join some of us on these crazy fun road trips, don't hesitate to contact me! The more the merrier!

The Champaign Room: How does a student go about joining Spike Squad? Does membership include a t-shirt with that beautiful new logo on it?

Chris: Any student can join the Spike Squad! All a student needs to do is join Illini Pride and show up to the volleyball matches, but make sure to get your card scanned! After 3 matches, you'll get a shirt with our sweet new logo on it!

A new season calls for a new look! Welcome to the newly redesigned 2014 #SpikeSquad! #throwback pic.twitter.com/VY6GlDOqGW

The Champaign Room: Do you have any other unique information that you'd like our readers to know?

Chris: Head Coach Kevin Hambly is absolutely one of the coolest coaches you'll ever find in college sports. He loves us. So every year, we have a Hambly Night where people dress up as Hambly to honor him. He hates it, but we love it! Plus, we've got a little surprise for him this year..

Spike Squad is fantastic. Volleyball may not sound like the most appealing thing out there, but believe me when I say it's one of the more exciting sports to watch. Students, do yourselves a favor--try and make it to at least one match this Fall.  Whether it's "Stuff Huff", the annual State Farm Center match, or just an ordinary match at Huff Hall, Spike Squad is a great experience and you won't regret the decision.