For the first time in the history of #AskTCR, I have a co-pilot. Due to enough of you asking for it, Rebecca happily stepped up to answer any and all questions directed to her (and one that confusedly was for good measure). And there are also plenty of normal, non-talking to my girlfriend questions as well.

@Champaign_Room 1 what do you think are the chances we land J Brunson? 2 any idea where I can buy a pair of the new hoops shorts? #AskTCR

I think we have much better odds of landing Jawun Evans than Jalen Brunson. Brunson's recruiting definitely opened back up, I just don't see him in the orange and blue.

As for the shorts, I have to assume the school site or any of the bookstores will have them soon enough if not already.

@Champaign_Room Rebecca, don’t you think you can do better? #AskTCR

Hurtful, Tom. I do have feelings.

Rebecca's answer: "Hi Tom. Excellent philosophical question. It makes me feel like I’m on Miss America or something: "Ohh, that's a tough one! I'd have to say April 25th. Because it's not too hot, not too cold, all you need is a light jacket!" ~big clueless smile~ 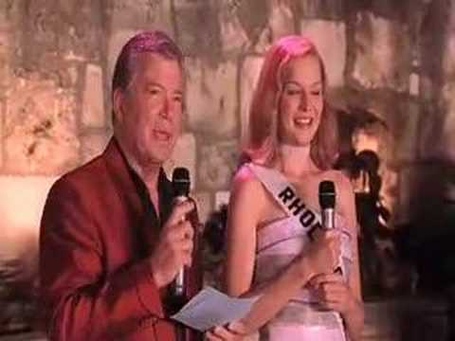 My answer is that I can always do better. Until the day I die, I will be trying to do my best. The sad part is that it will never, ever, ever be enough...

What can I say? Perfection is a cruel mistress."

Now while this question wasn't necessarily directed at Rebecca, it was in response to the tweet about her answering questions. So I gave it over to her to answer.

Rebecca's answer: "Hi Ty. I'm not sure if you meant this question to be addressed to me, but guess what? You're in luck! Since it was (perhaps) inadvertently added on to the tweet about my willingness to answer questions, you get to benefit from my sports-related knowledge. Said knowledge can be summed up in three points:

1) Most of the major sports in the US of A seem to revolve around balls. Balls everywhere.*

2) There is a definite gradient of attractiveness between sports players of different types. This is something I feel fairly confident stating thanks to the invention of a little fabric called spandex. Rugby > Soccer > Baseball > Football.

3) People seem to like watching sports almost more than playing them. I assume this is because while watching you can drink beer & while playing you cannot. **

As you can see, you are in the hands of an expert. It seems to me that pragmatically you should attend the Northwestern game because it is significantly less of a trip (thank you Google Maps for the Illinois geography primer). However, re-visiting your alma mater may add something special to the game if we’re looking at things from an emotional standpoint. If you’re anything like me you’ll decide what you want no matter what I say, but here’s my advice: Go to both!!! Have your cake and eat it too! And if anyone tells you that you can’t both have cake AND consume it, tell them they are filthy communists. This is America, for whatever-deity-you-prefer’s sake!

*Disclaimer: I watch UFC fairly regularly. I used to be an equestrian & a snow skier, so I realize there are other sports. In fact, I love watching the X-games and parts of the Olympics. This is an exaggeration for comedy’s sake.

**Disclaimer #2: Beer drinking is definitely something I can get behind and fully endorse, so sports fans, don't take that statement the wrong way."

@Champaign_Room #askTCR what uniform combo are we wearing against Youngstown State?

I'm personally hoping for the all orange, as I love the hell out of orange and the fact that we're one of the few schools in FBS that use it as a primary color, but I think they'll probably go with the blue since Youngstown State's colors are red and black. Still gonna hold out hope for the orange though.

See the above question.

@Champaign_Room Rebecca, who is your favorite blog co-editor of Mark’s? By the way you look stunning today. #AskTCR

Rebecca's answer: "Hi Matt! You are, of course, my favorite co-editor of Mark's. If you had to ask who my favorite editor of the site is, I would have to answer Mark. It's in the girlfriend contract under article 24, paragraph 3. Editor's note: It really is listed there. I haven't actually met you, but it's clear you are a man who understand the judicious application of flattery. Though I must say, Aaron's unicorn avatar is pretty frickin' sweet. I have a unicorn tattoo so we could probably bond, but he missed his chance to compliment me via the internet (I'm assuming it would be for my badass unicorn tattoo) before I had to answer this."

Are you more surprised that Rex Grossman is in the NFL or that Kyle Orton isn't?


I'm looking for a new book to read (preferably a series). Any suggestions?

I don't think Orton will be out of the NFL for very long. By the end of the pre-season, he'll likely be snatched up for extra depth by some team who loses a QB to injury. It is kind of weird that Grossman keeps being signed though, seeing as he hasn't actually played in a game since 2011. Grossman will be the type of QB that gets more chances than Orton, because Orton is viewed solely as a game manager and Sexy Rexy has that cannon arm. Is that fair? No. But that's sports.

As for books, I have to ask what kind of books you like reading? I assume people have already suggested the A Song of Ice and Fire series, which is a pretty safe bet. They can get a bit sloggish at times (looking at you, A Feast for Crows), but they're pretty enjoyable and you can get through their thousand page entries surprisingly quickly. If you don't mind going down the graphic novel route, go for the Sandman by Neil Gaiman. It's not superheroes at all, if that's what you're worried about. It's just something different and very enjoyable. I try to reread the ten books each summer.

#AskTCR What do you think of Tesla? Seems like they finally made a cool electric car and seriously considering when the Model 3 comes out.

I'm all for anything that decreases reliance on fossil fuels, works efficiently, and doesn't make you look like an asshole (sorry Smart car, you're hideous). I say go for it. I hoped to eventually own a Prius once I'm out in the real world and have a significant chunk of my debt paid off. That may be getting replaced by a Tesla.

@Champaign_Room MFK? Kams, Station (not Red Lion, old Station), and CO's. Also, best building on campus to have the keys to? #AskTCR

I understand how I could kill a building. I'm far more concerned about how I marry one. I am terrified about how I'm supposed to have sex with one. My only experience with Station was at Fall Barscramble '09, so I guess that gets the F. I'd have to kill Kam's because of that damn smell. Which leaves me marrying CO's? Man, there was no win in this scenario.

Best building to have keys to is the Animal Science Lab, by far. There are animals in the basement. A literal army of beagles you could play with as much as you want. What building can top that? Not any of those nerdy engineering ones!

@Champaign_Room #asktcr Jake Angora is the earliest walk-on ever destriped, please elaborate on what it means: outland this year or next?

It's pretty impressive, especially for an offensive lineman. As for what it actually means, I think it gives him a good shot at upgrading from walk-on to scholarship player. And then top five draft pick after leading the Illini to a Rose Bowl victory. Naturally.

We have a new Endzone! Thoughts on the new look and what would you like to see the logo be at midfield? #AskTCR @Champaign_Room

I like it. We rebranded and that's not something you half-ass. Bright colored end zones are always the best and the new Illinois font has grown considerably on me. I want the midfield logo to be the I Shield (does this have an official name yet?). Consistency is important, so we need that baby getting as much exposure as humanly possible. If not that, I'm fine with the state outline.

#AskTCR What big ten upset can illinois pull off?

As of right now, we're likely to be the underdogs in every conference game other than against Purdue. Things could easily shift during the season to put us ahead of certain teams, so I'm just going to rank the conference games from easiest to hardest.

Purdue should be a win. Minnesota and Northwestern should be toss-ups. Penn State would be the most realistic actual upset.

@Champaign_Room How far into the course would you make it on American Ninja Warrior? #AskTCR

Not as far as I would have six years ago. I'd still do fine at the running and jumping parts, but having had three wrist surgeries on my dominant hand and a labrum in that same shoulder repaired tell me I would not do particularly well at all the pulling myself up heights and solely using my upper body strength.

@Champaign_Room sports related question: the Illini mimic the 2011 regular season and start 6-0 but finish 6-6. Success or no? #AskTCR

I think it would still qualify as a success. It would be disappointing to watch that kind of collapse again, but it wouldn't have that same soul-crushing impact as the 2011 season did. The 2010 team won their bowl game. Against an RG III led Baylor squad. We hadn't won a bowl game since 1999. No player on the team was in high school. Some were still in grade school. That's a terribly long drought. To go from that promise to complete and utter collapse? Horrible.

But looking at the 2014 schedule, I'd be okay with a 6-0 start followed by an 0-6 finish. That gives the team road victories over both Washington and Nebraska. No loss on the back half of the schedule is to a team we're supposed to be demonstrably better than. I hate ending the season with a loss to Northwestern, but neither team is markedly better than the other right now. That back half 0-6 would include losses to Iowa, Penn State, Wisconsin, and Ohio State. That's a fairly normal season right there. Plus it would involve a bowl game and that's pretty much the dream right now.