Much like fast food, Big Ten football is completely terrible for your health.

Share All sharing options for: The Big Ten As Fast Food Restaurants

I do not attempt to hide how much I enjoy Anthony Borkowski's #AskTCR questions. We get a lot of great questions, but he routinely asks ones that either make me start laughing or super excited to write about them the minute I see the tweet. Anthony did not disappoint this week.

@Champaign_Room The B1G schools are now fast food restaurants. Which school is what restaurant and why? #AskTCR

This was simply too good to bury in the middle of this week's #AskTCR mailbag, so as promised, it's getting an entire post to itself. Is this unfair to other questions? Maybe, I don't really know or pretend to understand the concept of fairness. But I know that it's late June and there is nothing to write about currently. Go look at Sippin' On Purple. They haven't had a new article since May! But I'm getting off track.

Fast food is terrible for you. It will kill you. It will make you sedentary and sick. But dammit, it's so delicious. Fast food IS Big Ten football. It's horrible for you and you know you should do better but there you are, constantly going back to the well. I spent the last day or so jotting down comparisons in a legal pad so I would remember my ideas come Friday morning. I think my girlfriend is slowly realizing she's with a crazy person when she sees me scramble away from whatever I'm doing to write down five words comparing a university to a sandwich joint.

Let's be honest with ourselves here, Taco Bell is generally pretty terrible food. The thought process behind their "meals" is more or less a fever dream, the ingredients are questionable at best, and the execution is designed to disappoint. It really should be better than it is, but rarely manages to do so. But every now and then, it somehow becomes amazing for a brief period of time. That time is when you're drunk. Both are also known to give diarrhea.

Go ask someone to start listing off fast food places. Unless they're a crazy person or have terrible taste in food, there is no way Arby's was among the first five they names. Now do the same exercise but swap in Big Ten football teams for fast food places. How long did it take the person to say the Hoosiers? Did they ever actually manage to?

Look, Arby's/Indiana is gross and awful. They do one thing pretty well (curly fries/offense), but everything else is miserable and will make you hate yourself and everyone around you. And you paid for that privilege! Both also feel the constant need to rebrand, but somehow manage to screw it up every damn time (those stupid "Good Mood Food" ads/ridiculous striped helmets).

Subway is supposed to be better than its fast food brethren. It's sandwiches! Everyone loves sandwiches! And hey, there are vegetables and they are "fresh". And for a while there, Subway was making all sorts of headway and looked to be becoming one of the top dogs.

But then they abandoned $5 foot longs and people started to question why they were being asked to pay a premium for something that wasn't really all that great to begin with. Did I just compare Kirk Ferentz to a mediocre meatball sandwich? Yes, yes I did.

A sandwich from Subway is definitely better than eating at Arby's or Taco Bell. But let's stop pretending it's really anything much more than that. It isn't. It's just dressed up like it should be.

Okay, they can't all be winners but I'm still getting used to the fact that I'm suddenly supposed to know things about friggin' Maryland and Rutgers. Maryland was basically the Illinois of the ACC, which actually helps this comparison because somehow combination Taco Bell/Long John Silver's exist. It's like we're made for each other. And by each other, I mean giving people dysentery.

Both are represented by giant yellow (golden/maize) Ms and if you squint, the winged helmets kind of look like they have golden arches on them. McDonald's is one of the biggest fast food chains in the country. Michigan has the largest stadium in the country. But those are just the superficial trappings.

Both used to be well-beloved and incredibly popular and successful institutions, utterly dominating everything around them with their legacy and muscle. But some key changes (rising obesity rates, Fast Food Nation and Super Size Me/the rise of the SEC, hiring Rich Rod) led to a downshift in success and a tarnished image. Quick and decisive changes have been implemented to save the brand (redesigned stores, attempts to be more healthy/hiring Brady Hoke), but it may be too early to tell if they can actually change things. 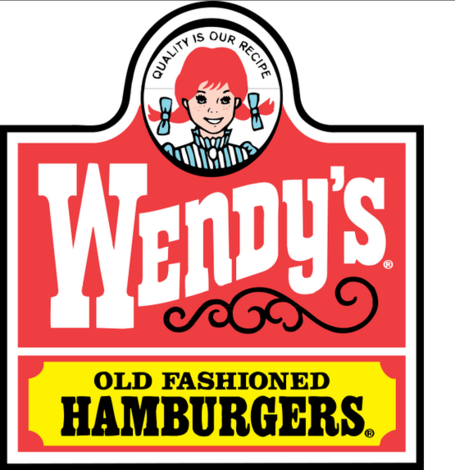 Forever the little brother (or I guess sister in Wendy's case). While not really any worse than the big brother (McDonald's/Michigan), and actually having been better lately, you still just don't get the same love and respect because you're not the original. I guess that's what you get for coming to the game a bit late. Also, there's something just a little bit off about you (square patties/team name that has nothing to do with the state or anything really).

You're not really what anyone thinks of at first because you're not really standard fast food. You're not really traditional (hamburgers/have a sustained history of not being terrible). You're basically Taco Bell/Illinois, but without being the butt of the same jokes. Preferred by people who speak with strange accents (Southerners/Minnesotans), you're viewed as better than you once were (grilled as an option/no longer employing Tim Brewster or Jim Wacker) but you're only a misstep away (Double Downs/Jerry Kill's health issues) from slipping right back into the gutter. Also, the Famous Bowl is the closest we'll ever get to being able to purchase hot dish through a drive thru.

Remember a decade ago or so when Sonic ads were always on TV but the nearest Sonic was somehow states away? And you'd sit there thinking "Man, that sure looks better than just going to McDonald's or Burger King again. Sure would be nice if we had a Sonic around here."

Flash-forward to now. The institution from Big 12 land (Sonic was founded in Oklahoma) has expanded and moved all over Big Ten country but has somewhat disappointed. Is it good? Yeah, it's not bad and definitely better than a good amount of options, but it's not as good as it looked when it was unobtainable and just beyond your reach.

The entry I expect to catch the most flak over, but I honestly don't care, as I think the comparison is apt as the dickens. Portillo's is good. No one can really deny that. But holy shit does it have an inflated sense of self-worth. It's expensive as hell, the drive thru line (application list) is absurdly long, and often seems to forget what it really is (a hot dog joint/a program with two double digit win seasons in its entire history). Both are also suburban institutions that pretend to be from Chicago. People from outside the area might be fooled, but everyone from Chicagoland knows that Villa Park and Evanston aren't the city.

Congrats! You're the best amongst your peers. When compared to other fast food burger joints/Midwestern football squads, you clearly stand head and shoulders above the rest.

But when compared to non-chain restaurants (SEC teams), you tend to pale in comparison. It's not that you aren't great. You are. You're just not really on their tier. And that's okay. You're still pretty damn good.

You've never quite fit in with the rest of the crew regionally (mostly west of the River/in freaking Pennsylvania). A strong history of competing with the big boys and providing quality products that became at least temporarily waylaid by a controversy involving children (E. coli outbreak/Sandusky). Currently rebuilding and attempting to reestablish as a true power (attempting nationwide expansion/hiring James Franklin).

Unless you live in or near Joliet, you likely have absolutely no idea what the hell Rax is and you are better off for it. Rax is essentially a second-rate Arby's, which really explains everything you would ever need to know about the company. They used to be far more important in the Midwest, but now only exist in very tiny pockets across the region. This was literally the first comparison I thought of out of the 14 and it is easily the most true.

Yup. Despite a brief resurgence in popularity brought on by questionable means (Harold and Kumar films/Greg Schiano), you're one of the least respectable options available. You'll do in a pinch and every now and then when you aren't quite thinking straight (are drunk/are drunk on conference expansion), you'll make the mistake of reaching for it. You'll rapidly come to regret it though (incredible gastric distress/one of the worst run athletic departments in the nation).

The obvious answer is usually obvious for a reason. Created out of essentially nothing in the middle of Wisconsin in the mid-80s, somehow grew into a regional powerhouse through the vision of one man (George Culver/Barry Alvarez). Primarily based on making things gigantic and fat (Butterburgers and custard/immovable offensive linemen). A good enough formula that tends to overreach and not quite make that final big step (too pricey/three Rose Bowl losses in a row).