The first thing you may notice while scrolling through this week's mailbag is that it feels as though there are fewer questions. That's not because fewer were asked, it's because one question was so damned overwhelming, yet fantastic, that I had to dedicate more time to it. Honestly, it may be my favorite question ever and I have enjoyed a great many of your questions. Just fantastic output all around this week, you guys. Take a bow.

@Champaign_Room Who's the real competition in Jalen Brunson's final 8? Seems like there are 3-4 to worry about more than others. #AskTCR

As we learned yesterday, it's really not even much of a final three or four. It's more of a final two and we aren't one of those two. When Groce initially abandoned pursuit of Jalen Brunson, we were more or less eliminated from the race. Brunson was being polite to include Illinois in his final eight, but it's kind of like when a star Chicago recruit includes DePaul: you know it's not happening. He's going to Michigan State. Second place would be Michigan. We're maybe the third choice. Maybe.

@Champaign_Room First game of the Gavitt series? DePaul in Chicago would be cool but I think Marquette in Champaign needs to happen #AskTCR

The Golden Eagles though? That would be a fun little regional non-conference rivalry to build up that would get more eyes on the program and could help with recruiting in Wisconsin. Other choices that would be kind of fun would be Butler and Creighton. Keep it regional yet still in the major cities.

Can we have the 2018 Big Ten Tournament in Vegas?

I still think it's incredibly dumb that the tournament is moving to D.C. in 2017. And unless they literally rotate to a major city in each team's state every year or D.C. is just a one shot (which it of course won't be), it remains a stupid plan. So yeah, fuck it. Let's go full bore and head out to the desert. Nothing says Big Ten basketball like bat country.

With the Cubs and Sox kicking off another Crosstown series this week, who do most Illini fans favor? #AskTCR

The Cardinals. The majority of Illini fans south of I-80 lean more towards St. Louis than Chicago. But to actually answer your question, it's the Cubs. The White Sox have done a really good job firmly establishing themselves in the southwest suburbs and in the actual city, but so many north burb kids are in Chambana and their hats are blue, not black. The poor bastards.

@Champaign_Room If you had to pick the football team to pull off an upset this fall, what would it be? #ASKTCR

If the choice is which team would I like to upset the most, that has to be Ohio State. Prime time game in Columbus in November? Yeah, give me that all day.

But as for the most realistic? I'm going to have to go with the home game against Iowa. Right now, we're definitely the underdog in that match-up, though I'm not entirely sure we will be come that time of season. Obviously I'm not including the Northwestern game because I don't think we'll be the underdog in it.

EPL question:
Do you feel bad for Liverpool or is it sort of a "don't let up 3 goals in 9 minutes and this shit wouldn't happen to you" kind of thing? Mostly I feel bad for Gerrard.

Illinois Question:
Groce seems to be everywhere, recruiting everybody. If he tells you that you are a priority and then is 3 states away the next day telling someone else the same thing do you believe him?

I can tell you who I definitely don't feel bad for, and that's Luis Suarez. Screw that guy. But I also don't feel bad for Liverpool. If you need to win against a midtable team like Crystal Palace, you don't take your foot off the gas with 10 minutes left. Playing to not lose is never a good strategy and that's pretty much what they chose to do at that point.

As a high school recruit, I'm skeptical about any coach telling me that I'm a priority in general. I know their livelihood is directly tied in to bringing great players to their school. So while I wouldn't believe it, I wouldn't be bothered by it. It's all in the game.

@Champaign_Room if you had to guess one player on the current illini basketball roster to go top ten in a future draft who would go? #asktcr

Unless Nnanna Egwu has a massive breakout year, it almost feels like it has to be Leron Black by default. I don't think he will, but he has the best pedigree for it and the most time to develop into a monster. That seems like a solid formula to sneak into the top ten.

@Champaign_Room We're looking to carpool with someone to the 2017 #B1G Tournament. Any suggestions on who to go with? #AskTCR

I hear Jim Delaney's limousine is lovely. Hit him up.

Should I study for finals or drink? #AskTCR

Why not both? I remember spending reading day of '09 very, very hungover. I woke up and decided I'd walk over to Grainger to study physics. As I was leaving, the girls in the house next door were drinking from a keg and demanding that anyone who walked by do a keg stand and then drink with them all day. I politely declined and told them I'd do a keg stand on my way home from the library.

I spent 30 minutes in a disgustingly hot and strangely not air-conditioned library before accepting that I just wasn't going to do well on that physics final and started walking home. The girls noticed me at the end of the block and what kind of man would I be if I didn't keep my word? The shitty kind, that's what kind. 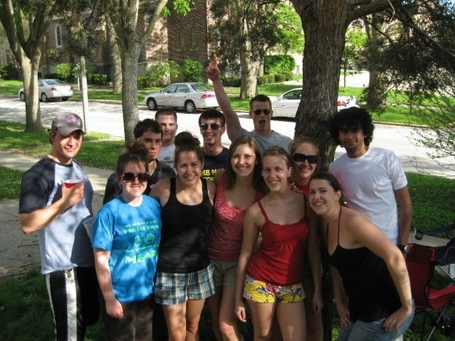 How did I do on that final? Well, maybe you should study instead.

@Champaign_Room #asktcr Whats the worse idea: Big 10 Tourneys in DC or the NFL draft over 4 days?

They're both tremendously stupid ideas, but the tournament in D.C. is stupider. I understand the logic behind both, but the NFL probably does manage to get more money/awareness by stretching out what should only take one day into the better part of a week. I don't see this being beneficial for the B1G.

@Champaign_Room NFL Draft #illini edition. Fill all 32 spots using only Illinois Fb players. Can be from any era. Whats the mock? #askTCR

And here it is. The Goliath of questions itself. I mean, look at it. It's beautiful. I actually woke up early today so that I would have enough time to answer this well and still have the post up by noon.

So I decided to go about this a certain way. This all Illini first round draft will take the order of tomorrow night's NFL draft and to make things more interesting, players will be drafted as though they would be playing for those very teams. Holy shit, this is hard. Even with the knowledge of what they go on to do in their NFL careers, this is insanely hard.

That was difficult. It was hard not slotting Simeon Rice to the Texans, since he'd be the Jadeveon Clowney of this draft, but Houston wants that tall rocket armed QB and there goes Jeff George. Rice would be the ultimate pain in the ass on Jacksonville's defense. Cleveland and Minnesota's defenses would be anchored by Hall of Famers for the next decade plus.

Really, the only thing I could see people griping about is Red Grange sliding all the way down to the 20th pick, but my reasoning behind that is twofold. First, halfbacks are not valued nearly as highly as they once were. They don't go high in the first round any more. Second, out of all the players listed, Grange might suffer the most from how much the game has changed. He was a god when he played, but linebackers weren't the demonic entities they are now.

No matter what, that was a pretty fun exercise in wishcasting, so thank you.