The former Illini greats talked to us about Illinois' new look

The reaction to Illinois' new logos and new uniforms has been, for the most part, exceptionally positive. People like the shield, they like the new helmets, they like what's going on with the basketball unis. These are people like you and me, and we have little authority outside of our ticket stubs and passionate hot takes.

The most important group to appease is the recruiting base, which decides the future talent level at Illinois. The second most important group is former Illini. That's the source I went to Thursday when I interviewed Rose Bowl quarterback, Juice Williams; two-time Big Ten hoops champion, Robert Archibald; and Flyin' Illini star, Stephen Bardo. They gave some insight into that first group as well. 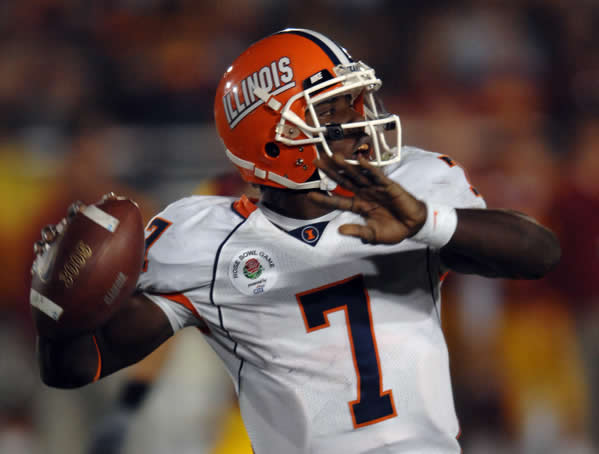 What is your general impression of the new football uniforms?

I like them a lot. The thing that pops out to me is how the old tradition is blended into this more modern, innovative look, and I thought that was a good idea by Nike. You bring in Red Grange and Dick Butkus and incorporate with some of the more recent times. I thought that was a pretty neat idea.

You were a former recruit yourself, so you know the scene quite a bit. Do you think recruits will take notice of this new look?

Absolutely. I remember the look being a big selling point. A lot of times in recruiting, the visual aids are huge. The uniforms can get you excited, and get you talking about Illinois. Everyone wants to be a part of a new, trendy thing, so it will be huge from a recruiting stand point.

Do you like these jerseys more than the jerseys you wore?

I don't know. About the same. I like this. It's a new idea, it's a new concept. The uniforms that we previously had were pretty cool too. I like the different combinations that we had, and the different ways that we could mix things up, with the colors. But these new ones are pretty awesome, and I think we'll be able to make an impact with these as well.

What is your favorite of the new uniforms? 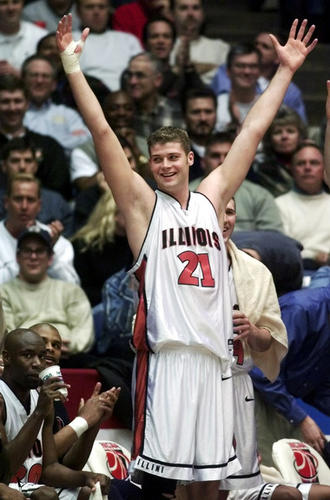 What are your thoughts on the new basketball jerseys?

I thought it was cool. I guess the biggest thing is that it certainly wasn't a step back--the Syracuse ones didn't look quite as good. At the end of the day, it's just jerseys. It's good on the recruiting front and for some other stuff, that's good. But I guess I don't have overly strong feelings.

That's the thing we keep hearing, that this new look will help recruiting. Do you have any insight into that, being a former recruit yourself? Do they pay attention to jerseys?

Yeah, they do. You can look at Oregon. They get a big boost from that kind of stuff. You have to realize that you're dealing with kids age 14 to 18, so it's a bigger deal to them. You're talking about the state school and everything else, so it's certainly going to mean something to kids if they're aspiring to put that on. In that regards, yes, it's pretty important.

I don't think they're drastically different. Not better or worse. They were good before, they're still good now. I liked them before, I still like them now. 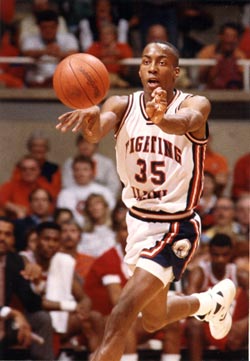 First off, how do you feel about the new basketball uniforms?

I like them. I think the font on the front of the jersey is cool. I know this is mostly for the potential student-athletes they are hoping to attract, so I think they'll like them.

Nike said that their goal with this redesign was to create a brand that honors Illinois' history, while also. Do you think they succeeded?

That's just stuff Nike has to say to justify making changes. No fan base likes change, so they are sensitive to that.

We've heard a lot about how this new look will help on the recruiting trail. As a former recruit yourself, will recruits take notice of these new uniforms? Do you think they will help Coach Groce's recruiting efforts?

The only thing that gets top recruits to sign is winning and the ability to play at the next level. That's it. The look of the jerseys are more important to this generation of players, but the same programs continue to win whether they have a redesign or not.

Most people, myself included, consider the 1989 jerseys to be the most iconic Illinois jersey in the schools history. Do you think these new jerseys compare to the uniforms you wore? Do you like these new uniforms better?

No. I don't think they compare because they can't use the Chief. I still get stopped regularly from people that want me to "hook them up" with the shorts we wore based mostly on their appreciation for the Chief on them.

The Big Ten has been thinned out with graduations and players jumping to the NBA. How does Illinois fare in conference next year?

I think they've got a chance to do really well. From what I'm hearing, they're motivated by the end of last season. You got a bunch of guys returning. I think it will be a little different, since it's the first year for coach Groce where the expectations will be a little bit higher. Obviously the first year was a transition, last year they had a lot of young guys. Now this year, they're expected to be competitive. It'll create a different atmosphere. Having seen some of the pressures and expectations you deal with at Illinois, that's going to be up. The bar will be set higher. Hopefully, they handle that well.