Share All sharing options for: Illinois to Play Ohio State in Primetime Slot, Memories Flood Back

The Big Ten announced their primetime football schedule on Tuesday, and the Fighting Illini made the list. They'll play the Ohio State Buckeyes in Columbus on November 1, 7:00 p.m. CT. The game will be televised on either ABC, ESPN or ESPN2.

Good to see Illinois-Ohio State make the prime-time cut. There have been a lot of great games in Columbus. Just ask Juice Williams.

Hopefully the Big Ten scheduling and the lede to this post triggered that particular memory instead of the more recent drubbings of the past half decade. Since the Fighting Illini knocked off No. 1 Ohio State in 2007, the Illini haven't beaten the Buckeyes in six tries. One was vacated, but we know a loss happened. 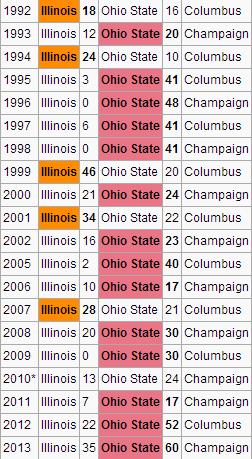 The sample size here--Clinton administration to Obama administration--tells the right story. I wanted to head back to 1988, so that Illinois' five straight wins from '88 to '92 could be shown, but then that would leave out Ohio State's 15 consecutive wins from Nixon to Ford to Carter to Reagan. I don't want to show 15 straight Ohio State victories here, or anywhere. Clinton will do.

Thing is, I shouldn't have good memories of this rivalry. I should be trapped with recollections of Jim Tressel and his smug little vest and glasses, lips pursed and pointing out read options to Troy Smith or Terrelle Pryor. But I don't. I think of Juice Williams running down the clock in 2007 to beat No. 1 Ohio State. I think of that game everytime.

Why does that happen? Well, because Bob Asmussen is right. Illinois and Ohio State have had a lot of good games in Columbus. If he said, simply, "good games," then he'd be slandering the heavy handed beatdown that this recent rivalry has been. But in Columbus? Yes, it's true. 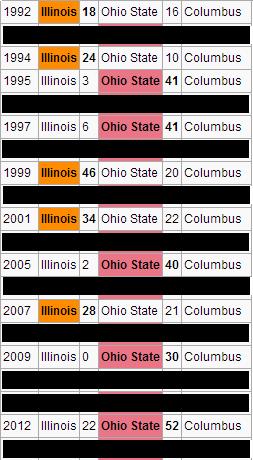 That's the same picture, only minus the games in Champaign. Illinois hasn't won a home game against the Buckeyes since 1991. But on the road, since 1992, this rivalry is tied, 5-5. On Nov. 1, Illinois might just push that record in our favor. You can watch it on your television, at night, on a popular station.

Until then, enjoy this--a video of Juice Williams remembering the famous 2007 upset. He gets first downs, Ron Zook gets a Gatorade bath and Ohio State coeds cry in the stands. Why does the 2007 memory sit atop the more recent ones? Because you tend to remember things that are awesome.