John Groce evidently likes numbers, so we took a look at a few of the most important ones this season.

Share All sharing options for: 2013-14 Illini Hoops By The Numbers

As disappointing as it oftentimes felt, this Illini basketball season ended as many expected: a berth (and eventual loss) in the NIT for a team that struggled mightily to score the basketball.

Though short on wins, especially during the middle of the Big Ten schedule, this team provided no shortage of story lines. The team dynamic constantly evolved, largely due to both the emergence of freshmen starters and the conference struggles of Rayvonte Rice. There was the hot non-conference start, the losing streak of death and destruction, the redemption, and small run at the tournament late in the year.

With all these story lines in play, it's fun (for a dork like me, at least) to see if the stats match up with the #HOTSPORTSTAKES of the year. Did Rayvonte Rice really struggle that much in the Big Ten schedule? What exactly caused the surge of strong play that ended the losing streak?

Through the magic of Ken Pomeroy's awesome stats database and Microsoft Excel, I took a look at some of the biggest stories of the year. 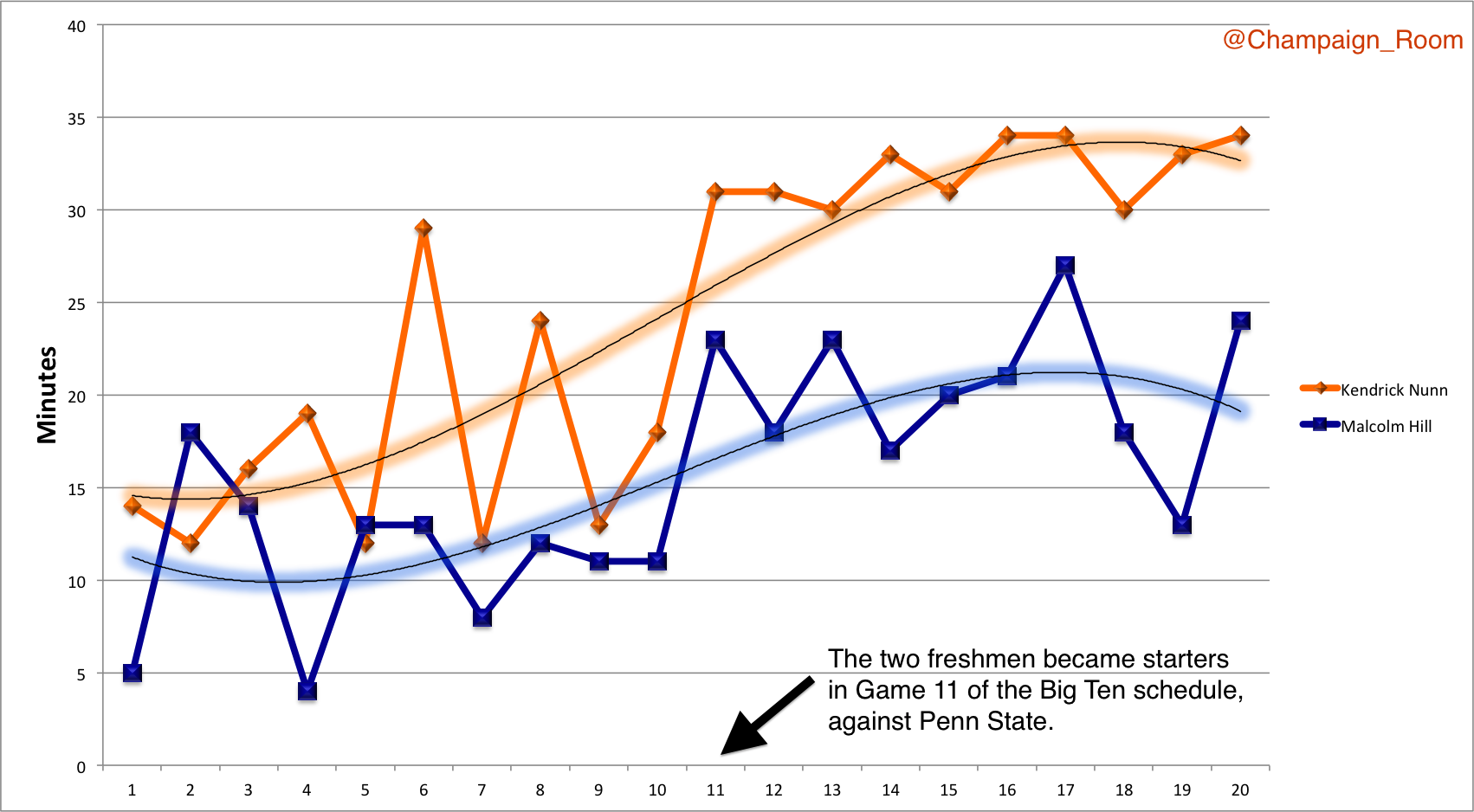 Perhaps the most encouraging story line of the season revolved around the gradual improvement of the two young freshmen: Kendrick Nunn and Malcolm Hill.

Nunn's development was sparked by an entrance into the starting lineup against Penn State, a team with which he had some bad blood. His minutes skyrocketed after that game and he quickly became a regular contributor in the starting five. Nunn provided the offense initially with some much-needed three-point shooting (31-for-80, 38.8 percent) and then later began to show a pretty floater and an ability to finish around the rim.

On the other side, Malcolm Hill was more slowly integrated into the lineup. He became a starter in the same game as Nunn, yes, but he occupied fewer minutes and was frequently subbed out for Jon Ekey in big moments. Statistically, Hill's game is sort of astounding. On a team with one of the lowest free throw rates in the country, Malcolm Hill's rate is 50.1, meaning that over half of his shot attempts come from the free throw line. For your reference, Illinois as a team has a free throw rate of 31.2, which ranks 341st in the nation. Yikes. Hill also boasts some nice rebounding ability and is one of those guys who will get a "quiet" 10-12 points on any given night.

Both of these men are going to be very solid Illini in the future, but they each have a couple of things they would benefit from focusing on in the offseason. One of my favorite things about Nunn is his aggressiveness and emotion. When DJ Newbill threw a punch at him, Nunn jumped right back to get up in his face. Personally, I'd love to see some of that from Malcolm Hill as well. I hope to see him confident and even angry at times, especially if he's going to have to rebound and get to the rim against some bigger guys. Hill will almost certainly play at the four from time to time next year.

Nunn could learn a couple of things from Hill as well. I would posit that Kendrick doesn't get to the free throw line enough, something that plagues many of our beloved Illini (Hi, Nnanna). Nunn draws just 2.1 fouls per 40 minutes, and only took 26 shots from the line this year. Free throws are just about the easiest way to get points, and Nunn would do well to aggressively go after foul calls. Lastly for Nunn, I'd love to see him get a few minutes at the point next year. He's a good enough natural passer, but he'll need to lower his turnover rate (18.5%) if that's part of Groce's plan for him. 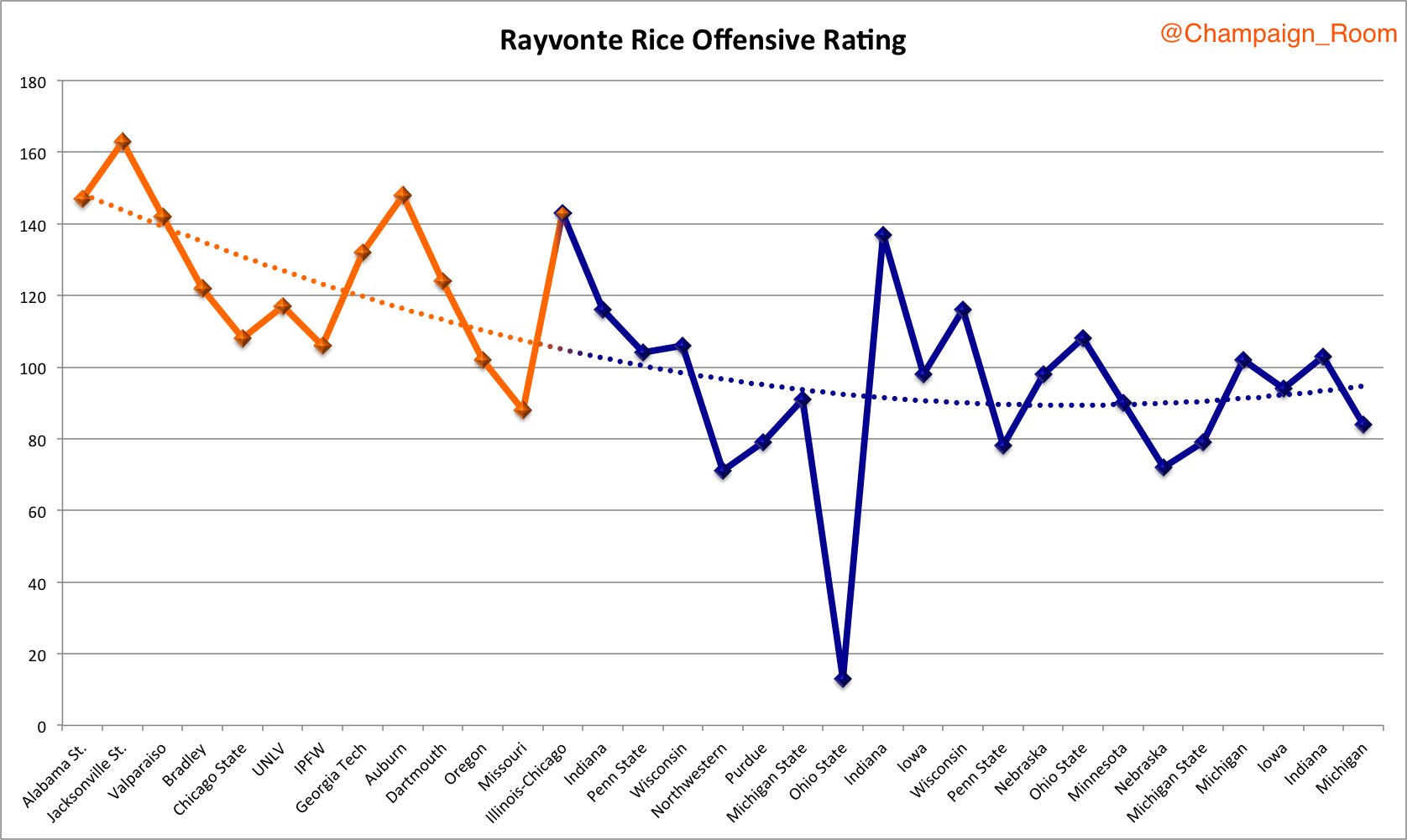 One of the biggest narratives of the year revolved around Rayvonte Rice's non-conference explosion and subsequent decline in conference play. Above, the blue portion of the graph accounts for the conference schedule, and there was clearly a slight decline in Rice's efficiency. Briefly, please take a look at Ray's offensive rating in the first Ohio State game. Yes, that is what an offensive rating of 13 looks like. Now, I encourage you to dab your eyes with a tissue until the bleeding stops.

Though there was certainly a decline in Ray's play, I actually think the narrative was slightly overblown. If you took away the Ohio State game and the few games before it where Ray was hampered by an injury, as well as the games against the weakest non-conference opponents, there would only be a tiny decline in his play. I do agree that it looked as though he was less aggressive and efficient in Big Ten play, but I'm not worried about him having success in the B1G next season. 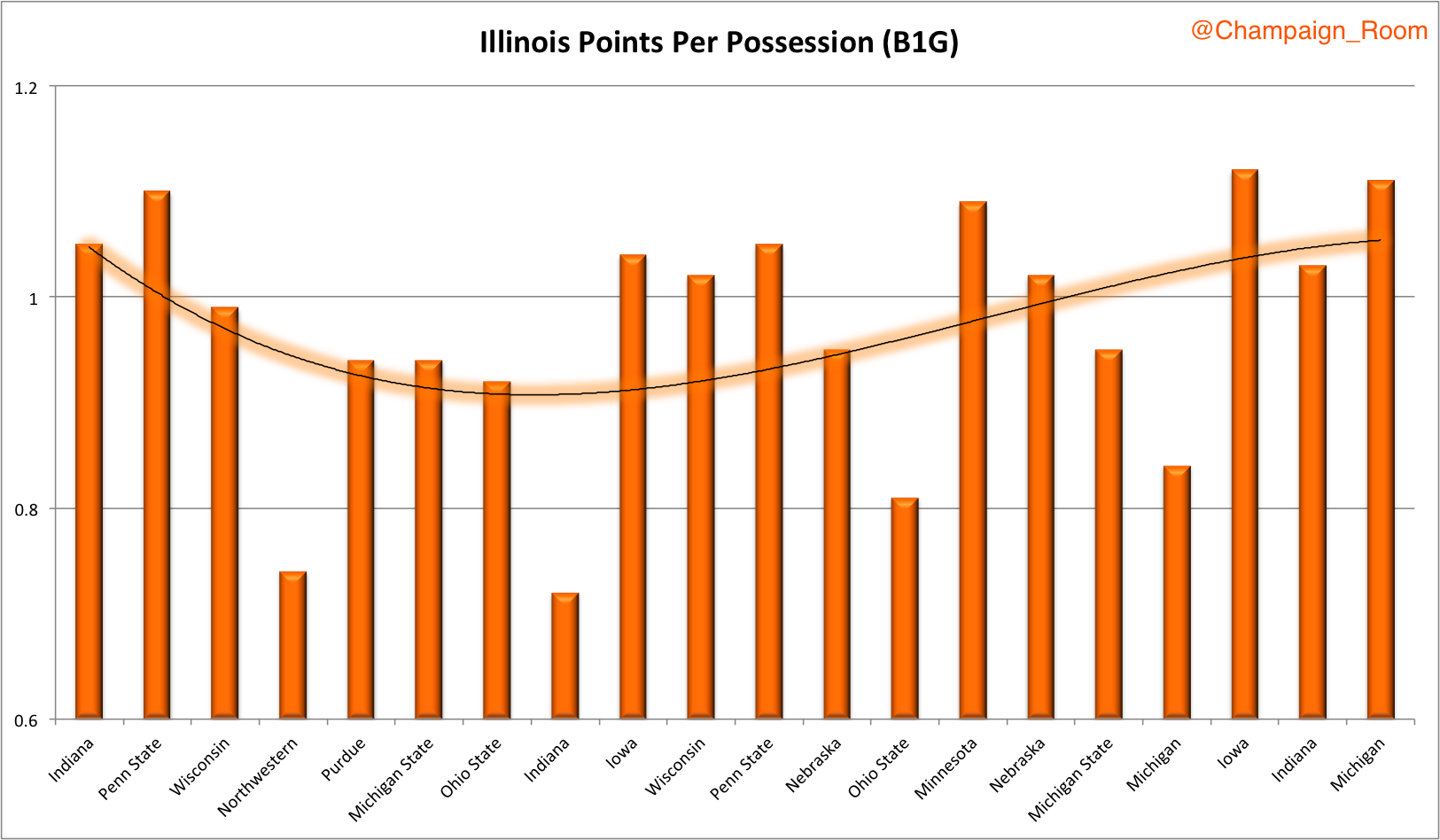 The Illini offense was just plain bad this season. Kenpom has their offensive efficiency ranked 179th in the country and second-to-last in the Big Ten. The Illini couldn't shoot (303rd eFG% in the country), they couldn't get to the line (341st in FT Rate), and they couldn't really get offensive boards either (179th in OREB%). Perhaps the only redeeming quality of the offense this year was their ability to limit turnovers, but those extra possessions don't mean much when your shooting chart is a picture of a dumpster fire.

It is certainly worth noting that the slight improvement the offense did have began almost immediately as Nunn and Hill were inserted in the starting lineup. These two, and especially Nunn, brought a new energy to the offense. It certainly felt that way watching the team, and it is always nice when that's reflected in the nerd stats. Overall, this year's O was bad by any standard, but it was very good last year under Groce and I have full confidence in the team's ability to improve next season with better personnel. 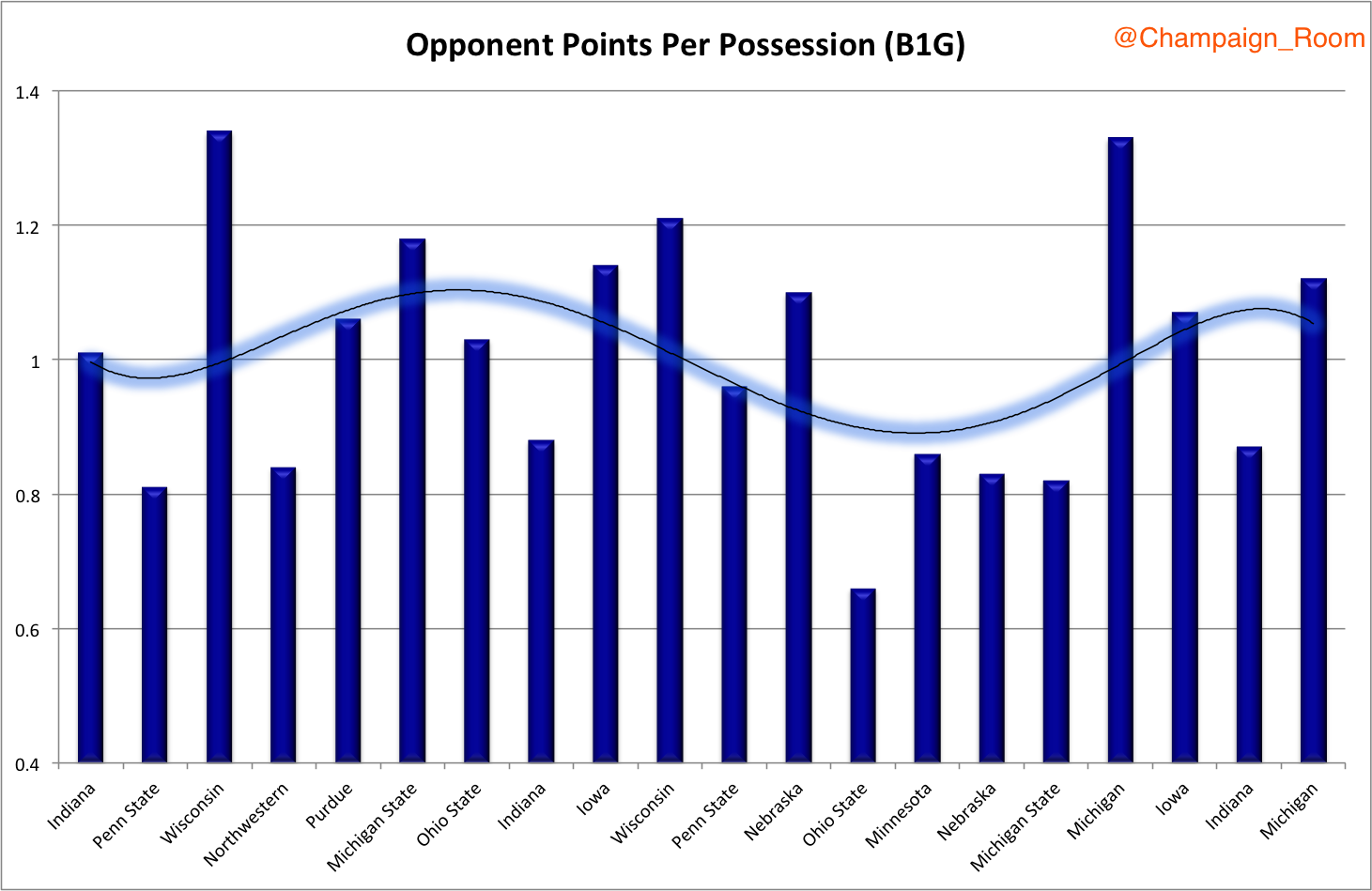 The defense, on the other hand, was absolutely fantastic against all but the elite offenses of the B1G. Wisconsin and Michigan tortured the Illini, accounting for four of the worst six performances by this defense all year. Taking away those games, the offense was able to hold nearly every other opponent under wraps in at least one of their matchups. The Illini defense currently ranks 11th in the country per Kenpom, and it's well deserved.

The most crucial part of their defense over the full year was their ability to limit efficient shooting (112th in Opp. eFG%) and prevent opponents from getting to the line (34th in Opp. FT Rate). However, the Illini's turnover rate may have actually been the most important part of the defense in Big Ten play specifically. 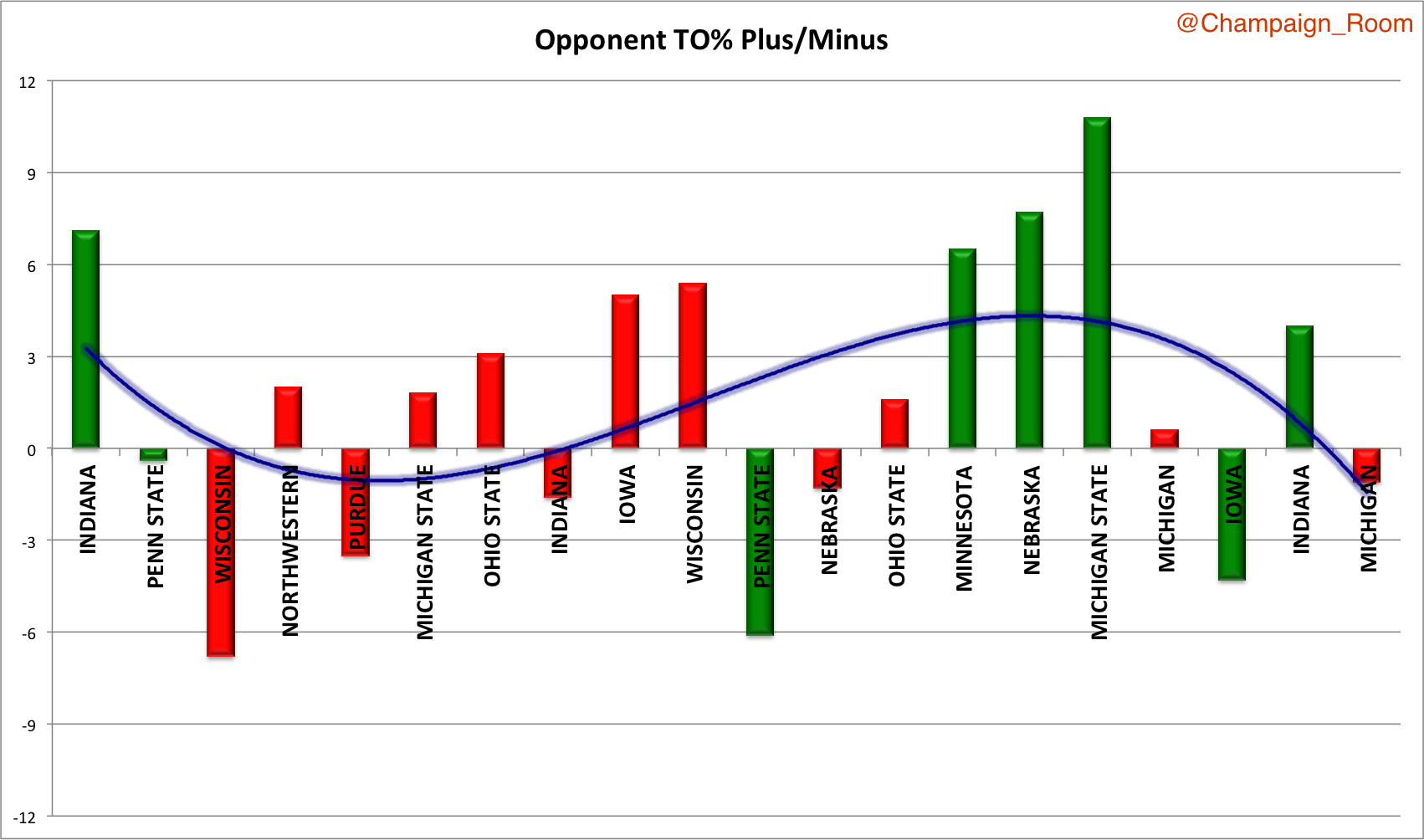 The above graph highlights the difference between each opposing Big Ten team's offensive turnover percentage this season and the TO percent Illinois caused them to have in each game. Red columns indicate losses and green columns indicate wins.

Focus on the trend-line above as you think about the narrative of the conference season this year. Though there were a couple of decent games for the defense during the losing streak, a clear catalyst that brought the team out of that slump was a gigantic increase in opponent turnovers. Minnesota, Nebraska, and Michigan State all threw the ball away relentlessly in those season-saving games.

This makes sense: Illinois really struggles to shoot and score in the half court. By forcing all these turnovers and acquiring fast-break possessions, the Illini were able to relieve some of the pressure on their offense and finally put up enough points to break out of their slump. The Illini did a good job of getting steals in the turnover-averse Big Ten, and that frequently led to their biggest wins.

As it turns out, the stats did bear out most of the stories that became evident by the eye test as the year went out. The young'uns were really good and really fun. The offense sucked but got a little bit better at the end. Rayvonte is still great and (in my opinion) better than he got credit for in the conference schedule. Turnovers were crucial in a few big wins for this team.

This Illinois season was a rough one, and I'm sure there will be people calling for John Groce's head if we have a tough start next year. Still, I believe there was plenty of encouraging evidence to suggest next year will be good. The defense was elite this year and the offense just needs a major dose of kids who can shoot. The young freshmen should all take a second-year leap and greatly improve. We can finally put a cap on a season that met our expectations, but went no further than that. Next year, I think we'll have a tournament bid and a performance that we can truly celebrate. Okay, one last thing before you go: 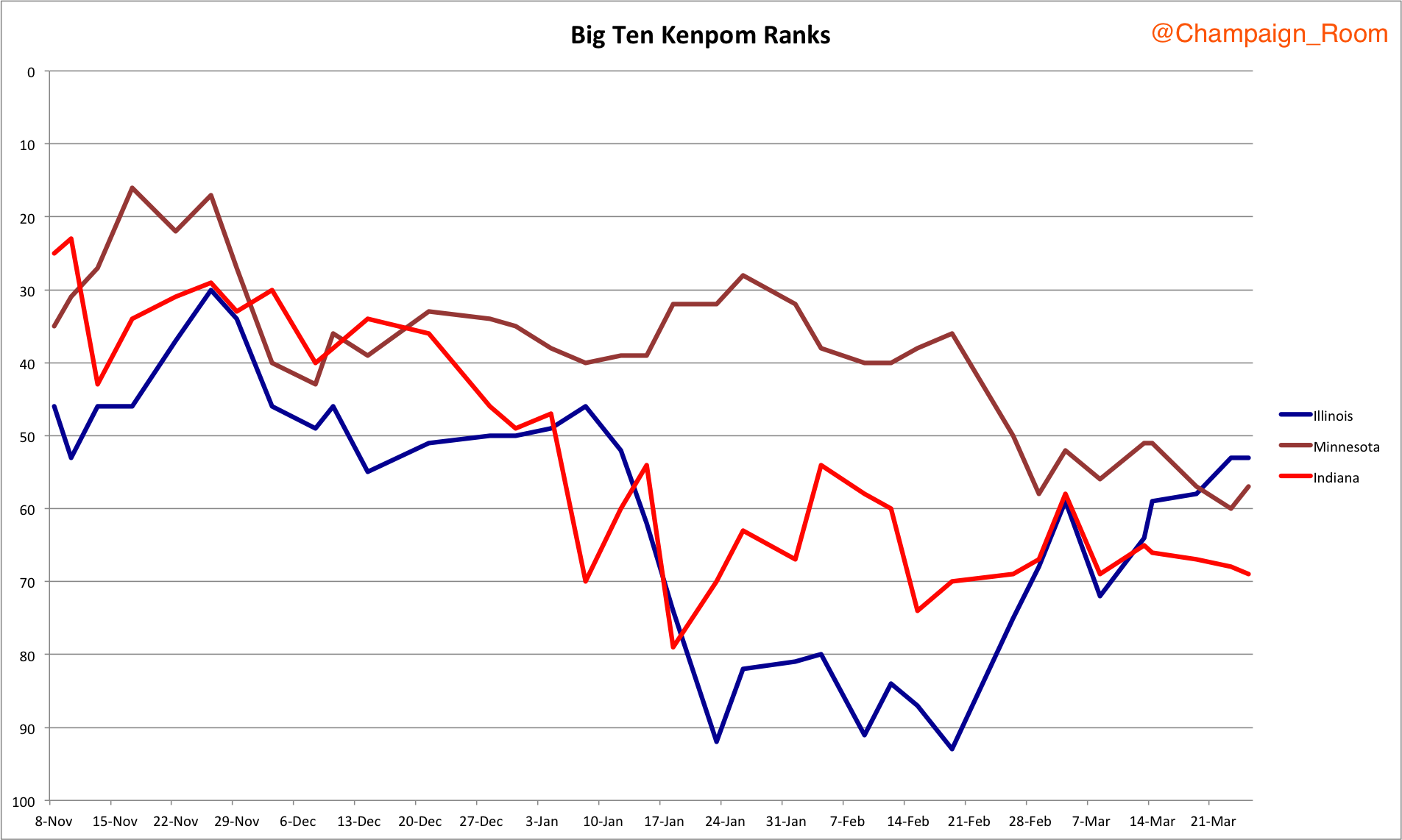