I couldn't remember when Illinois played their first round B1G Tournament game in 2010, so I went to Google and mindlessly typed in my search: "2010."

That's it. Just "2010," forgetting that Google doesn't realize it's Big Ten Tournament week. My mind's operating with the words "Big Ten Tournament" in every thought, but Google is just some nerds with algorithms. They left me with the 2010 IMDB page and the year's Wikipedia entry, which reads:

That's all well and good, Google, but when did Illinois kick off their tournament?

Answer: Friday. Illinois was the five seed, which earned them a first-round bye in the expatriate era of 11 teams, and their first tournament game was on Friday. I'd say 2010 was a common year, too. Hat tip to you, Google.

The year after the common year was 2011, and Illinois again began their tournament on a Friday. They lost to Michigan, back when Michigan was merely average. I hated 2011.

Let's look at the years since because those years have some similarities to this year, primarily in their Big Ten Tournament seeding--8 or 9.

I'm examining the lead-in to each tournament because despite only one year and a similar roster, those lead-ins differed dramatically. One a train wreck, the other hopeful. One with Bruce Weber's lameduck carcass, the other with John Groce's coffee infused elation. One with juniors, the other with seniors. One a win, one a loss.

I used the term "trainwreck" above, but what a deficient term. A wreck implies a single moment of impact. This "wreck" was a train crashing into a wall, then through a building, down a hill and into a valley, where it destroyed several other buildings. Here is photo evidence: 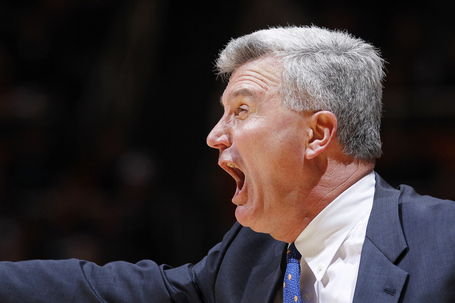 I'm a Bruce Weber fan--I still am--but everyone including himself had resigned themselves to his firing. Most actively called for it. The Bruce Weber history book has been written before, a lot of it on this site, so I won't get into it now. I'll get into this instead. 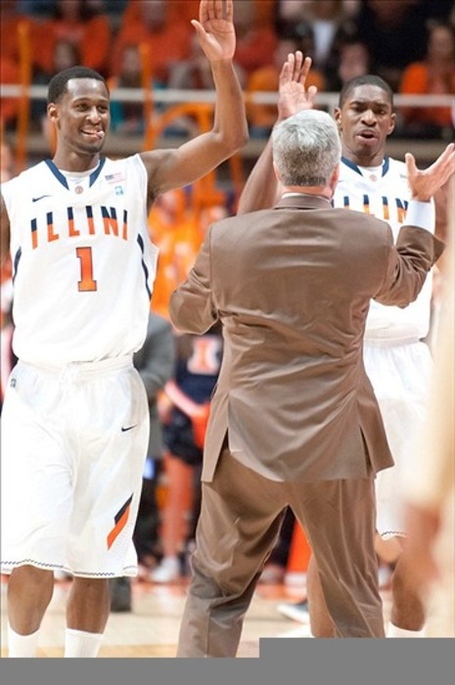 This picture is from late in the 2012 season when Illinois beat Iowa at Assembly Hall, 65-54. It marked the last win of Bruce Weber's Illinois career. It also marked his most abnormal. Bruce refrained from screaming and instead cheered. Cheered. After timeouts, he ran out to high-five players and clap and fist pump. The picture above shows one of those moments. The last good moment, really.

The streets ran red with blood...

Blood is the right word. Illinois fans wanted it after the first Iowa loss and before the second. They wanted Bruce Weber's head. In the past 15 years, Illinois basketball had not been as unhealthy as it was during the end of the 2012 season.

What a difference a year makes. For awhile, this didn't seem the case. By mid-February, Illinois looked to be in the same skid they've skidded for years, losing haplessly over and over again. But then they beat Indiana.

After Indiana, they beat Minnesota. They held tough in the B1G. They were good. And then their annual 11:00 a.m. game rolled around, Brandon Paul did this.

Last year was so damn fun.

Illinois first Tourney game came after consecutive losses to Iowa and Ohio State, but those losses came on the heels of a winning streak. And the positives of winning streaks last longer on the shelves than the negatives of losing streaks. We had banked some swagger for the Minnesota game. The effect is above, the cause is below.

Which 11:00 a.m. game will we see this year? If you're looking for another clear difference in the two year data, then look at the late season Nebraska game.

- In 2012, Meyers Leonard sobbed on the bench with a towel over his face and assistant coaches comforting him while his team lost by 23 to a terrible, terrible Nebraska team. (That really happened. What a cruel season.)

- In 2013, however, Nebraska came to Illinois on our senior night. We honored Brandon Paul, D.J. Richardson, Tyler Griffey and Sam McLaurin. Then we won and it was a wonderful night. Delightful, really.

This season also has a late season Nebraska win. And a John Groce. And a stretch-run winning streak. The more you examine, the more you lean towards another 2013-like tournament run and with it, some happiness.

All that's left to do is beat this year's opponent with a buzzer beater. Has that ever happened?