Next year could still be great for the Illini's oft-criticized big man.

Share All sharing options for: Stay Patient with Nnanna Egwu

Every time Nnanna Egwu pulls up for a three-pointer, you can feel the eyes rolling miles away from the State Farm Center. Given Egwu's strong finish to the 2012-13 season, it wasn't totally unreasonable for fans to expect an All-Big Ten level performance this year. Nnanna was great in the final tournament game against Miami, tallying 12 points and 12 rebounds, with seven (!) of those boards coming on the offensive end.

Unfortunately, despite a strong start, Nnanna still seems to be the same player he was last year. Offensively, some might argue he has regressed. Egwu's shooting efficiency has dropped off a cliff compared to last year.

Through last night's win over Nebraska, Egwu is sporting a true shooting percentage of 45.9 and an effective field goal percentage of 42.5. In the 2012-13 season, Egwu had a TS% of 48.3 and an eFG% of 46.2 (all stats courtesy of RealGM). Nnanna has become so much less efficient for two primary reasons; a bad slump and a curious shot distribution.

In January, Nnanna had the second-worst shooting month of his career, with a TS% of 33.7 and an eFG% of 33.3. That is horrendous. I once watched John Wall take 42 three-pointers and make just three over the course of the 2011-2012 season. It was a Mardi Gras-worthy parade of bricks. Still, watching Nnanna struggle through that slump was more painful.

There is reason for hope, however. Nnanna has returned to his old self in February and his shooting percentages are up to where they were in November. Curiously, Nnanna has experienced shooting problems in December and January in every year of his career thus far: 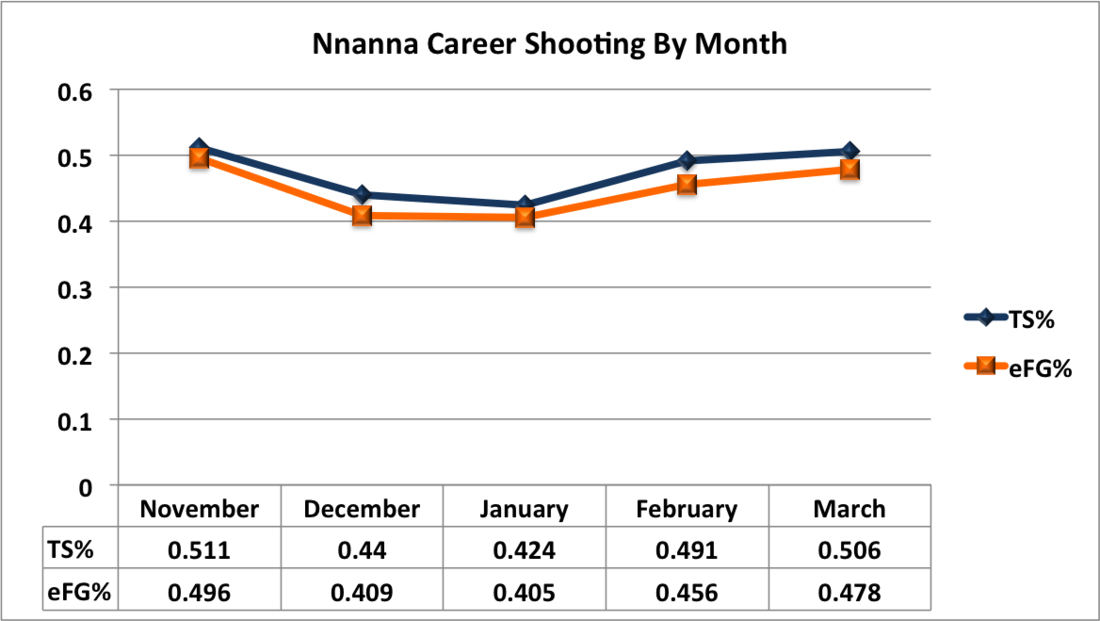 The ever-changing level of competition can partly explain this phenomenon--November is typically reserved for the easiest non-conference games. The most confusing part of this chart lies furthest to the right: Nnanna gets hot again in February and March. Perhaps Egwu just needs to settle into the Big Ten schedule before he restores his efficiency, but it's a confounding problem.

The second reason for Nnanna's lack of efficiency lies in his shot selection. Nnanna has been nothing short of highly questionable in this department. He's taking 1.2 three-pointers per game and making just 21.7 percent of them, which will do wonders to kill your efficiency. His three-point shooting percentage is up from 16.7 percent last year, but that's still not enough to justify hoisting up a three-ball every game. He's also been favoring the midrange jumper more than in years past, which is the least-efficient shot in basketball.

Heading into next year, it appears Nnanna will face a big fork in the road of his offensive development. Everybody loves to shoot threes and midrange jumpers, but that won't be the right path for Nnanna unless he continues to improve his shooting. On the other hand, Nnanna could dedicate himself to improving his scoring on the block. This would almost certainly lead to more efficient shooting, but it doesn't seem to be Egwu's preferred option.

Watch him for a few possessions each game and quickly get a sense of how much the team needs him on the defensive end.

Though I'm almost certainly in the minority here, I'd love to see Nnanna continue to expand his outside game. If he can improve his three-point shooting to a 30 percent clip or greater, I will fully support him taking a couple of threes a game. That's the equivalent of shooting 45 percent on two point jumpers, which is better than he's been performing at the midrange this season. Yes, he would be above that percentage if he took all of his shots at the rim, but it seems clear at this point that Egwu doesn't want to be a low post player. Good three-point shooting from big men also greatly improves spacing, opening up shots and driving lanes for other offensive threats (Hi, Kendrick Nunn).

Check out this article by Grantland's fantastic NBA writer Zach Lowe. At the bottom, where Lowe lists his ten likes and dislikes, the fifth entry has great relevance to this conversation. Al Jefferson is a dominant post player who takes in double teams, and he's paired with a Josh McRoberts, a pretty solid outside shooter. When these two play together, defenders are put in the unenviable position of having to rotate off one of the Bobcats' good three-point shooters. If you were too lazy to click the link, here's the play in question:

You can (hopefully) see how Kemba is gifted an open three because Al Jefferson requires a double team and Josh McRoberts can't be left alone outside. With Leron Black, a solid scorer and rebounder down low (though he also has a jumper!), coming in next year, Nnanna should have more freedom to operate around the perimeter. Whether through pick-and-pops or spotting up on the outside, Nnanna can have a great effect on an Illini offense that has greatly struggled with spacing.

However, my dreams of Leron dishing to Egwu and Kendrick Nunn for threes remain purely hypothetical. All of this hinges on Nnanna being able to further improve his shooting. That said, there is some precedent for him having this ability. Nnanna's free-throw shooting has improved significantly every year at Illinois, and his three point percentage has taken a slight jump already: 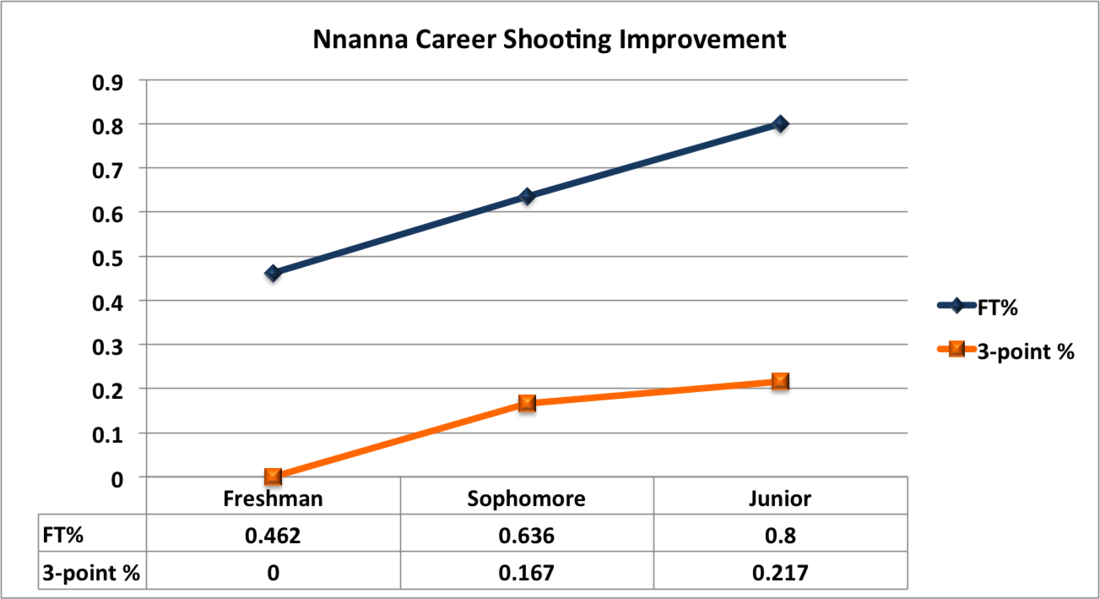 It's extremely impressive just how consistently Egwu has bettered his free-throw shooting each year, as most players struggle to maintain confidence at the line when struggling. This type of consistent shooting development leads me to believe that Nnanna has the potential to make a big jump in efficiency next year. If so, Big Ten defenses would be faced with a fearsome, versatile big man.

As frustrating as Nnanna has been on the offensive end, he's been one of the top defenders in the Big Ten all year long. Unfortunately, there are no SportVU statistics for NCAA games, otherwise we could check out the opponent's field goal percentage at the rim when Egwu is defending. Instead, the best statistic available is probably block rate. Spoiler alert: Nnanna is pretty darn good at rejecting people.

Egwu is second in the Big Ten in blocks per game, deterring 2.32 shot attempts per game. He also ranks fourth in the B1G with 3.19 blocks per 40 minutes. His block rate (the percentage of opponent field goals that he blocks while on the floor) is 8.65 percent, good enough for sixth in the Big Ten.

All of these statistics come together to show that Nnanna is unarguably one of the top shot blockers in the conference. It's also extremely hard to represent his constant defensive effort through statistics, but watch him for a few possessions each game and you'll quickly get a sense of how much the team needs him on that end. As the only experienced big man on the roster, Nnanna's defensive presence and rim protection will be sorely missed when he is gone.

There's one final aspect of Nnanna's game which has come a long way since his freshman year, and that's rebounding: 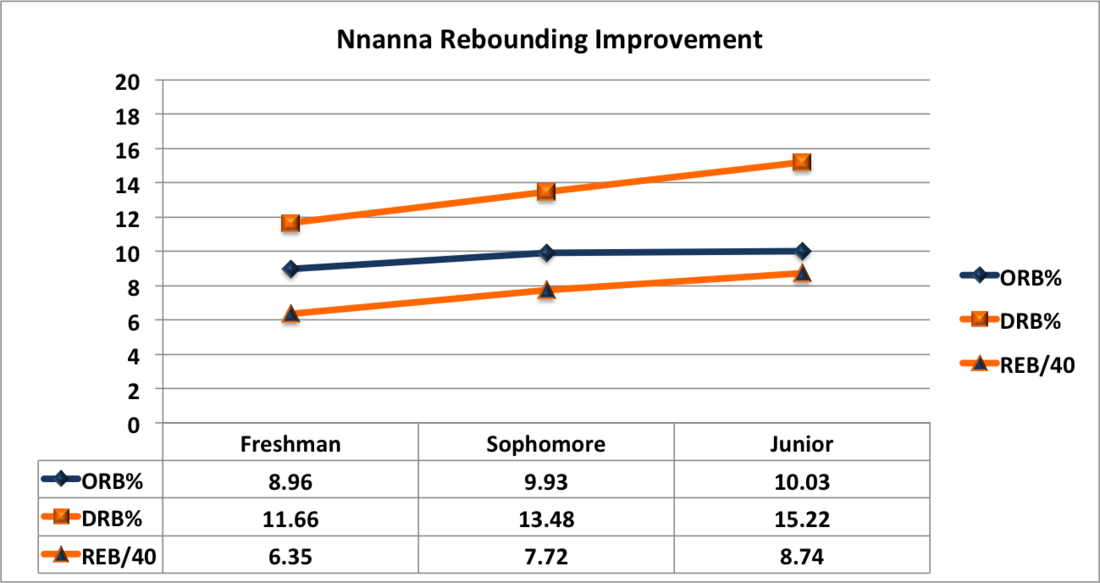 Nnanna has steadily improved on the boards each year, and it really jumped out at me the last few games. Nnanna boxed out aggressively down the stretch against Minnesota, which was crucial in preventing a comeback of easy put-backs and kick-outs for threes. Most fans can probably agree that Nnanna should work harder to grab the ball on offensive boards, not just constantly tip it out. This has been a slight problem, but Nnanna's hard work to improve his rebounding should not be ignored because he gets a little tap-happy two or three times a game.

Robert of Illini Board (ALionEye) frequently talks about the Four-Year plan for freshman who are loaded with potential. Ideally, they should get solid minutes in their first year, become a starter as a sophomore, improve their game as a junior, and acquire All-Big Ten honors as a senior. While Nnanna hasn't improved his offense from his sophomore season, everything else looks better. He should have a chance to be All-Big Ten in his senior season, especially if the team improves.

His defense has been fantastic and his rebounding will likely stay decent, but they don't give out awards for great rotations and boxing out. Those two parts of his games are probably set in stone at this point. Nnanna's path to conference recognition and an outside shot at the draft comes down to what direction he takes at the fork in his offensive development. Whichever road Nnanna goes down, whether he expands his post game or upgrades his shooting, he's earned the support of Illini fans.