It's sure to be trendy.

Share All sharing options for: Ellen DeGeneres Says, "Get to the Quad at 3:00 p.m."

The funny, always dancing Ellen DeGeneres announced yesterday that something will be happening at the University of Illinois today at 3:00 p.m. on the Quad. Be there.

She's usually on top of the trends. When flash mobs came through the works a few years ago, she mastered it. Now she's on Vine, playing the peak of that trend as well. And when the next big thing comes through, you better believe she'll have a handle on that situation as well.

So, what can you expect on the Quad today? It might just be that next big thing. Or, it might be a flash mob. Or, just normal dancing. She likes dancing and she'd like you to dance with her. These are all possible.

Tomorrow, I have a big surprise for the University of Illinois. Be on the quad at 3PM CST. Don’t say I didn’t warn ya.

UPDATE AT 2:00 PM CST-- You have approximately one hour to change into your best Halloween outfit:

Alright Illinoisters. I can't wait to see you on the quad! Dress up as your favorite movie character, and you could win big. #Ellenois

FINAL UPDATE (From Matt Silich) -- I went to Ellen's "surprise" yesterday expecting a blimp to fly over and drop hundreds of thousands of dollars on our heads. While that didn't happen (yet), a bunch of other stuff went down, most of it unexciting. Most students arrived at the main quad between 3:00 and 3:20, creating a pretty huge crowd: 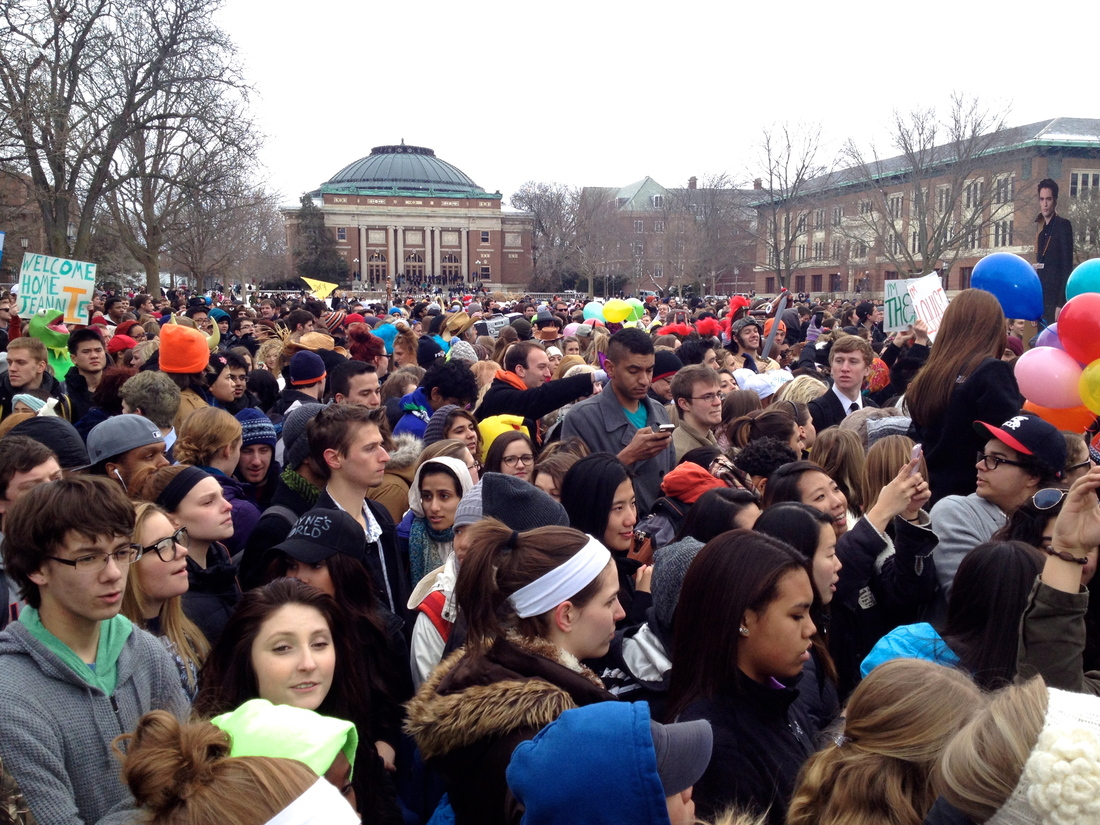 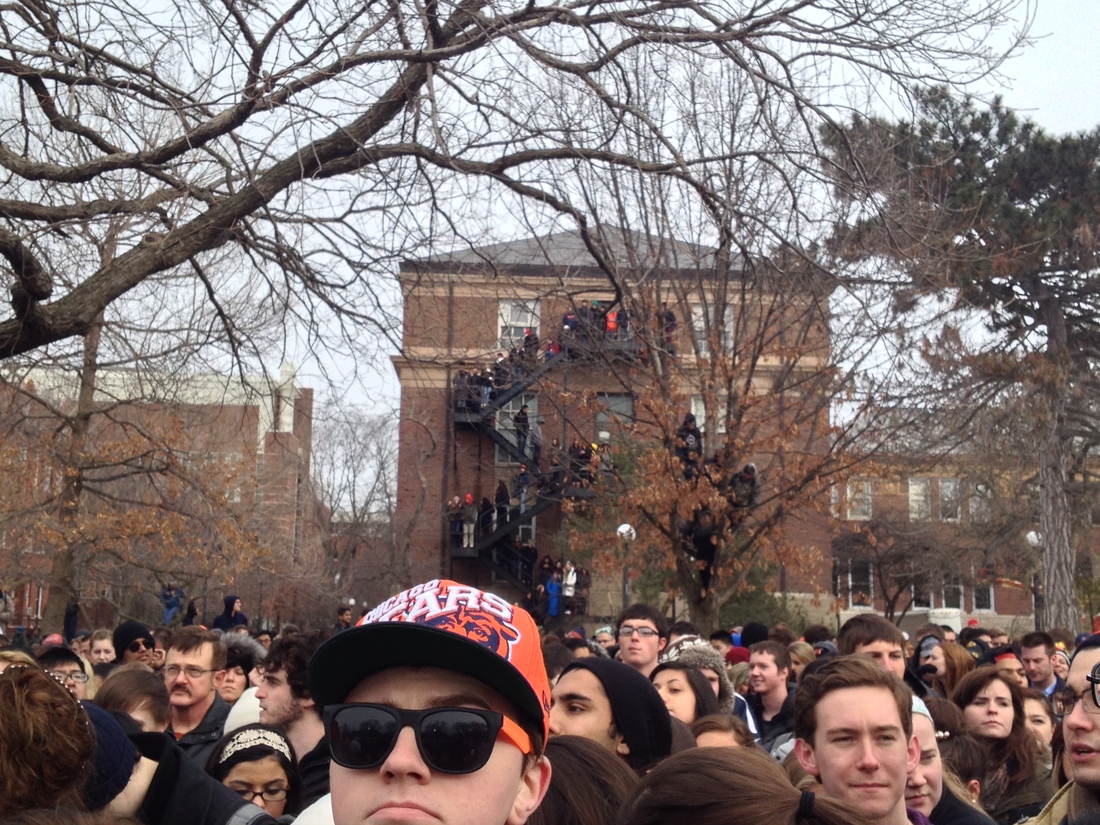 Shown above are some people who took to the stairs to get a better view of the action.This was pretty common, and some people built big mounds of snow/ice to stand on just outside the huge crowd. The Daily Illini reported today that about 4,500 people attended the event, a number that doesn't surprise me one bit. I wriggled through the huge crowd long enough to get about six rows of people from the main stage, where...nothing was happening: 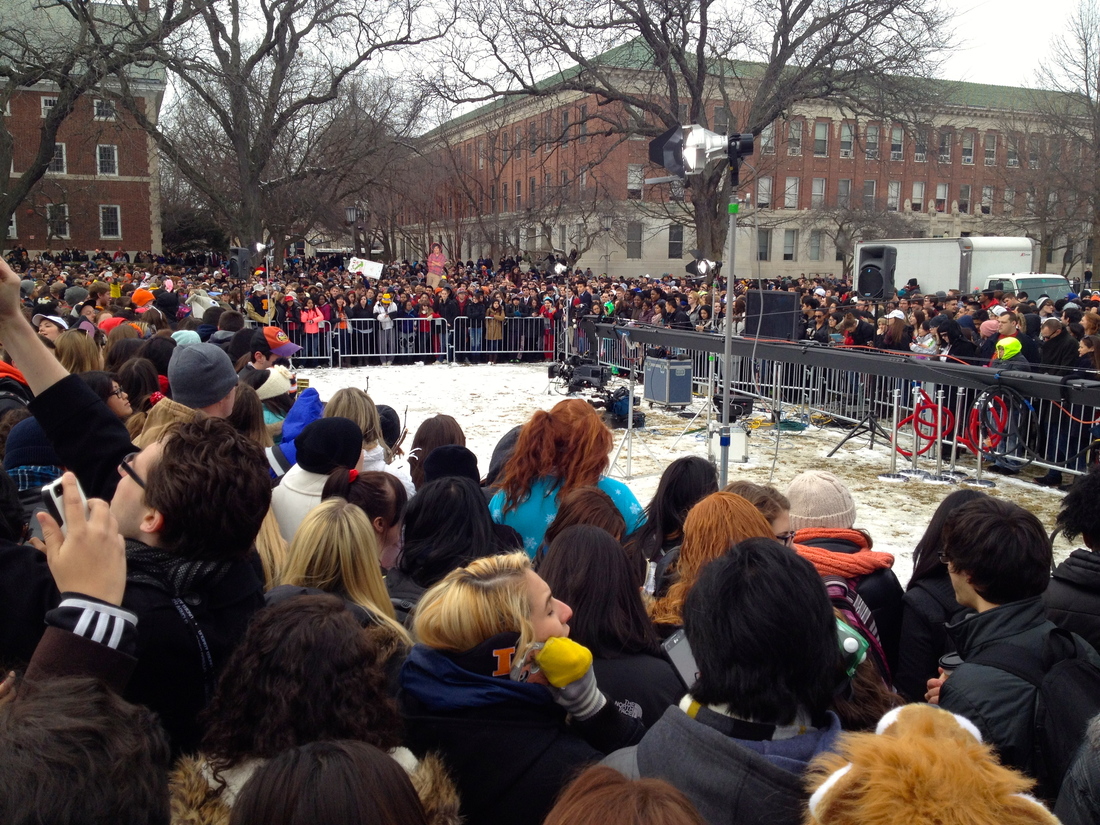 A beach ball was bouncing around the crowd for upwards of fifteen minutes as we waited for someone to tell the audience what was happening. After waiting a while, Illinois alum Jeannie Klisiewicz came out and addressed the crowd. She laid down a few ground rules about safety and being a good audience. Ten minutes of excited speaking later, she announced that the filming for the show wouldn't occur for another hour.

At this point, many students began leaving the quad and going to their next classes. The excitement was drained out of the crowd a little bit, as most people expected the "surprise" to occur right around 3:00 PM (myself included). Before leaving, Jeannie announced roughly ten "finalists" who had the best costumes in the crowd. A few people stood on shoulders to get noticed, including one giant volleyball next to me (Wilson, from Castaway) who was lifted up by five people until a crew member saw her. She got on the show, so it was worth the effort. Several people really went all out with their costumes, even on short notice: 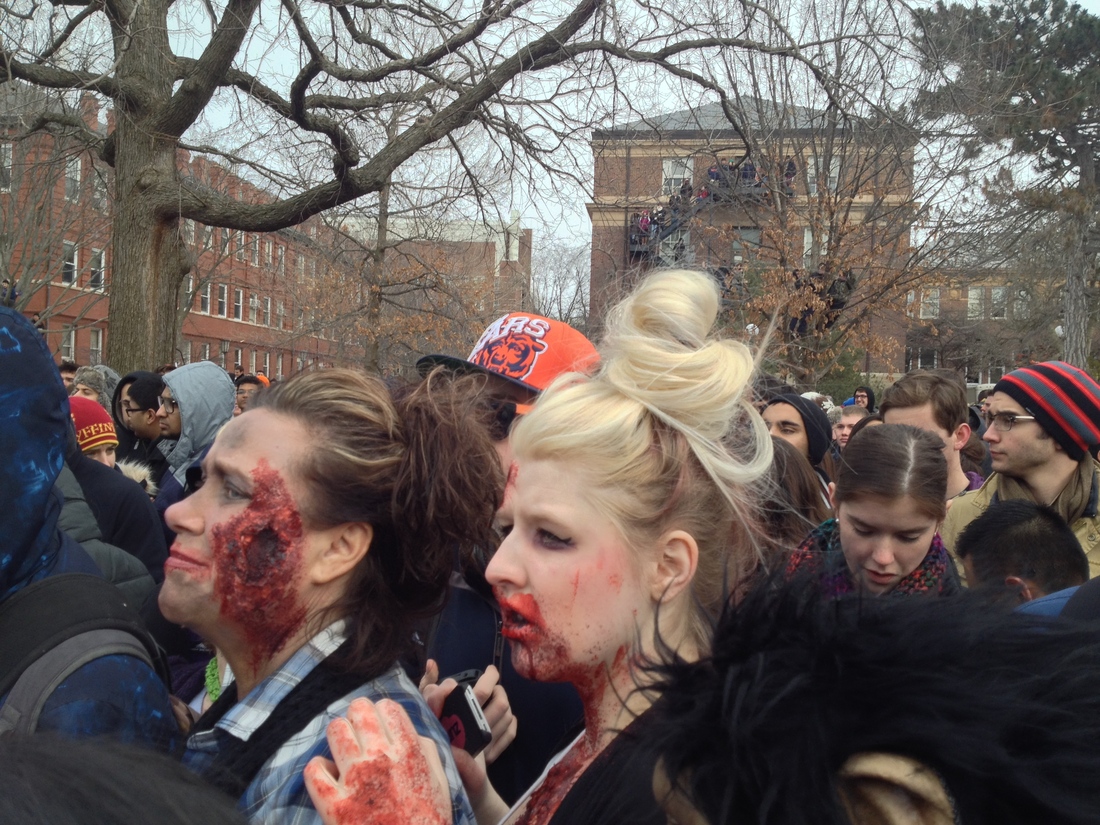 Around 4:15, with the crowd nearly entirely disbanded save for a few hundred members, the cameras began filming and a few waves of excitement flowed through the crowd as everyone best positioned themselves to get on TV. Unfortunately, a prior commitment and the death of my phone forced me to leave at this point, so I never got any pictures of the segment being taped for the show. Here's what the stage looked like just before I left, including a few of the finalists: 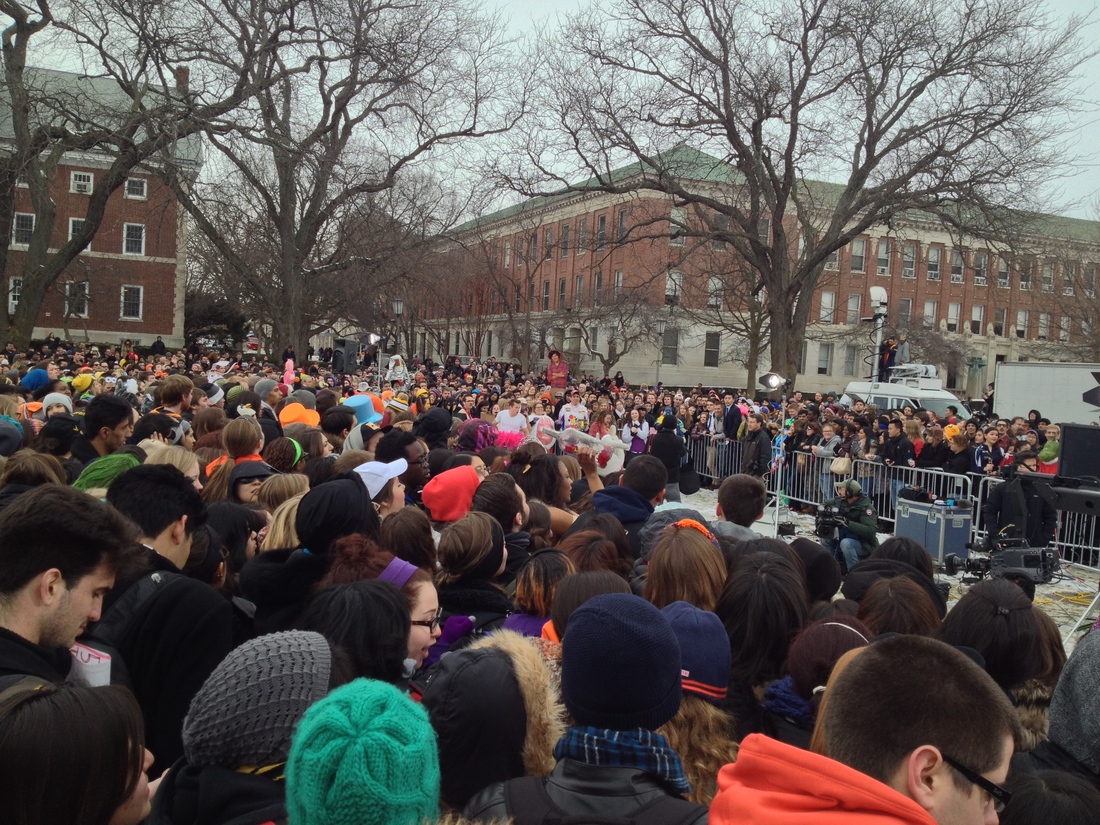 If you look closely, you can see the aforementioned Wilson, Joaquin Phoenix's character from Her (strange movie, by the way), Ricky Bobby from Talladega Nights, and a couple other finalists. Rumor has it, after I left, Ellen appeared on that television screen you can see on set and interacted with everybody for a little bit. Following that, a competition of some sort supposedly took place, with the winner(s) acquiring two tickets to see her show after the Oscars.

This episode of the Ellen Show will reportedly air this Wednesday (the 26th). Be sure to look for me on TV, because I'm the most important person on Earth. Though the surprise wasn't all that exciting, it was still a pretty cool experience to have the Ellen Show on campus. People were thrilled that the show came, and Jeannie seemed genuinely ecstatic to be back at the U of I.