John Groce awarded the freshman a starting role, and he has exceeded expectations thus far.

It’s safe to say this could be the worst year of combined Illinois football and basketball seasons in quite some time. Few need to be reminded of this. Exciting moments have been few and far between during this disappointing season of hoops. Most of my joy has come from Kendrick Nunn supplying fans with those fleeting flashes of exuberance.
Nunn cemented himself as my favorite Illini early in the Big Ten season. If you haven’t seen the video of Penn State's D.J. Newbill and Nunn getting into it, you should do so now and immediately improve your quality of life.  Nunn plays with a fire and intensity unlike anyone else on the team. The last couple of Illini teams, especially the 2011 team, seemed to lack that fighting spirit and character.

It’s been exciting to watch his steady statistical growth. All of the freshmen have improved in various ways, but Nunn has emerged as the leader of the pack, proven during an outstanding performance on the road against Penn St., in his first game as a starter. Nunn tallied 19 points on four of nine shooting from beyond the arc, including the game-clinching three with less than 30 seconds remaining.
As thrilling as it was to see the potential of Nunn in that game, a one-game sample isn’t a great indicator of a player’s talent. Even Kwame Brown scored like 30 points one time…probably. Now, after a couple come-down-to-Earth games against Nebraska and Ohio State, it’s more appropriate to investigate the differences between Kendrick Nunn, the bench player, and Kendrick Nunn, the starter.
Two quick things before we get into the numbers:
1. All the following statistics are courtesy of RealGM.
2. Sample size: Nunn played 92 total minutes in his three games as a starter, and 292 total minutes in his 19 games of significant playing time from the bench. That’s not an overwhelmingly large difference between our two sample sizes. 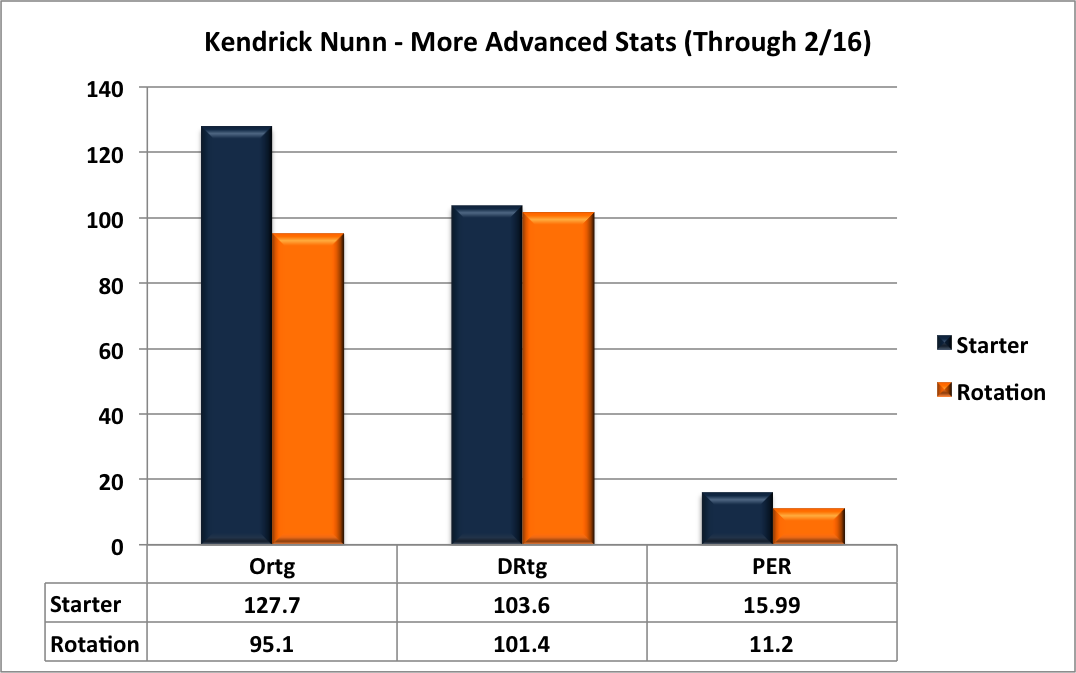 Since becoming a starter, Kendrick Nunn’s offensive rating has skyrocketed, thanks primarily to the Penn State game. His defense has slipped slightly, but the decline can be credited to his guarding starting players, as opposed to sixth men. And for his player efficiency rating, Nunn has improved to an above-average level (an average PER is 15.00). 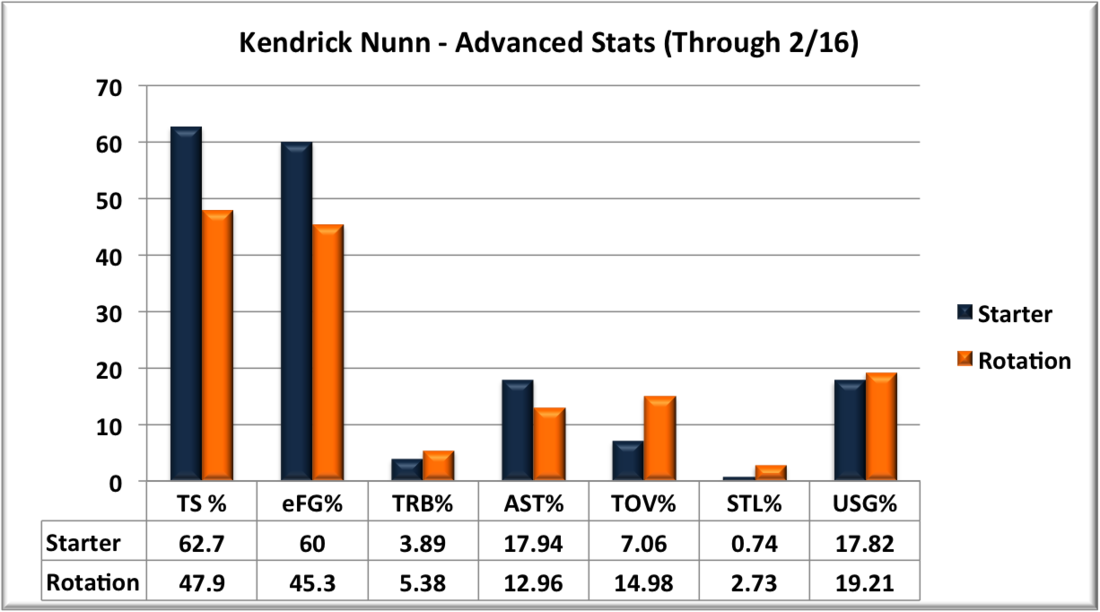 Looking further into the data, we find what we already know: Kendrick is balling right now. His true shooting and effective field goal percentages are through the roof compared to his previous marks, and he’s accomplished that while maintaining a very similar usage rate. This high efficiency may not keep up for Kendrick, given his previous numbers, but it’s clear he’s benefiting offensively from playing more frequently with the other starters.
Compare this with Brandon Paul's freshman year: Of the above seven categories, Kendrick Nunn bests Paul in four (TS%, eFG%, AST%, TOV%). Paul had a much higher usage rate in the fifteen games he started (involved in 26 percent of Illinois possessions), thus, his lower efficiency.
Perhaps the most important finding from this statistical study is the impressive reduction in Kendrick’s assist/turnover ratio. He turned the ball over far too often in his 19 games as a rotation player, but he’s since cut his turnover rate in half and simultaneously raised his assist rate. Those freshman mistakes Nunn made somewhat frequently throughout the early part of the year are beginning to disappear, and John Groce is trusting Kendrick more with each passing game.
In case you're still harping on me for looking for a conclusion from such a small sample size, it's pretty easy to expand our sample to Kendrick's last ten games of significant playing time. In those ten games, Nunn's offensive rating is 108.2, and his PER is still 12.47. His assist rate is 15.78 percent and his turnover rate is 11.10 percent. All four of these are still improvements over the rest of his season, as is the case with nearly every category. Nunn's ascent has been slower and steadier than the above charts may indicate, but it's there and it's tangible.
Many Illini fans expected more out of this year’s team, especially after another blazing non-conference start. As I mentioned in my previous post on Illini basketball, it’s time to look ahead to the future of Illinois basketball. Kendrick Nunn could potentially be a starter for the next three years, so there’s plenty of reason to be thrilled with his performance thus far. It’s hard to take any concrete conclusions from this data—it’s still just three games, and he didn't play all that well against the tough Ohio St. defense—but I'm optimistic there will be good news when we revisit these statistics at the end of the season.
Everything we've seen from Kendrick Nunn thus far has been pretty darn encouraging.