Share All sharing options for: Nebraska 67, Illinois 58: Whatever, I Guess

First off, we aren't good. Did anyone have fun tonight? Did you have fun watching? I should have knitted a scarf or baked a pie. I should have used that time to create a product, instead of spending it lifeless and droopy-eyed, watching whatever the hell that game was.

Goodness gracious, this team doesn't have a bit of character. We take every aspect of basketball and sand it down with a lack of talent until that aspect is a dull, round point. Then we poke you with it. It doesn't hurt, and it doesn't feel good. It only feels. It's just enough interaction to keep us engaged and distracted. We don't understand our own lobotomy.

I'd say that words don't do this team justice, but it's really the other way around. Words make them sound interesting, or compelling, or controversial. They aren't. Illinois is horrible on offense and pretty bad on defense, and that's it.

This picture should get the point across. 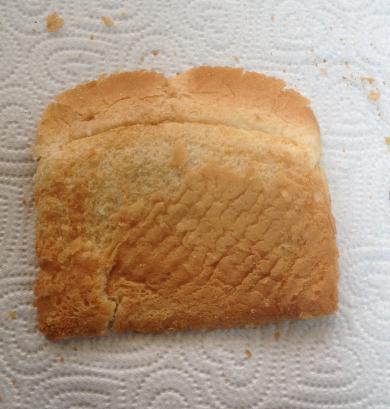 That's the end piece of a shitty loaf of bread on a paper towel. No one's gearing up over that shitty thing, and no one eats it either. You could use it as a hot dog bun if you run out, I guess. It'll leave a trail of flakes and crumbs and you won't enjoy a bite of that thing, but yeah, sure, keep it around. Keep tuning in.

Rayvonte Rice scored 23 points and was the only Illinois player in double-digits. He played alright, but he's no hero. Nebraska outmatched the Illini on offense, defense, and energy. That team has character. You could feel their momentum build through their play and through their huddles and through the activity on their bench. It manifested itself, as did our nothingness.

- Illinois is again last place in the Big Ten.

- What button simulates the rest of this season? X? Press X.