Game information for the Illinois' Big Ten/ACC Challenge matchup against the Miami Hurricanes.

If you buy something from an SB Nation link, Vox Media may earn a commission. See our ethics statement.

Opposing SB Nation Blog: State of The U

Coming off a Las Vegas Invitational title and an impressive win over Baylor, the Illinois Fighting Illini are on the road yet again to face off against the Miami Hurricanes. The two programs are pitted against each other in the annual Big Ten/ACC Challenge.

Rayvonte Rice and the Illini backcourt hit their first road block against the Bears, but the team is still 5th in the nation in scoring at 90.0 points per game. The theme of offensive balance has continued for Illinois as Rice, Malcolm Hill, Aaron Cosby, Kendrick Nunn, Ahmad Starks, and Leron Black are all averaging at least 9.0 points per game.

Miami is also led by led by an outstanding backcourt that consists of Angel Rodriguez, Sheldon McClellan, and Manu Lecomte; combined, the trio is averaging nearly 43.0 points per game. As a team, the Hurricanes are shooting 50.4% on the year as well as 45.7% from three-point range.

Illinois and Miami last faced off in the second round of the 2013 NCAA Tournament, the #2 seed Hurricanes defeated the #7 seed Illini 63-59 on their way to a Sweet Sixteen appearance.

At 6-0, the Fighting Illini enter this game ranked #24 in the Associated Press Top 25 and #25 in the USA Today Coaches Poll. Tuesday night's matchup will be a battle of undefeated, ranked teams as Miami (7-0) is currently #15 in both polls.

Illinois is averaging 70.5 possessions per game--that puts them at 37th in the nation for this category. On the flip side, the Hurricanes are getting the ball 64.0 times each night (253rd). Average possession times are 15.4 and 18.9 seconds for Illinois and Miami respectively.

Both teams typically use a 4-guard lineup so this difference in tempo is a bit perplexing. Look for the game's pace to be a bit similar to the Baylor game; The Illini will do all they can to push the ball while Miami takes some time to initiate an offense.

Illinois' offensive turnover percentage of 12.3% is currently 3rd best in the nation--that's extremely impressive given how they're trying to push the ball. Ahmad Starks leads the Big Ten in assist/turnover ratio at 7.0 and Jaylon Tate is also doing a phenomenal job as he has 20 assists and 6 turnovers on the year. The Hurricanes' oTO% of 16.7 (37th) also indicates that they're doing a great job of maintaining possession of the ball.

However the big difference between the two teams' play is their defensive turnover percentage. The Illini are forcing turnovers on 22.9% of opposing team's possessions, that's 60th in the nation. Miami's dTO% on the other hand is 18.5% (243rd). Illinois is causing more pressure on the defensive end and it could potentially lead to a few more possessions Tuesday night--that could have a huge impact on the game's outcome.

In total, there are five returning players from the 2013 NCAA Tournament game between these the two schools. Miami's Tony Jekiri is the lone player on the opposing side; The 7' Center is off to a nice start as he's averaging 8.3 points and 10.9 rebounds per game. For Illinois, Nnanna Egwu, Tracy Abrams, Rayvonte Rice, and Mike LaTulip were all in attendance a few years ago. Egwu is obviously the only player who participated in that contest since Abrams is out for the year. So although the Illinois fan base may deem this a "revenge game", the odds of there being much ill-will out on the court seem pretty slim. 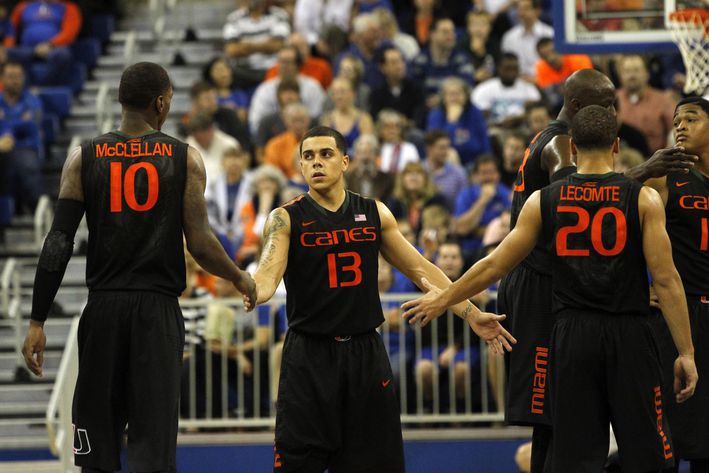 Q&A with State of The U

Kansas State transfer Angel Rodriguez has been one of the best Point Guards in the country so far; he's a fierce competitor that does everything well on the basketball court. He's an above average shooter and he does a nice job of getting his teammates involved when he drives to the hoop. In Miami's upset at (then) #8 Florida, Rodriguez went off for 24 points, 3 assists, and 3 steals on 7/14 shooting. Oh, and he also hit the game-winning shot.

It'll be interesting to see who Groce selects to guard him. Look for Ahmad Starks and Aaron Cosby to share most of that responsibility; that'll leave Rayvonte Rice and Kendrick Nunn guarding Sheldon McClellan.

Both Illinois and Miami have outstanding backcourts, so naturally it'll come down to the big guys. More specifically, the production, or lack thereof, from Malcolm Hill and Leron Black could determine the game. Here's how I view the position battles between the two teams:

No matter how you slice it both backcourts will get their fair share of points on Tuesday night, but the winning team will most likely receive some nice contributions from down low. Illinois will be in a great position if Hill and Black could put up 20-25 points and 15 rebounds between them.

If this game goes how everyone expects it to, it'll be close. Illinois is one of the better free-throw shooting teams in the country (76.6%), but it seems like they've had some real inopportune misses so far. Miami is also respectable in this category as they shoot 73.8% as a team.

Free throw shooting shouldn't just apply to the end of the game, either. Attacking the basket, drawing some quick fouls, making free throws, and taking the crowd out of it early on could go a long way.

Here's what I had to say in a Q&A with State of The U:

I have to be honest with you, I thought this would be an easy W when the match-ups were announced this Summer; I had no idea the Hurricanes would be this good and this game could realistically go either way. The two teams each have great guard play so I'm hesitant to give either side an edge in that aspect. I do however think that Illinois' front court of Hill, Black, Egwu, and Austin Colbert/Maverick Morgan is marginally better; they just need to stay out of foul trouble. I think the Illini will find a way to win in the end despite this being the team's first "true road game."