My path to the United Center press box.

Share All sharing options for: View From the Madhouse Part 2: Lil' U-God Infiltrates the Press Box

I had wanted to apply for a press pass for the Oregon game for a while. I live in the city so the game at the UC was one of the few basketball games I attended per year. A week before the season began I decided I should apply. While looking over the games I realized the first game of the year, Georgia Southern, was the night before the Iowa game. So I decided to apply for that one too.

Of course I did it wrong the first time. But then on the second try I got the confirmation email that it worked. And then a day later I got an approval email. I was going to be covering the Illini for the Georgia Southern and Oregon games! Since I had gotten approved so quickly I said "why not" and applied for press passes for the Iowa football game. And a day later I had them. What a weekend that would be!

I got my press pass at State Farm Center and then I just walked down into the media room. Everyone was being very nice and showing me where to go. I even got free popcorn. Once I got down to the media room I no longer knew what to do. I walked down what I thought was the stairs to press row. Well turns out it was the locker rooms and entrance to the court. And then I ran into security guards who started asking me how I got this press pass. This made me nervous. So I walked back up the stairs. I then realized there was a much simpler way to get down to press row. All you had to do was walk down the aisles and if you had a media pass they just let you keep going.

All the ushers were very nice and told me where to go. I got down there and I was pretty close to all the players and everything. Personally I didn't really like the angle. I was right in the middle and I was smaller than anyone on press row so I couldn't see very well. I figured it would be a nice blowout.

Also in my first ever game was the Orange Hush. It was really quiet for longer than it should have been and then everyone erupted. I could no longer hear myself type. Georgia Southern kept the game tight and I believe it was tied at halftime.

We ended up winning by nine but it was the most nerve-racking win so far. I went back down to the media room to hear Coach Groce's press conference. The Georgia Southern coach talked for maybe a minute. He waited for everyone's question. When Coach Groce came in he just started talking. His lasted much longer and gave us better insight.

For football I got my pass and was able to go right up to the box with the press elevator I liked the box a lot better and they had really good food in there. TCR actually had two press passes for some reason but I was the only one there. Here was my view:

And then yesterday I got to return to the press box. This is where my story links with Mark's. I too got to go in the special half gate (3 1/2). My dad took me in there and I had to tell them the pass was for me, not him. They told me "walk in and take the first right". There were big concrete steps and a big red door behind them. I walked down the stairs and went through the door and the night began. I started following a guy who looked like he knew what he was doing. There was a confusing sign so I had to ask a security guard and asked him if I kept going that way.

So I kept going right. I walked by the Hawks locker rooms and I was walking for a really long time. Then Rayvonte Rice walked out of the team locker room to go warmup. He's really big if you didn't already know. I realized I must be at least close if the court was close. Then I found the press lounge. It was only about 4:30 so I didn't get any food to eat. I picked up a program for each team. I looked over a sheet that said "Press Row Seating" and I didn't find Champaign Room so I figured I was up in the box. I found a sign that said press elevator and went in it. The usher asked "Press Box?" and I said: "Yes, wherever that is". He took me right up and I was in the box. The lounge may have been eight floors away from the box but at least there was an elevator right there. This is how I watched the game:

(Something is messed up, I promise I didn't take it upside down)

And my press pass:

I walked into the box and there was one other person there. One. I looked down on the floor and saw all the "big guns", Jeremy Werner, Shannon Ryan, Steve Greenberg to name a few, sitting down on press row. After getting all my stuff set up I went back down the elevator to see Jim and my dad who were conveniently sitting pretty close to each other. Jim and I talked about how we had to win this game (sigh). He was also pretty close to the Simeon players, Marcus LoVett, and Aaron Jordan. 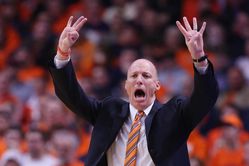 The Fighting Illini will be hanging their heads following the loss to unranked Oregon.

Then I went back up for the game. The United Center seemed to forget that there was a game going on as there were no stats on the monitors up in the press box or on the scoreboard. Also that soda machine Mark was talking about? Completely empty. No popcorn, Haagen-Dazs, or soda for the five (literally five people) of us up in the press box. It was a solid first fifteen minutes and pretty much everything else was bad for the rest of the game.

I went down to the press lounge again after the disappointing loss. Everyone waited around for a little bit before the Oregon coach, Dana Altman, and freshman Dillon Brooks came. They were all happy and said it was the best they had played all year.

Then we had to wait for a while as Coach Groce was probably giving a long speech to the players. In between this I met a guy who used to write for InsideNU, Northwestern's blog at SBNation. He noticed that I wrote for the Champaign Room. He is now an AP Writer. Also I saw a guy from BTPowerhouse, the B1G Basketball site. SBNation everywhere!

They all seemed very sad and deflated. Coach Groce specifically talked about what they need to do to get better. After he was done it was the end of the night.

It was a really awesome experience for me. I'm hoping (and expect) I will be able to do it more in the future and grow our site. I would like to thank Kent Brown and the rest of his staff for allowing me to use the pass and also everyone here at TCR.