Morning Brew: I Gotta Talk (Again) About How Dee Brown Is Better Than Devin Harris

Share All sharing options for: Morning Brew: I Gotta Talk (Again) About How Dee Brown Is Better Than Devin Harris

The Brew has a high heart rate and a shaky hand because The Brew has haters, as does Mr. Dee Brown.

My original post, which ignored Dee as the face of the B1G (it didn't ignore that at all) and only discussed the debate through statistics, wins, and accolades, came to a breaking point yesterday, as a whole bunch of Badger kissers think a whole lot of Badger loving thoughts.

Here's the original post. Look at it, view the statistics, look at the bullet points. Think of your favorite mid-2000s Big Ten memories and think of the two players at hand.

Dee Brown--what a stud. He led the best team the Big Ten has seen in years. He rocked it with a head band and swagger, an attitude only a stud could carry, and you watched it and nodded the whole time, thinking, "That kid can ball."

Then there's Devin Harris, who played for Wisconsin, and...that's it. He played. He was good, and he played. Hell, he was great and he played, but all he did was play and all he didn't do was make Final Fours.

"But Dee Brown did that with Deron Williams and Luther Head" you Badger bastards say, crying, remembering your heartbreak. To give the opposing argument full credence, here are the counter tweets, via @hoopsmarinara of Bucky's Fifth Quarter:

1. Lots of talk about TEAM success, but Devin Harris had 3-2 edge in H2H matchups with Dee Brown. @Champaign_Room

NOTE: This refers to Dee Brown's freshman and sophomore year versus Devin Harris' final two years. It's only a valid point if you include the seasons where DEE IS A BALLER, but, alas, you do not.

2. Brown had 2 NBAers beside him in Williams & Head. Harris didn't do it alone, but had ... Freddie Owens & Boo Wade. @Champaign_Room

I will preface this by saying that the names "Freddie Owens" and "Boo Wade" have never been more hilariously introduced.

Dee Brown's senior year included James Augustine--a star, yes--but that's it. That's it. No Deron Williams, no Luther Head, no Roger Powell, no NBAers. And he still managed a 26-7 record.

What record did Devin Harris manage, you ask? 25-7. GTFO.

3. Could Brown have been won #B1G POY if Devin was still in conference? We do know Harris was POY when Brown was in the league. 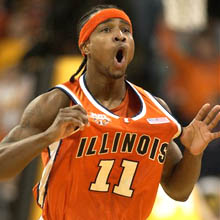 Devin Harris? Soft ass. Soft as can be, as evident by being soft. Circular argument, you say? Well, GTFO. Dee for Three.

Devin Harris had one great season, one season before the Illini hit their stride. And despite his incredible talent--a point I concede--Wisconsin still couldn't make it past the second round of the NCAA tournament. Judge Dee Brown, however you wish, but if your memory is in anyway different than the picture shown above or the gif shown below, then what kind of melancholy life were you living? His face is the 2005 Fighting Illini. Devin Harris' face ain't shit.