Illinois vs. Wisconsin Preview: Let's Hope They Don't Shoot Us Out of The Gym

The Badgers have six players that shoot over 35 percent from 3-point range. My goodness.

Share All sharing options for: Illinois vs. Wisconsin Preview: Let's Hope They Don't Shoot Us Out of The Gym

Fine, that's your opinion. My take: Bo Ryan is a treasure and he runs the best program in the nation as far as output is concerned. It became a good-natured joke years ago to predict when Bo would finally have a down year. This year, Michigan State head coach Tom Izzo predicted at least 25 wins from the Badgers without even taking a look at the Wisconsin roster.

In terms of rebooting after lost production from the previous season, I don't know if Bo's done a better coaching job than this season. He lost three frontcourt starters, over 60 percent of the rebounding production, a big chunk of scoring and loads of Big Ten experience in the likes of Jared Berggren, Mike Bruesewitz and Ryan Evans.

And lo and behold, Wisconsin sits at 15-0 with the No. 4 ranking in the nation midway through the season. Getting John Gasser back after he sat out the 2012-2013 year with injury helps. The other thing (particularly for a team predicated on good 3-pt. shooting)-- six players out of Wisconsin's eight-man rotation shoot over 35 percent from 3-point range.

In order, here's how those percentages rank: Frank Kaminsky (46.3%), Ben Brust (43.8%), Josh Gasser (40.5%), Traevon Jackson (37.1%), Duje Dukan (37%), and Sam Dekker (35.3%). That's the genius of Bo Ryan. In a year when hand-checking rules are being enforced to ostensibly limit the effectiveness of a Wisconsin, he trots out an offense that can be a juggernaut of efficiency (12th in the nation, according to KenPom, only six spots behind Oregon for the best Illinois has faced this year).

The bulk of that offense derives from the prowess of Brust, Dekker, and Kaminsky. Jackson will amass an annoying 10 points in ludicrous fashion, but he's very containable. Gasser's a guy you have to keep an eye on while he's lurking on the perimeter, but he attempts few field goals in comparison to the first three.

Brust is a high volume 3-point shooter: he's made 60 field goals this season and 42 of those were 3-pointers. He's had more catch-and-shoot opportunities with Gasser's return, and his 3-point shooting percentage reflects that. Illini defenders who draw the Brust assignment can't get lost in Wisconsin's offensive web or they risk leaving the dangerous marksman wide open.

You've probably heard tell of Kaminsky's 43-point game earlier this season. That has inflated his points per game number a bit, but he's still a very polished offensive player. Kaminsky has a great shooting stroke and his post game is far superior to, say, Nnanna Egwu. Nnanna might be able to give him fits if he ventures into the post, but I'm not thrilled about the idea of Nnanna chasing Kaminsky around the perimeter for huge chunks of this game.

And then there's Dekker, a guy Illinois head coach John Groce compared to his own stud, Rayvonte Rice, in terms of his utility and versatility on offense. Much like Rayvonte, who uses his mass bulk to shrug off defenders, Dekker uses his 6-foot-7 size to manufacture good looks for himself around the hoop. He's also an excellent rebounder, both on offense and defense, which cedes him even better field goal attempts. More and more his game reminds me of Gordon Hayward, and the Big Ten should be so lucky if he jumps to the league early (doubtful). I like that Ekey will draw this matchup, but there's no sweat in giving up 15 points from Dekker.

Now, you may ask how Wisconsin operates so efficiently on offense when they milk the shot clock on most possessions. It's purely based on the defense getting tired at the end of a possession and slipping up, allowing an open look for a Badgers player. Bo figures if he makes you play defense for 30 seconds each possession, you'll be prone to making at least one mistake eventually.

Take this series of stills from Wisconsin's last game against Iowa. As you'll note in the first image, Traevon Jackson finds himself in a familiar situation, "Ah, hello old friend, the end of the shot clock." The offense needs to grind something out soon. 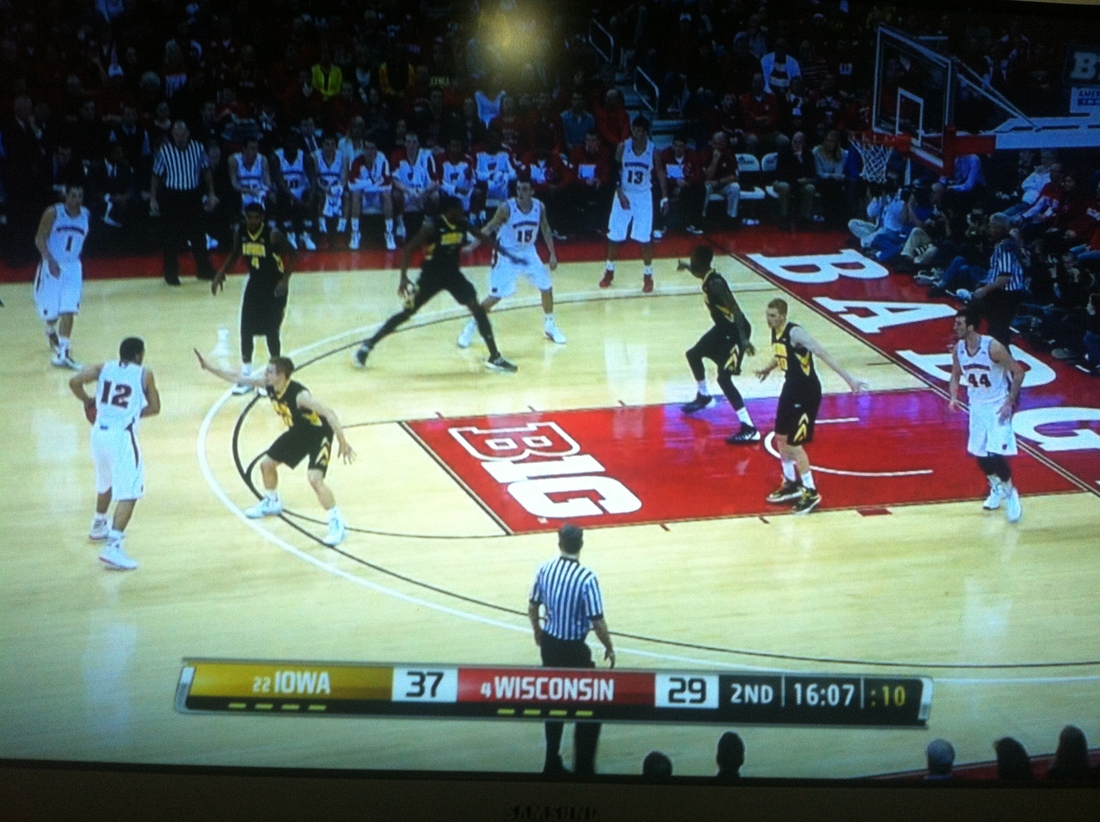 Kaminsky runs to the right wing and takes the pass from Jackson. Like any good Wisconsin player, he immediately shot fakes. Iowa's Aaron White, a good defender in his own right, gaffes this time and bites at the fake. 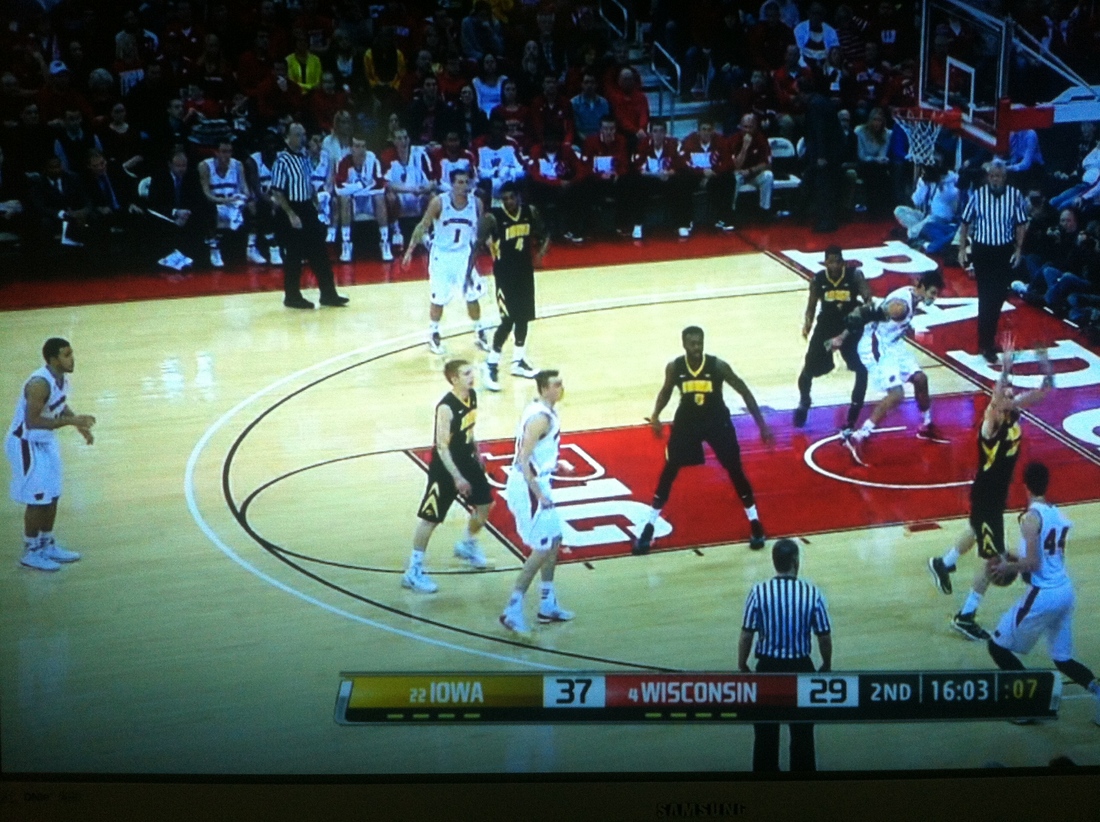 White sails right past Kaminsky, who takes a step forward within the arc. He could probably get off a shot here, but the oncoming Iowa defender is close, so he dishes to Dekker on his left. 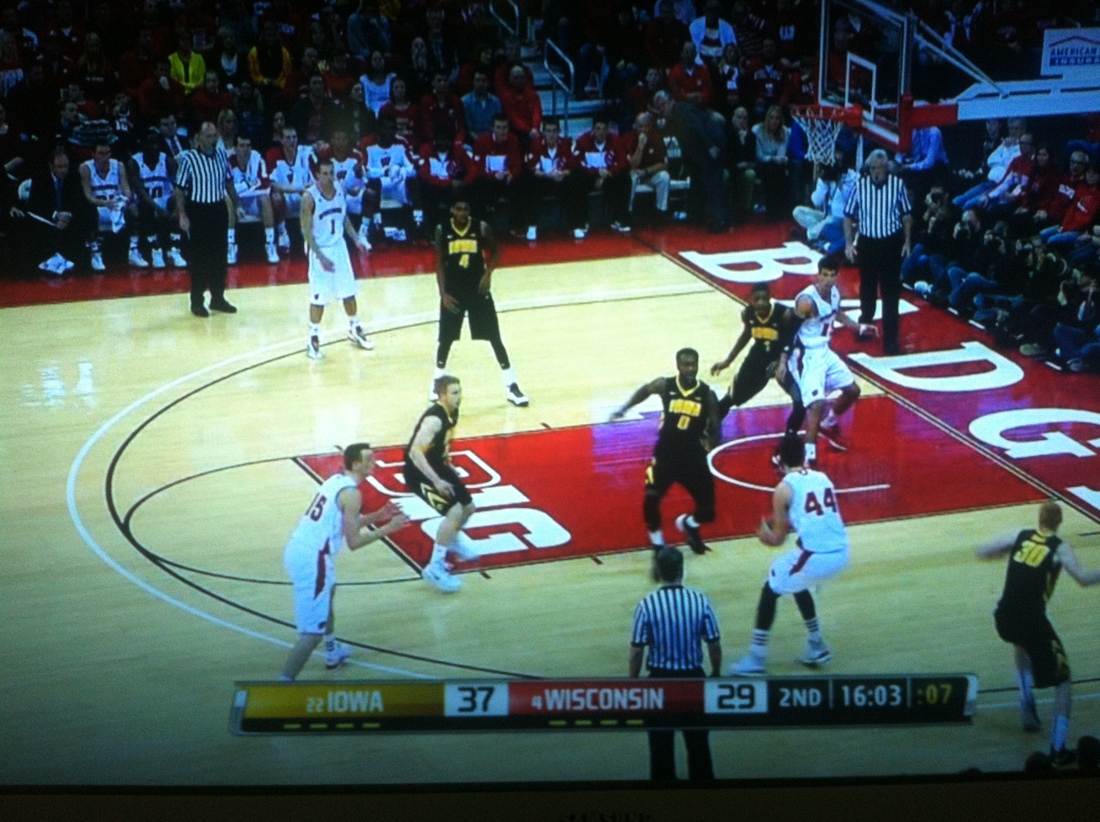 Dekker, who's covered, swiftly swings the ball back to Jackson on his left. Jackson theoretically could shoot it, but Roy Devyn Marble has made up his mind to close out on Jackson, and the best shooter on the team stands to his left uncovered. 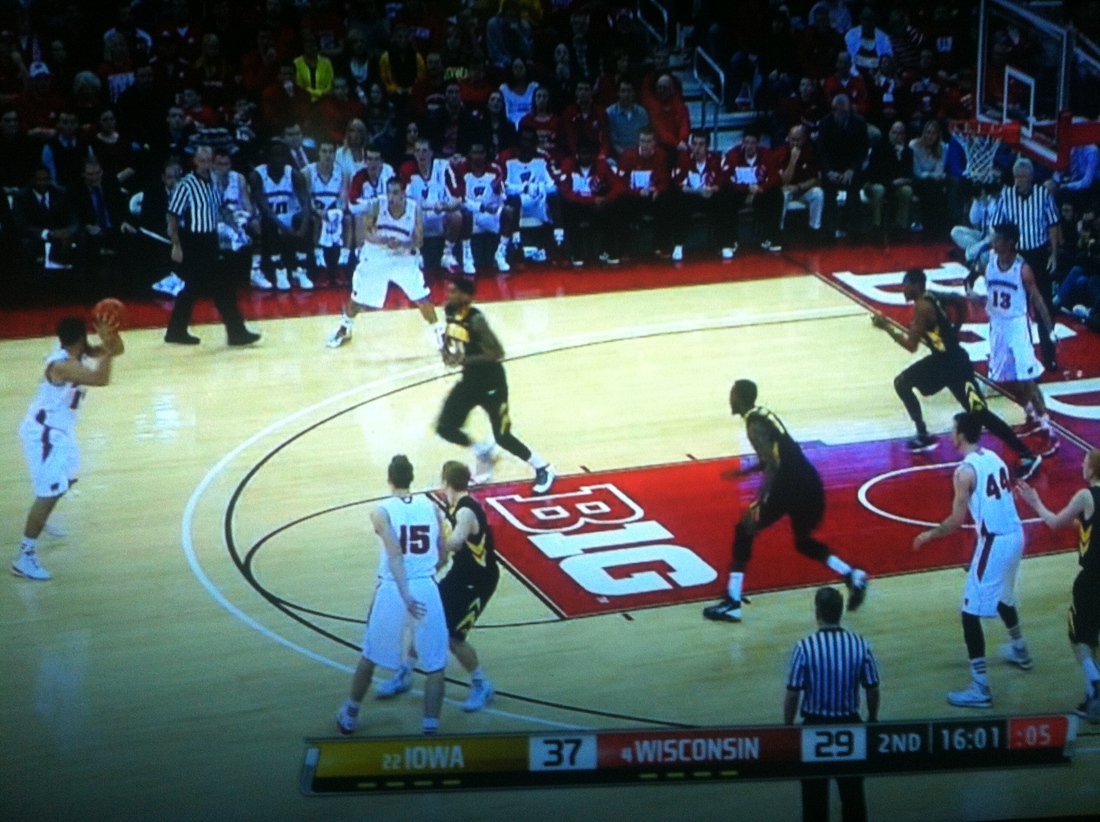 And just like that, Ben Brust, the best shooter on the team, has a wide open 3-point look with four seconds left on the shot clock (not pictured here: Brust looked up at the clock just to make sure how much time he had to let the shot fly). Of course, Brust buries the 3-pointer. 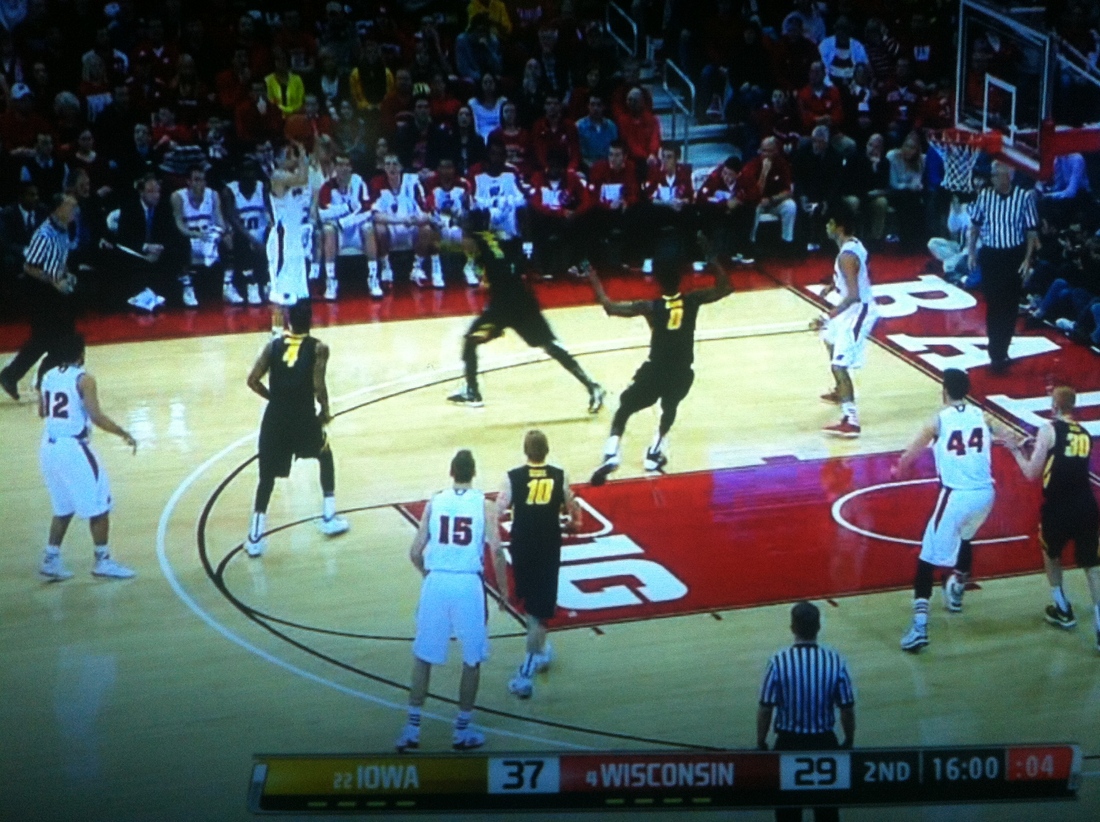 Sequences like these will have me watching exactly whether Groce will tighten up his bench rotation or not. Illinois' starting five are extremely sound defenders who are not likely to yield to these types of Wisconsin fakes all that often. There's a huge dropoff in that defensive discipline when bench players not named Kendrick Nunn hit the floor. Wisconsin famously preys on inexperienced defenders, and they could have a field day if the bench has to log a lot of minutes.

You'll hear the announcers Wednesday night mention how much (relative) success Illinois has had at the Kohl Center during Bo's tenure. But none of Bruce Weber's magic juju will be available for this game, and Wisconsin's every bit of an elite Big Ten team. The starting defense of Illinois will keep them in much of the game, and we'll see how far their late-game progress has come in the crunchtime against the Badgers.