Is Illinois The Worst Team In The Big Ten?

Share All sharing options for: Is Illinois The Worst Team In The Big Ten?

Illinois was in first place (tied) of the Big Ten at one point this season. That's not something we should ever forget. Those few days were like candy, and I devoured them in huge gulps. Now I have an ulcer and the program has a hemorrhage. Such substanceless consumption isn't good for one's health.

Lesson: A few sweet days does not make a season. A few months do, and Illinois doesn't do well in periods that long. Just this past month, the Illini dropped six straight and fell to 11th in the Big Ten. They aren't dead last because they beat the 12th placed team--Penn St.--after their best player, D.J. Newbill, was ejected. Last night, that same 12th place team beat the Ohio St. Buckeyes on the road in overtime thanks to that same best player, D.J. Newbill, hitting a last second jumper in overtime. Clearly, Newbill makes a difference, so the question must be asked: Is Illinois better than Penn St.?

Is Illinois better than anyone?

We'll start with the top layer so we can move on and get to the meat of this argument: Michigan St. and Michigan. The Spartans best the Illini in just about every category, except team defense, where they trail the Illini by about one point per game. They make up for it by scoring 12 more.

Michigan, by virtue of their undefeated conference record, also joins MSU in the top tier. The best argument for why Michigan is better than Illinois, and better than the whole B1G, maybe, is that Michigan has Nik Stauskas, who is the college Canadian Tracy McGrady. Is it a coincidence that T-Mac played a good portion of his career in Toronto, the city that houses Stauskas' hometown, Etobicoke? 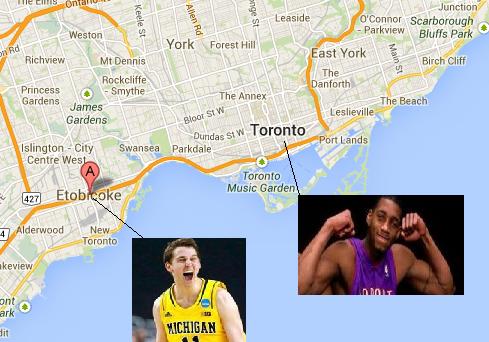 No, it's no coincidence. Don't believe the comparison now if you wish, but you'll shush up when N-Staus drops 50, scores 13 points in 33 seconds, and oops himself off the backboard. He'll go through his share of injury troubles, and his career will end with a sad stint on the Pistons, of course. But for now, he's shining bright. Try to enjoy it.

In the second tier is Wisconsin, Iowa, Minnesota, Ohio St. and Indiana. Of those five, Indiana comes in fifth, and if there were four tiers, Indiana would fall in the third one. But this is a three tier system. There are rules. Noah Vonleh and Yogi Ferrell are too good for the bottom tier.

Vonleh is a monster. Far too monstrous for our feeble team. All signs point to a lottery pick projection for Vonleh, which then points to his leaving the college ranks after this year. That'd be great for Illinois and terrible for Indiana, which makes it double-great for Illinois. The enemy of your enemy is your friend. Still, for 2014, Indiana bests the Illini.

Wisconsin hit a January skid, but they asserted their dominance over Illinois already this season. Ohio St. didn't dominate the Illini by any means. They met when each team was at their lowest, and the Buckeyes won. Never doubt Illinois' ability to out-low you.

Iowa is fantastic. They've lost five times, each time to another fantastic team (all five in the RPI top 15), and once they start winning those games, they may jump up a tier. Minnesota isn't quite as good, but currently, they're playing at a similar level (outside of their last defeat against Nebraska). Plus, it's Minnesota. No matter the sport or talent level, they'll pester Illinois to death. I couldn't stand the Gophers before they changed coaches, and now they have the spawn of Pitino and second generation slick hair.

Lastly, the third tier--the basement apartment of the Big Ten townhouse. The ceiling leaks quite a bit and there's not a damn bit of natural light in the whole unit. How's the rent, you ask? It's low. This is a low-talent apartment, and the hot water heater is broken. Northwestern, Purdue, Penn State, Nebraska and Illinois. These teams are taking cold showers.

I listed Northwestern first because they forced my hand. They won at Wisconsin on Wednesday night, and few teams do that. They now have four conference wins, a legitimately outstanding defense, a B1G coach of the year front runner, and an inexplicable ability to win games despite being awful. They also beat Illinois and that loss made me very, very unhappy.

This is a joke. A mean joke. A personal joke that hurts your feelings, and gets the whole Big Ten class to point and laugh, while you run away and never come back. We just called the teacher "Mom." We showed up to school naked.

Consider this my concession, you bastards. I may take it back later, so enjoy it while it's here.

Purdue beat Illinois at Illinois. We have similar overall records, but they take the edge both head-to-head and in conference. A.J. Hammons plays a man's game in the middle, and he's complimented by Terone Johnson and Ronnie Johnson. They aren't good, but they have the pieces--Hammons, mostly--to compete, and they may knock off some good teams this year.

Here's the real meat: Penn St. and Nebraska. I've set the precedent of giving head-to-head winners an edge, and that gives Illinois a rare belt notch in this argument. Illinois beat Penn St. earlier this month at State Farm Center by 20 points.

The trouble there is that Illinois only pulled away in that game after D.J. Newbill got ejected for punching Kendrick Nunn in the back of the head.

Had he stayed until the finish, who knows? Maybe he hits a buzzer beater on the road, just like he did Wednesday to beat Ohio State. Like I said, who knows?

Illinois was also kind of good then. It seems like an unhealthy opium dream now, but it's true. We were decent. The game versus Penn State took place in that brief, good period and thank goodness for it, because if it was scheduled for tomorrow, I'd be nervous. Penn State just won in Columbus. Those lions are hot.

Penn State also beat Nebraska, and Nebraska has spunk, I think. The Cornhuskers have two good conference wins--Ohio State and Minnesota--and although I'm fairly confident they aren't good, I love that damn Tim Miles. Always so happy and chipper, and everytime you catch a clip of his, whether it be on the Journey or BTN or otherwise, you can't help but love him a bit more. I have nothing more to say about Nebraska except that spunk will take you far in this world.

I firmly believe Penn St. would beat Illinois in a rematch tomorrow. And Penn State beat Nebraska. And Nebraska beat Minnesota. And Illinois hasn't won in a month.

That's how each team ranks against one another. Nebraska clearly stands above the other two basement dwellers, so they get an immediate verdict.

And again, we're left with Penn State. Just like we were left with Purdue to figure out the worst Big Ten football team in 2013, we'll be left with Nittany to determine the worst basketball team in 2014. And like football, I think we have the edge. But it's close. Too close. And for the purpose of sadness and resignation, Illinois can't quite get that final verdict.

PENN STATE: ABOUT THE SAME AS ILLINOIS