Bill Cubit delivered in his first year as the Illinois Offensive Coordinator.

Share All sharing options for: 2013 Illinois Football In Review: Offense

In a series of three posts over the next few weeks, I'll be grading the 2013 Illinois Football season. A mixture of important statistical measures and my own personal opinions, these posts will hopefully provide closure for another somewhat disappointing season as well as offer you hope for next year's team.

This first piece will go in-depth on the offensive successes and struggles for the Illini in 2013. Please keep in mind that the grades I give at the end will be entirely subjective. I certainly welcome your opinions (including disagreements) in the comments, but remember that these are just the views of one informed observer. My grades will also be based on the amount of success you would hope for from a team coming off a 2-10 season. Everything is relative, so I am not going to be judging the Illini with the expectations of an Ohio State fan.

The quarterback is almost certainly the most important position in an offense. Thus, I believe it's fair to first judge the success of the offense by looking at the performance of the quarterback. Fortunately, we have a good amount of data telling us how good a quarterback Nathan Scheelhaase has been in the past. By comparing numbers from this year to Nate's previous seasons playing for the Illini, the effect Bill Cubit has had on this offense becomes immediately clear.

A brief explanation of some of the slightly complicated stats here: Yards per Attempt (Abbreviated as YPA) is one of my favorite stats for evaluating a passing attack. It's calculated just as it sounds, with simple division, but it does a great job of showing how effective QBs are at moving the offense down the field. The TD/INT ratio was also calculated with simple division and is a quick way to show the efficiency of a quarterback. Interception rate, the final statistic I listed, is probably the one you're least likely to have seen in the past. It's simply INT divided by Attempts, and then multiplied by 100 to find out how often quarterbacks throw picks.

In Nate's case however, we find something very curious. Scheelhaase ranked 16th in the nation in total pass attempts with 430. Only two quarterbacks with more attempts than Nate finished with a higher completion percentage: Fresno State's Derek Carr (68.9 percent) and East Carolina's Shane Carden (70.5 percent). Basically, only two quarterbacks in the entire NCAA were more efficient than Nate Scheelhaase given his high volume of passes. That's not only incredible work by Nate; it's a testament to the efficiency of Bill Cubit's passing system. Nate was not without his tough games this year (Washington, Nebraska, MSU), but he was one of the most consistent players on the offense. That's something few would've expected from a guy with a career path resembling a roller coaster.

The other statistic I find important is the difference in Scheelhaase's YPA from the past few years. The Ghost of Nate Scheelhaase Past's YPA would've tied for 86th in the NCAA this year; a well below-average ranking. In Cubit's offense, however, Scheelhaase improved a full yard per attempt over his previous career average. He tied for 43rd in the NCAA this year in YPA. That's by no means a fantastic ranking, but Cubit's offense seemed designed to limit tough throws for Nate and focus on moving the ball down in short chunks. I personally loved the design, as the Illini didn't run the ball particularly well this year. A passing game that gets the ball out quickly is the best way to combat a bad running game and inconsistent offensive line. Given the style of offense, I would predict a relatively high completion percentage for Nate, and a relatively low YPA.

Cubit's passing offense (with the help of some personal development from Nate) greatly exceeded my expectations in both of those crucial areas. Illini fans should be really excited to see what a quarterback with a little more talent than Scheelhaase can do under Cubit's tutelage.

After a positive review of the passing offense, we depressingly arrive at a much less successful unit this year; the rushing offense. Illinois ranked 106th of 125 NCAA teams this year in rushing attempts. They also finished up the season at 4.06 yards per carry, ranking 82nd in the country. The Illini didn't run the ball very much this year, likely because they didn't run very well. Before officially counting the rushing offense as a major negative though, let's investigate a couple of non-statistical factors that could play into a successful run game.

I've long believed that the amount of experience on your offensive line is a good way to predict the amount of success you'll have, and may even be as important as the line's physical talent. Offensive linemen have to make more difficult physical and skill-based improvements to play college football than other positions, unlike running backs, who coaches can plug-and-play the best prospects and see immediate success. Lineman tend to take more time to develop and reach their potential than any other position.

Looking more in-depth at this, let's take the average years of experience for the starting offensive lines of the top ten teams in YPC and compare them to the Illini OL. (Five years corresponds to a Redshirt Senior, four years corresponds to a Senior as well as a Redshirt Junior, and so on down the line.) I'll also include the average Rivals star ranking for all of these linemen as they came out of high school, as it makes sense to evaluate the talent gap as well as the experience gap. Those will also be measured on a one to five scale. Finally, I'll tack on the combined averages for each team. 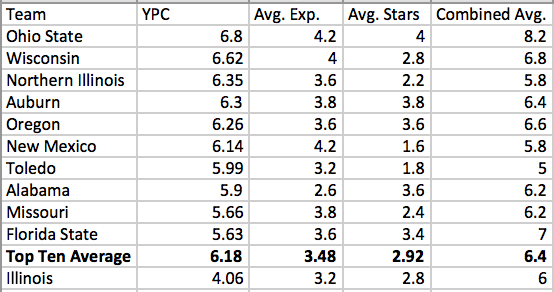 Whoo, boy. That's a whole lotta numbers, and they don't tell an entirely convincing story. First of all, note how all the non-BCS automatic qualifying teams have solid amounts of experience. They aren't massive amounts, but I doubt there's ever been a non-AQ team in the top ten that wasn't starting seniors and juniors on average. The average number of stars among those non-AQ teams is much lower than the average among the powerhouse programs surrounding them, and it seems they need at least a solid amount of experience to keep up.

Toledo is a very interesting case, as they have a much lower combined total than any other team, yet still place in the middle of the top ten. Part of this success could be due to their lower-ranked recruits facing similar competition in the MAC--an argument that may also apply to Northern Illinois and New Mexico's high YPCs. Although plenty of factors are impossible to account for in this quick analysis, it's clear that every team (minus one) is starting offensive linemen that have been with the program for three or four years on average. Alabama is the only exception, but they're Alabama, with a high average star ranking and top tier coaching. It may not be more important than talent or scheme, but experience appears as though it has an effect on rushing success.

Bringing this back to Illinois, you'll notice that they come in just a bit below average in both categories. This doesn't surprise me, but the difference between the Illinois YPC and the top ten's average is still far too large to be accounted for simply by a slight dip in offensive line skill level. Overall, the rushing offense probably should've been better this year, given the decent experience and skill of the offensive line.

On the bright side: Josh Ferguson ran 141 times this year for 779 yards, an average of 5.5 yards per carry. That's well above the average of the Illini as a team, as well as much better than the YPC of his teammate Donovonn Young (4.0). If Cubit gives a larger share of the carries to Josh Ferguson next year, the team average should increase and the running game should improve.

Lastly, should Aaron Bailey win the quarterback position battle with Wes Lunt, he will greatly improve the effectiveness of read option plays and likely rack up a large number of yards on his own. If both running backs improve in the offseason, I'd hope to see an increase in Illinois' numbers next year. They're losing a couple of starters on the line but the current players should continue to get better as they age and better learn Cubit's necessary blocking schemes. Even a relatively average 4.4 YPC would be excellent when paired with Cubit's great passing attack, and that's what I believe the Illini should shoot for as a minimum next year.

Looking at advanced statistics provided by Football Outsiders, the Illinois offense grades out a bit different than you'd expect after reading my analysis. If you want a quick explanation of how these stats are calculated, you should definitely check out their website. Illinois' offense placed 37th in the S+P rankings, a pretty good number for a team without all that much talent. For the record, I use S+P over FEI (the other advanced stat ranking system) for two reasons:

1. S+P rankings can be split up into the passing offense and the rushing offense, while FEI cannot.

2. The man who created S+P, Bill Connelly, both works for SBNation and is someone whose intelligence I trust.

I took a deeper look at the S+P offensive rankings, and that's where I found something really strange (to me, at least). Illinois' passing and rushing offense are both ranked 34th in the nation, the exact same. Neither advanced nor basic stats are an end-all-be-all, but they can work together to provide a clearer picture of what's really going on. Perhaps Josh Ferguson's personal yards-per-carry might help explain how the Illini rushed a great deal better according to S+P than their national YPC rank (again, 82nd) would indicate. I would've expected the passing offense to rank right around the 20s or 30s, and the rushing offense to rank somewhere in the 70s. Maybe it doesn't mean anything, but I found this development very interesting, and it made me a bit more confident in the ability of the Illini to run the ball with Cubit's offense.

In my opinion, Cubit did a very nice job with the Illini in his first year. Maybe last year's tire fire makes him seem like a godsend, but the numbers bear out that he is likely a pretty good offensive coordinator. Disappointing production on the ground and occasionally sub-par play-calls in the red zone simply aren't enough to bring down what was truly an excellent passing attack, relatively speaking. Time will tell if Bill Cubit is Illinois' OC of the future, but for now I deem his first year a success.