The Day After: When Expectations Change

Saturday's 45-17 win over Cincinnati wasn't just unexpected, but it may also have changed the way we need to look at this season.

Share All sharing options for: The Day After: When Expectations Change

You never want to overreact to what you see in the first week of the college football season, and now we know why. The Illini struggled to hold off Southern Illinois while Cincinnati steamrolled Purdue. Surely there was no way the Illini would be able to beat the Bearcats. Vegas only has Cincinnati as touchdown favorites? How stupid are they? 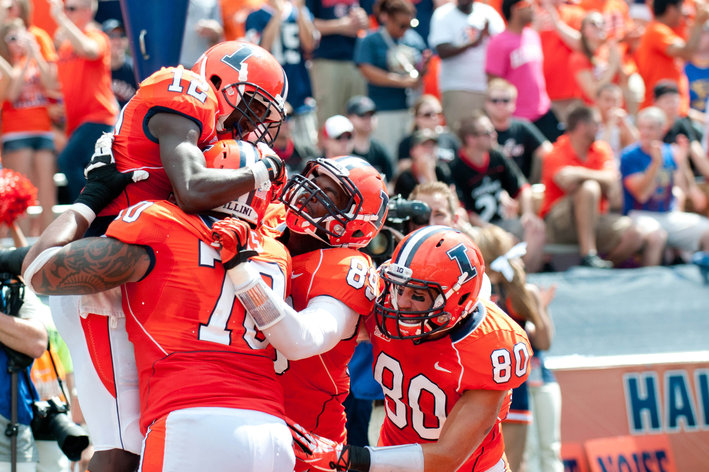 By and large we came into this season with the lowest of expectations. The most common refrain I heard was "wins won't matter nearly as much as this team competing." We were just hoping for two or three wins and a reason for optimism heading into 2014.

Well, we're two weeks into the season and the Illini already have those two wins. And that second win was impressive. That was a Cincinnati team that's won or shared the Big East title in four of the last five seasons. That was not a pushover.

But the Illini took care of the Bearcats with relative ease.

And it wasn't handed to them, either, as the Illini played well in all phases.

Bill Cubit's offense still looks like the stuff dreams are made of, as the Illini are spreading the ball around to everybody out of a multitude of formations. Through two games there have been eleven Illini to catch a pass, with at least ten different receivers catching passes in each of the first two games. That's hard for a defense to prepare for.

Donovonn Young finished with 64 yards on 14 carries, but 40 of those yards came on five carries during the Illini's final touchdown drive when the game was essentially over. So the running game still needs work -- particularly inside the tackles -- but at least Bill Cubit has figured out ways to get rushing yards when needed.

The passing attack? Well, we've already gone over that a bit. Efficient and effective. Nathan Scheelhaase had a great performance, throwing for 312 yards and four touchdowns. He looks well on his way to having a career season, which is everything we could have hoped for.

Also, did you notice how many sacks the Illini gave up yesterday? None. That may have been the most startling part of yesterday's performance. Nathan Scheelhaase remained upright. Sure, there were times when he scrambled out of the pocket and threw the ball away, but that's what we wanted to see him do.

The defense wasn't great, but it was playing a lot of "bend but don't break" defense. The Illini were dropping back into coverage a lot and giving Cincinnati shorter to intermediate routes just hoping the Bearcats would screw up along the way. Because of that Cincinnati averaged 6.2 yards per play on offense, so the bending was certainly there. However, the not breaking part was evident on third down where Cincinnati converted on only three of 13 third down attempts.

The Illini defense gave up yards, but it also got off the field.

On special teams there was a shanked punt -- Justin Duvernois averages about one a game -- but every other phase of special teams performed well. The Illini continued to get yards on punt returns which continued to blow my mind, and Taylor Zalewski had a perfect day.

Again, we shouldn't take anything we see before October too seriously, but it's hard not to let the mind wander.

Yesterday's game changed the question from "can the Illini win three games this season" to "is a bowl game out of the question?"

I don't know the answer to either question just yet, I just know that I'm thrilled that I can seriously ask the latter one.