Hey Illini football faithful. I'm Matt, a student at UIUC, and I'll hopefully be bringing you some football analysis throughout this football season. This is my first fanpost, so please go easy on me (though I welcome criticism and advice). What we have here is a picture-based breakdown of all eight of Donovonn Young's disappointing runs on Saturday against SIU. Eight carries for six yards and a TD is not exactly what the Illini and OC Bill Cubit are hoping to get out of their junior tailback, so I went to the tape to see whether this poor performance was his fault or that of the offensive linemen. My football knowledge is nothing spectacular, but through the writing of these pieces, comments from smart people like you, and generally watching games more closely, I hope to improve over the course of the season and basically become Chris Brown of Smart Football (but better looking) [please don’t hurt me] {I swear I love Chris Brown, I learned this all from him}. 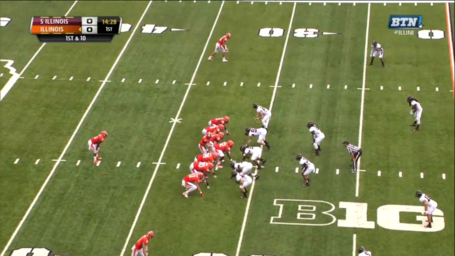 Playcall: I believe this is an outside zone, but I’m not entirely sure to be honest. 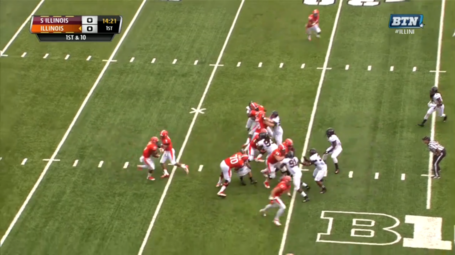 Immediately off the snap, right tackle Corey Lewis (#70) is pushed back a couple of yards by the outside linebacker but is able to force him inside, leaving Donovonn some room to cut outside. Right guard Michael Heitz (#74) gets a decent push after the snap on #91, SIU’s 3-4 DE. Following that initial push though, #91 does a quick move towards the sideline and Heitz is left behind. 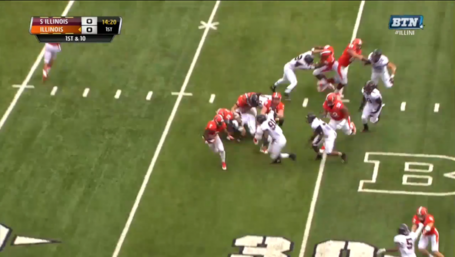 #91 forces Donovonn to cut even further outside, and at this point he’s surrounded by a few potential tacklers (#91 and #5, most notably). Ultimately there’s not much our hero can do at this point: he’s dead in the water. The first negative run of Donovonn’s day can largely be blamed on the offensive line and a good play by the opposing DE. 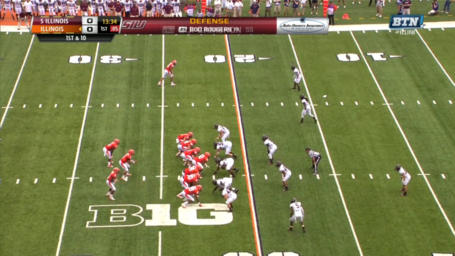 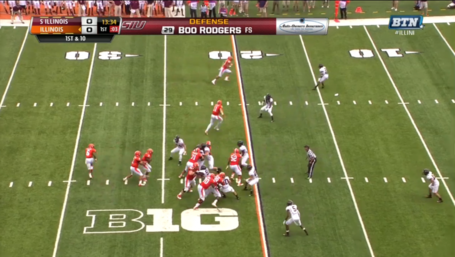 This play is quickly identified as an option because of the unblocked DE at the top of the offensive line. Scheelhaase reads the DE and observes that he is staying put, waiting for Nate to pull it and run left with Josh Ferguson on a speed option. Nate instead hands it off to Donovonn. For what it’s worth, I might’ve preferred to see Nate keep this ball and do a quick pitch to Ferguson out in space. While he made the correct read in handing it off in the absence of a crashing DE, Ferguson likely would’ve gone for a touchdown if thrown the ball with that much space. I digress. 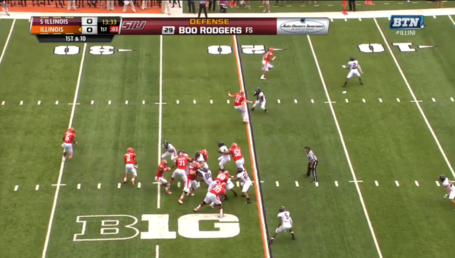 Once Donovonn has the ball, the blocking begins to take shape. Left guard Joe Spencer (#71) was pushed back two yards right into Donovonn’s grill. Young is forced to cut out to the right because of the poor blocking, but all he finds is RG Michael Heitz (#74, directly to the right of Spencer in the above picture). Donovonn once again finds himself pushed out beyond the hash marks. 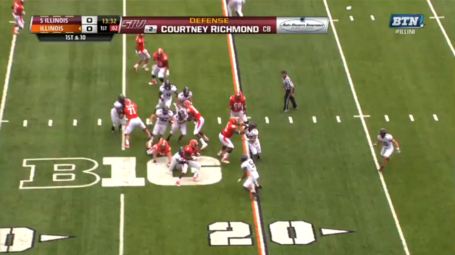 #91, who helped end the first play, once again pushes off Heitz and grabs Donovonn’s legs. It’s somewhat difficult to run with a 250+ lb man dragging you down, and our hero is stopped for a short gain. As with the first play, there’s not much Donovonn could have done here to make this better. The offensive line, specifically Heitz, just didn’t do a good job of giving him space to work with. It’s also worth briefly noting that TE Evan Wilson does a fantastic job of blocking on this play. 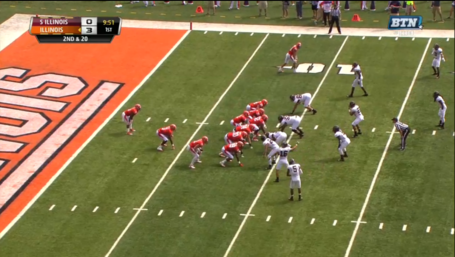 Formation: Strong I-form, twin TE to the right, Jon Davis (#3) in at FB 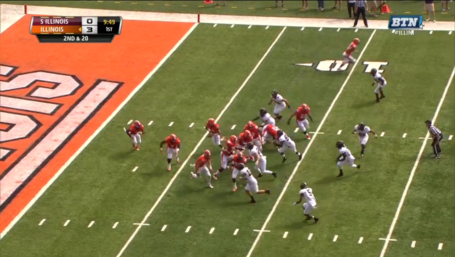 Doesn’t this look like it’s going to end well?! It does to me. Everyone appears to have moved decently well, and the Illini seem set up for a nice gain. But then… 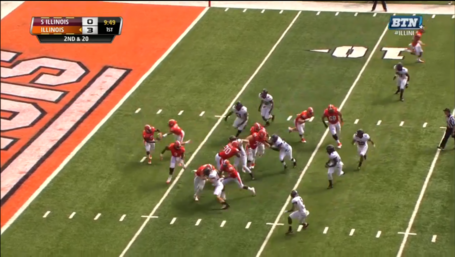 …DISASTER! Southern Illinois’ #15 blows right by Wilson (#89) and hits TE Matt LaCosse (#11). This quick hit catches LaCosse by surprise, and he’s pushed back a couple yards. #15 then continues to wreak havoc by spinning inside and preventing Donovonn from using any potential cutback lanes. Young bounces outside and finds... 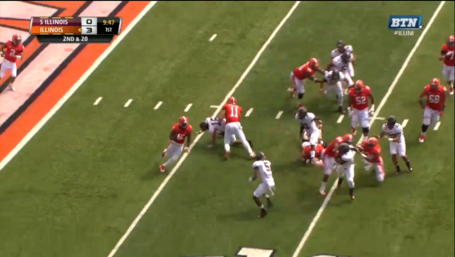 …a large barrel of sadness. SIU CB #5 (my naming system for SIU is basically an NCAA roster) is there once again to ruin Donovonn’s day. Donovonn elects to go full bowling ball, and runs into the guy. 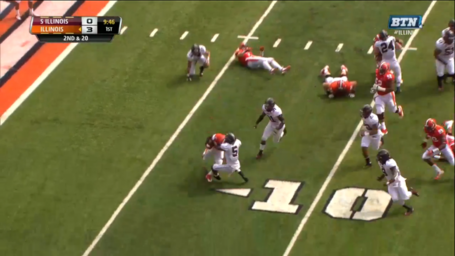 It’s worth noting that Michael Heitz is once again destroyed on this play by #91, who's hopefully named Debbie Downer. I have no intent of picking on Heitz (or any player, for that matter), but he’s had a few bad plays here. #91 cuts across the field and is there for insurance tackling. Three plays down, five to go, and none (thus far) can really be blamed on Donovonn Young. 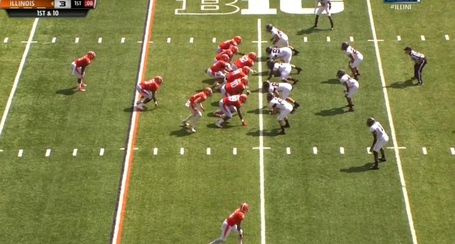 Formation: After a quick motion, same as the last play. Strong I-form, twin TE to the right, Jon Davis (#3) in at FB.

Playcall: Power O to the right 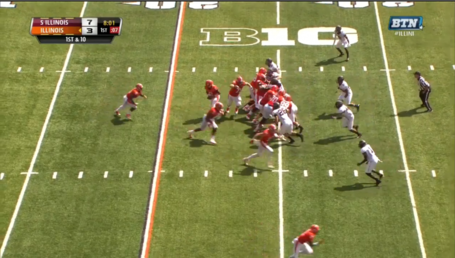 We know this play is "Power O" because of the pulling lineman, coming in from the left (LG Joe Spencer in this case). LT Corey Lewis and TE Evan Wilson double-up on a defensive lineman, leaving SIU LB #28 for the fullback, Jon Davis, to block. Unfortunately for the Illini, #28 is coming in hot on a blitz. He shoots inside before Davis can reach him. 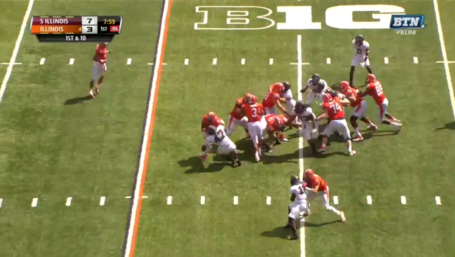 At this point, #28 is so far in the backfield that the play is already blown up. Both Davis and Spencer are forced to double #28, leaving SIU LB #47 to tackle Donovonn in the backfield. This play can probably be chalked up to bad luck and a good play call by SIU more than anything else. Donovonn had absolutely nowhere to go and the linemen actually did a decent job of setting up Spencer and Davis to lead block. If #28 doesn’t disrupt this play in the backfield, Donovonn may still be running three days later. 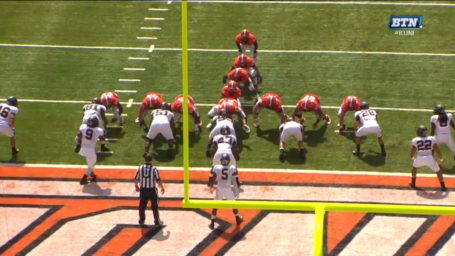 Playcall: Everybody just hit the guy in front of you and Donovonn will find a way in on the right side (or something like this, at least) 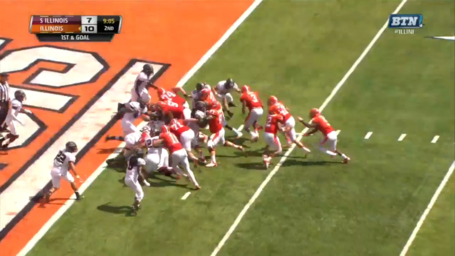 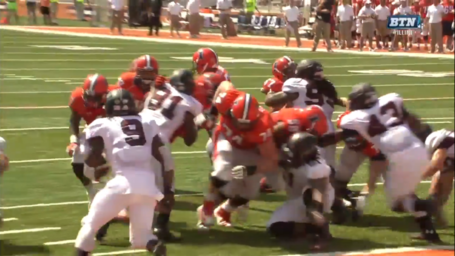 Sorry for the lack of good camera angles on this play. BTN didn’t get to the play before the ball was snapped, so I had to resort to random replays to find things to talk about, not that there's anything particularly exciting. Michael Heitz (#74) starts his brief redemption tour by pushing through the line and creating a nice little hole for the brigade that follows him. Clary and Davis do a good enough job of lead blocking, and Donovonn Young has his first happy moment of the day. 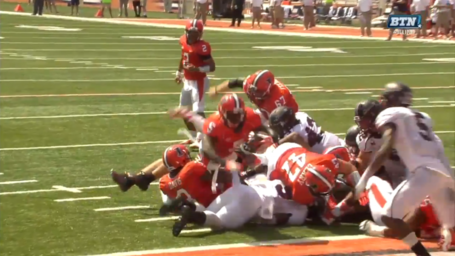 I think they should call this play "Superman over Dogpile of Large People". 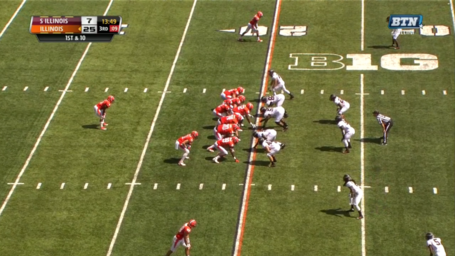 Formation: Single-back, twin TE on the right (Wilson on LOS, LaCosse off)

Playcall: Outside Zone again? Let me know if this is wrong please, I’d like to learn. 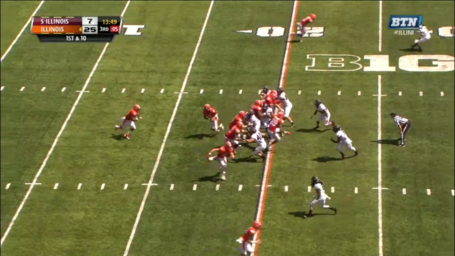 Left guard Joe Spencer and TE Evan Wilson are assigned to separately block the two middle linebackers of the 3-4 defensive front on this play. This ends horribly for the Illini, as you will see momentarily. 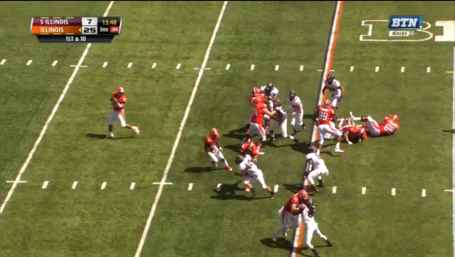 Yep, there it is. At this point, Wilson and Spencer actually chose to block the same linebacker, leaving the other, #9, completely free to plug the hole on the right side of the line. This appears to be Wilson’s fault: he begins on the right side of the line and goes after the left MLB immediately, when he should have stayed in his spot and taken out #9. If this happens as it should, Donovonn Young is, once again, still running three days later. Donovonn Young had a pretty unlucky day. Instead, Young is forced to cut outside by MLB #9, but that opening is sealed off by OLB #47. I would’ve preferred to see Donovonn just take #9 head-on in the hole for this play. He’s a North-South running back, and he would’ve had an okay chance of making #9 miss in space while running downhill for at least a yard or two. Instead, we have a loss of three. It’s hard to completely blame Donovonn Young though, as he must’ve been frustrated with the offensive line and himself at this point, and was likely looking to make a big play instead of getting a couple easy yards. 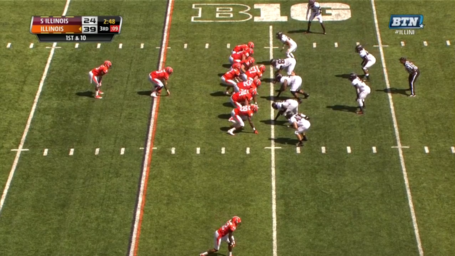 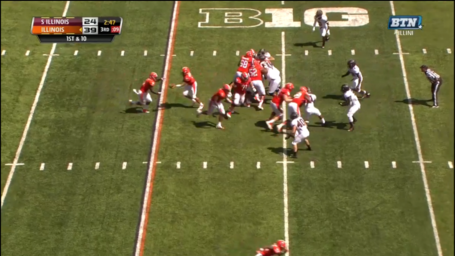 Now this is what it’s supposed to look like! TE Evan Wilson helps out the Michael Heitz Redemption Tour as the two combine to absolutely obliterate a poor SIU player. With this dude out of the way (and likely dead), the pulling guard (Joe Spencer, #71) and FB Jon Davis (#3) have nothing but scared linebackers and turf in front of them. Donovonn Young gets to run behind an unstoppable wall for the first time all day, and his eyes likely lit up at the opportunity. 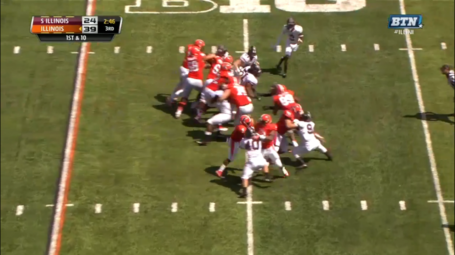 Seconds later, Spencer takes out #9 while Davis blocks #40. This creates a small, but acceptable hole for Donovonn to slide through and break into relatively open space. 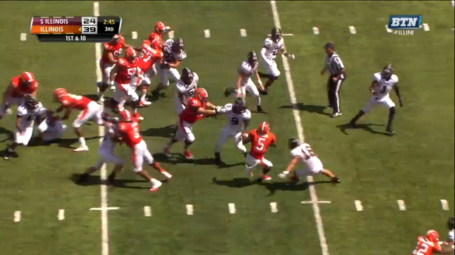 Feeling swagalicious with alla dat green (that just happened, I'm sorry), Donovonn puts #16 on skates with an awkward-looking, off-balance spin move to get three or four extra yards. That’s exactly the kind of thing you want to see from your feature back. Overall, this is about as well as the Illini executed a run play all game. Blocks were all solid, and Donovonn Young was able to finally take advantage of a little open space.

Play #8: Rush right for no gain 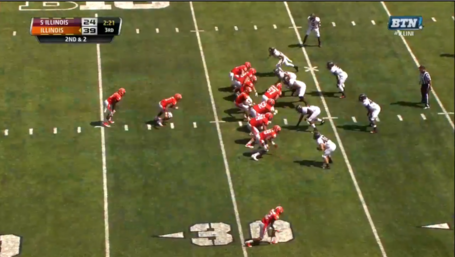 Playcall: Same as previous (Power O). The Illini just hurried to the line and ran the exact same play out of the same formation. 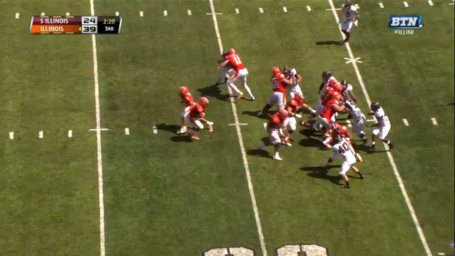 The initial blocking isn’t perfect, but it’s better than most plays were on Saturday. Spencer, who is pulling, and Davis are once again in pretty good position to lead the charge. 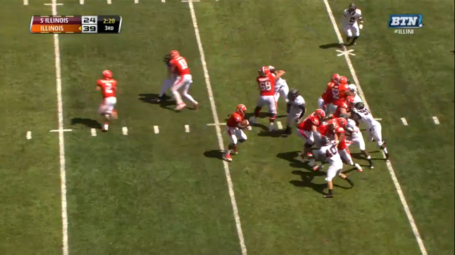 Unfortunately, that’s where the good things stop happening. When Spencer, the LG, pulls to the right, Center Jake Feldmeyer (#67) has to step into his gap and block the available defenders. Right guard Alex Hill (#52) also has to make the shift. Unfortunately, Hill is a bit late to helping Feldmeyer block the NT, thus Feldmeyer is unable to get out and block MLB #9. #9 shoots the gap quickly and runs down Donovonn Young in the backfield for no gain.

Conclusion: Ultimately, I believe we can conclusively say there isn’t really anything wrong with Donovonn Young. His stat line looks appalling in a box score, but it’s not exactly reflective of his potential in this offense. Cubit stopped going to him altogether after the third quarter, and the passing game was effective enough to get the win. Most of the badness surrounding these run plays was due to the offensive line missing an assignment or two. If the Illini can clean that up a bit, especially with Teddy Karras coming back soon, then Donovonn will likely be able to have more success throughout the rest of the year. This team will be bad, and the offensive line will be bad, but we don’t need to worry about Donovonn Young… yet, at least.

Wow, that was a lot of work. I apologize for not posting the videos for each of these plays, but I’ve already wasted 5 hours of potential homework time putting this together, so it needed to be finished (not that anyone cares about my personal life, I know). I also fully admit that I won’t be proofreading this closely at all, so I apologize for any grammatical errors or issues naming players. Thanks for reading these 2,000+ words if you did, it means a lot. Please comment with improvements I could make for next time (if a next time is possible and desired, that is)!

What should we be worried about regarding the run game?