We break down the play the Illini ran for Aaron Bailey's touchdown on Saturday.

I can't promise you that I'll be doing this every week because it takes some time, but in The FIlm Room I'll be breaking down plays from games that I found to be important or interesting. Now, after watching the game for a second time I found a whole lot of bad plays that I could have broken down.

So I decided that I'd break down Aaron Bailey's touchdown since Aaron Bailey is a player we're all obsessed with. So of course while I was breaking down the play I noticed that the Illini actually failed to execute most of it. Luckily, the lack of execution would not matter.

First we'll start by taking a look at the formation the Illini ran out of. 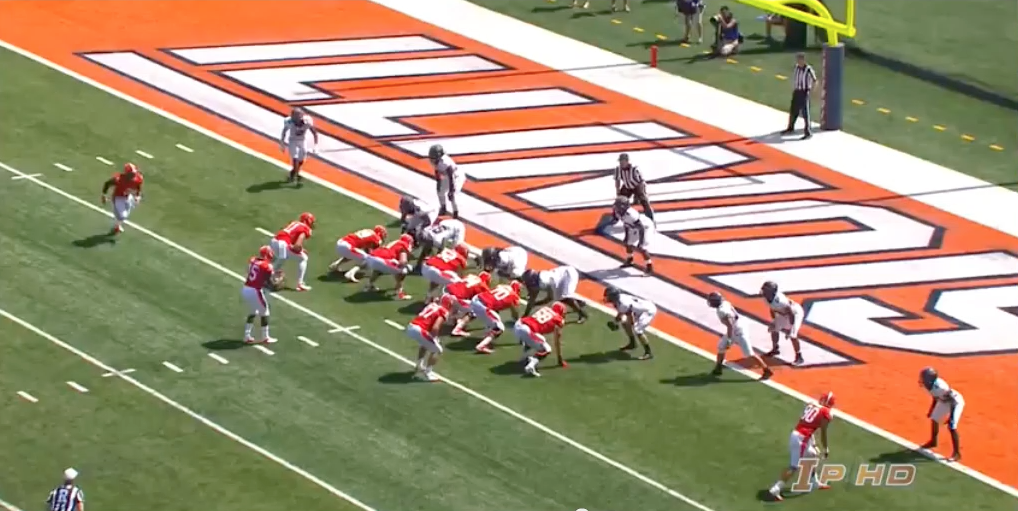 The Illini start with a six-man front with both Matt LaCosse and Tim Clary lined up behind the line with Aaron Bailey in the shotgun. Both Josh Ferguson and Spencer Harris are out wide. Some would call this a Wildcat formation, but the truth is it's basically a modified single wing.

Now, here's a diagram of what's supposed to happen. I promise my diagrams will get better in the future.

Well, Bailey doesn't really read that player, though he gets lucky in that the player follows Ferguson. Which is the first mistake the Illini overcome in this play. The next one?

How about the fact that the Saluki strongside backer (SAM) absolutely blows up Simon Cvijanovic (#68) and pushes him into the backfield and into Spencer as he comes pulling around. 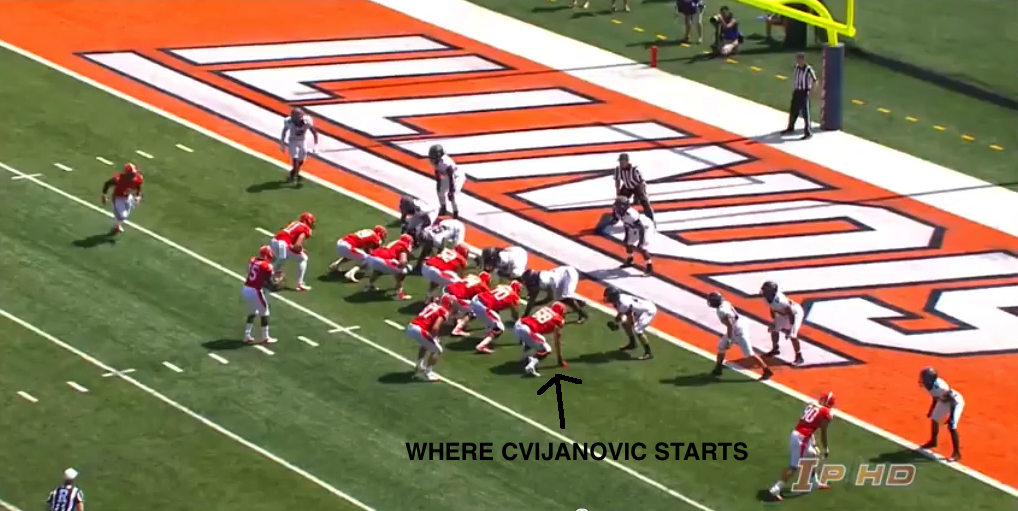 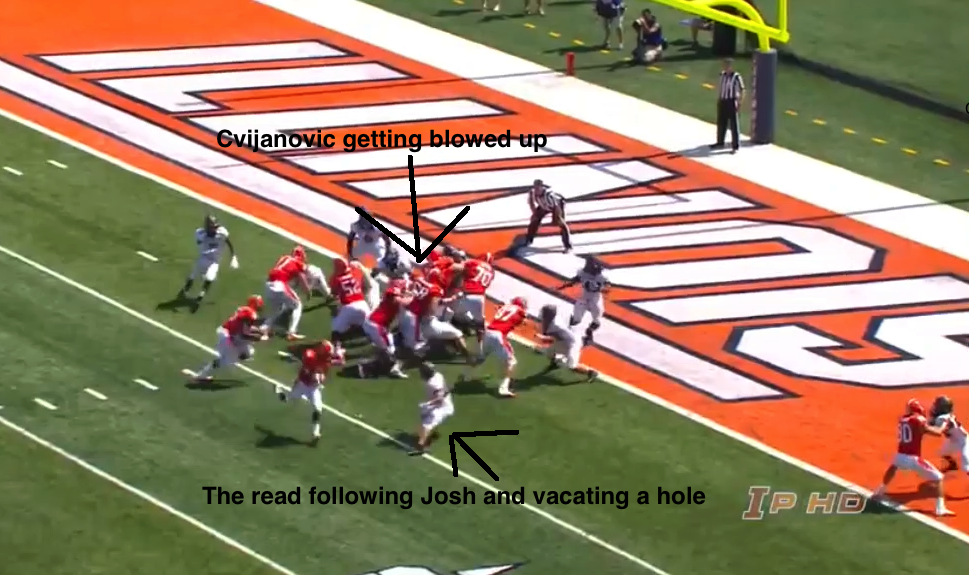 Now, even though Aaron did not wait to read the safety before keeping the ball -- I guess somebody just wanted that first touchdown -- the Illini catch a break. Even though Cvijanovic is getting blown off the ball and Spencer can't get out in front of Bailey, Aaron still has a big hole in front of him and he's one-on-one with the only unblocked Saluki linebacker (an unblocked linebacker that would have been blocked had Joseph Spencer been able to get to the hole).

Aaron Bailey is 6'2 and 220 pounds and is running downhill. That's a matchup he should win.

But guess what? Aaron doesn't have to win the matchup. Because that unblocked linebacker screws up too. 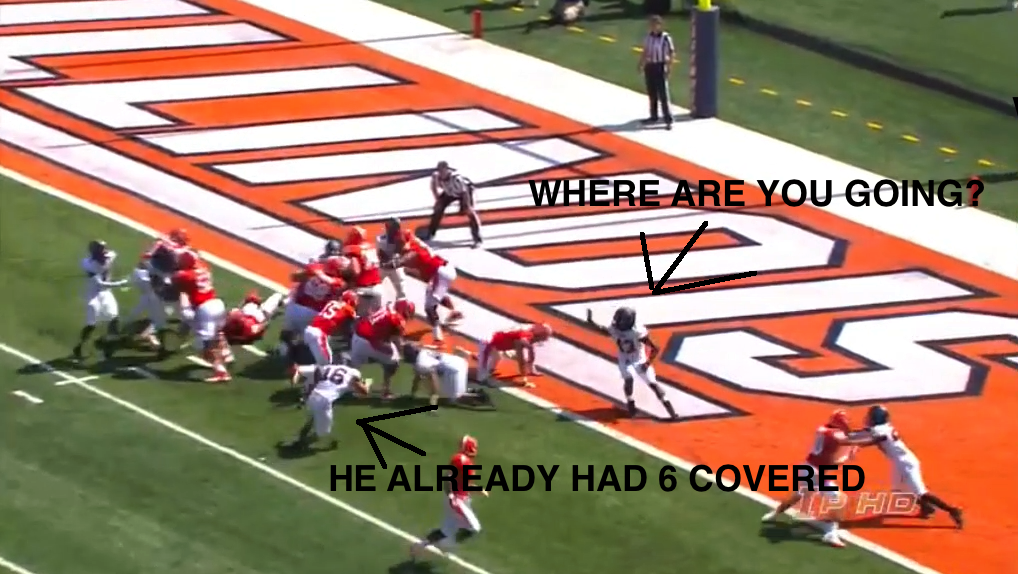 In that still you can see the Saluki linebacker is just realizing "oh shit the other guy has the ball." Confusion on the Salukis defense caused two of their defenders to go after Josh Ferguson and for nobody to cover Aaron Bailey.

Which means that even though the offensive line could not execute its blocks Aaron Bailey had a giant hole in front of him and the only resistance he had facing him was a guy on all fours trying to trip him at the ankles. 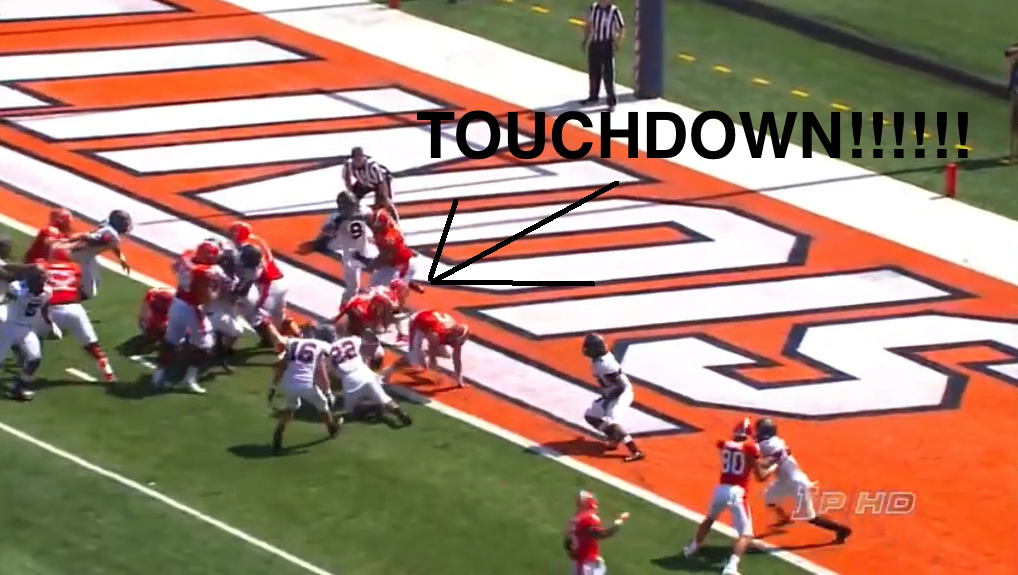 Here it is in never-ending gif form.

So, there you have it. Aaron Bailey's first career touchdown at Illinois comes on a play when a whole bunch of people -- including himself -- screwed up. That's so damn Illini.

Of course, the Illini should have plenty of chances to get things right on this play. After all, Bailey's other carry on the day came from a similar formation and he picked up the first down. Odds are that the Illini are going to run most plays with Bailey out of this modified single wing, and my guess is that for the first month or so, they'll all be runs.

Then, at some point during Big Ten play, when all of Illinois' opponents have plenty of this formation on tape, Bill Cubit is going to pull out a bomb to Spencer Harris or who ever is lined up out wide.

Aaron Bailey is going to be a part of this offense in 2013, and I'm looking forward to seeing how the Illini go about using him.