I'd like to start this week's #AskTCR Mailbag by praising the dolly. You know what a dolly is, don't you? It has all sorts of different names, but it's always the dolly to me. 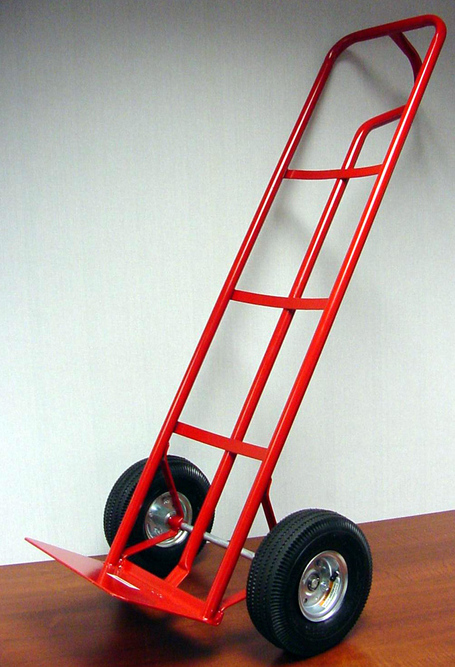 You beautiful bitch, you.

You see, yesterday my parents needed me to come over and bring in their new oven. This also involved my brother-in-law, Joe. My parents live in an apartment building on the second floor, and this means Joe and I would have to navigate our way through a stairway up a few flights of stairs just to get the oven inside.

And last year my parents got a new couch, which broke off into sections. It was Joe and I who had to bring that through the stairway as well, and while not heavy, it was a huge pain in the ass to maneuver the part of the couch with the pull-out. That part was heavy, big and barely fit through the halls and the door.

Well, yesterday when it came to the oven, we had ourselves the dolly. Oh blessed dolly, you made our night so much easier. Sure, it took manly man strength to lug an oven up two flights of stairs and then lower the old stove down those same stairs (I looked like I'd just finished a damn marathon when I was finished. Apparently you sweat more when you get older.), but you eased the burden.

And for that our backs thank you.

Anyway, let's get tot he questions. If you want to see your question in next week's version of the mailbag, here's how you would go about doing that.

And onto the questions!

Well, truth be told, I'd be much happier with both. Also, this question is not as easy to answer as a lot of you might think. The fact is that, barring some kind of disaster, the Illini will be halfway to a bowl game after Saturday's game. It's also a lot easier for a football team to get to a bowl game than a basketball team to make the NCAA tournament.

There are currently 35 bowl games, which means 70 of the 125 teams (56%) on the FBS level will play in a bowl game every season. Only 68 of 347 Division 1 basketball teams (19.5%) qualify for the NCAA Tournament. Though, obviously, playing in a conference like the Big Ten certainly increases your odds of getting there.

But the main reason this isn't so easy to answer is because it's hard to know for sure what's going to happen with the basketball team this year. We know that the football team isn't great, but it has a chance to get four more wins in a Big Ten conference that looks vulnerable.

The Big Ten doesn't look nearly as vulnerable in basketball, and the only players returning from last season's tournament team are Joseph Bertrand, Nnanna Egwu, Tracy Abrams and Mike LaTulip. Rayvonte Rice was a member of the team last year, but was ineligible to play.

The last time the Illini had such a great turnover on their roster was under Lon Kruger in the 1999 season. The Illini had a 13-3 record in the Big Ten in 1998 and went to the tournament as a #5 seed before losing to Maryland in the second round. That next year they went 3-13 in conference play and did not go dancing.

So even though there's far more optimism for the basketball program right now than the football program, there are no guarantees here.

All that said, I think the basketball team has the better chance if I'm being forced to pick one. I'm thrilled with the progress I've seen from the football team this year, but I have a hard time seeing three wins in conference play. Whereas I can see the basketball team having a similar record as last season's with a couple resume wins along the way.

#askTcr can we start promoting @IlliniHockey ? Let's get em into the #BigTen #B1G !!!!

Listen, I'd love for the Illini to start a scholarship hockey program and join the Big Ten. I'd be thrilled. I've talked about it here before. And while I went to my fair share of Illini hockey games while in Champaign, I'm a 32-year old adult now. I'm not longer on campus, so it's hard for me to follow the hockey team.

Same with Mark, as he's currently in grad school at Kansas State.

Jack graduated in the spring is no longer on campus.

And while Brandon is still on campus, I'd like him to graduate from college too. So I'm not going to overload him with more duties here.

All that said, if there is somebody who reads this site, enjoys Illini hockey and can write, if you're interested in writing about Illini hockey on the site, let me know. You know where to find me.

#AskTCR If you had to eliminate one sport at the U of I, what would it be?

This goes well with the last question because in order to add hockey the school would have to eliminate a men's sport. Though you didn't specify it had to be a men's sport in your question, and The Champaign Room isn't required to follow the rules of Title IX.

So I'm going to get rid of a women's sport, but before you ladies think I'm picking on you, let's remember that Illinois has nine men's programs and 10 women's programs. I'm just interested in equality here, ladies!

And the sport I'd cut is women's golf. I feel like the obvious choice would be cheerleading but it'd be weird to have male cheerleaders and no females. No, I chose golf because women's golf just isn't that interesting to me. That's it. I'm not cutting soccer because there's no men's soccer and I want to keep at least one soccer program. I also don't want to get rid of tennis, softball, track or swimming. And I'm certainly not getting rid of volleyball.

Trust me, there is no man alive who wants to get rid of women's volleyball.

@Champaign_Room How much $$ would it take to get you to tape the entire Street Madness next Saturday then post it online? #AskTCR

You would have to pay me more than CBSSports does. It's not that I wouldn't want to go to Street Madness, in fact, I would very much like to go. It's just that as a college football writer, Saturdays in the fall are kind of busy for me. And I'm not quite ready to ditch my job -- and possibly lose my job -- to go to a preseason basketball event.

I really want it to happen but I don't think Cliff Alexander is going to commit to Illinois. That said, in the event that Groce's magical powers are too much for Alexander to resist, how would Groce adjust the scholarship situation to make room for him? I guess this is also a question if we get bad news (if ever) the NCAA gives us their decision on Ahmad Starks' waiver request. What is Groce's most likely move (moves?) to get us under the scholarship limits for the 2014-15 season? -- Scott Stein

Ah, the most popular question of basketball recruiting. How the hell is John Groce going to make room. Well, it's kind of like he's said when he's asked about that same question. It's going to take care of itself. Transfers are becoming more and more common in college basketball, and my guess is that if Cliff Alexander does commit to the Illini -- though they already are a scholarship over for 2014-15 in Ahmad Starks doesn't get his waiver -- somebody on the roster will see the writing on the wall and figure they've got a better chance of seeing playing time elsewhere.

Kind of like how Myke Henry, Mike Shaw, Devin Langford and Ibby Djimde all saw the writing on the wall at the end of this past season. I mean, I don't think John Groce is going to bullshit any of his players. If one of them asks where they stand on the roster, I don't think Groce will lie to them about it.

And while I worry about the idea of Groce starting to Crean players, it's kind of just part of the territory when it comes to being a major basketball program. And if that's what we want Illinois basketball to be, we need to live with the other consequences.

@Champaign_Room If you could choose only 11 Illini Football players to play both ways, who would they be and at what positions? #AskTCR

@Champaign_Room I am going to make a donation to the University soon; What do you think is the best organization/fund to donate to? #AskTCR

I am not qualified to answer this question, but I would request that you donate to an area that has more to do with academics. The athletic department gets plenty of money as it is, and I'd prefer the tail wasn't wagging the dog.