The third quarter has been a problem for the Illini ever since Tim Beckman got here, and it could be the difference between a losing and winning season.

Share All sharing options for: The Third Quarter Problem

It's funny, on Monday night, in the interest of finding things to write about to help fill the bye week, I began doing a little research on the problems the Illini have had in the third quarter. Through three games it's been noticeable this year, but it was a problem last year, and I wanted to figure out if it was just my perception or reality.

Then on Tuesday Mark Tupper wrote about the same thing, though he was focused on the 2013 season, not the entire Beckman Era. Can we call it an Era yet?

While I didn't do all the math, I'm fairly certain the Illini were outscored in every quarter last season. However, the third quarter was particularly bad. In 12 games opponents came out of the locker room at halftime to outscore the Illini 121-49.

If you include this year's games its 169-84. Which means opponents are still doubling up on the Illini in the third quarter. 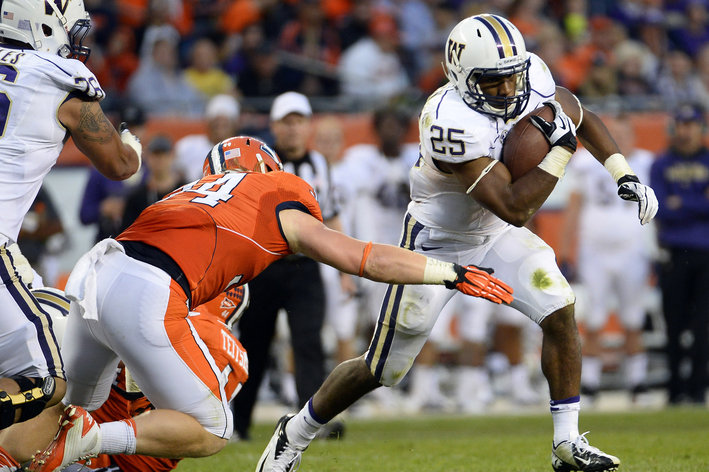 While not absolute, the first and third quarters of a game are when coaching advantages can have the greatest impact. Whether through game preparation or halftime adjustments, coaches can set the tone for what's going to happen in these two quarters.

And I think the change from Chris Beatty and Billy Gonzales to Bill Cubit has had a huge impact on those fronts.

Now, I'm not sitting here trying to pin all of this on Tim Banks. As we've documented here many times, he's got a lot of inexperienced players to work with on defense. However, I am a bit concerned with the defensive adjustments the Illini either are or aren't making on the defensive side of the ball.

When the third quarter began on Saturday Washington had the ball. Then, as J Leman pointed out during the broadcast, the Huskies basically ran the same running play behind their right guard and right tackle over and over again. As a result they drove 75 yards in seven plays and under two minutes to extend their lead to 17-3. On the drive Bishop Sankey and Jesse Callier got the ball on every snap and picked up each one of those 75 yards.

Sankey and Callier ran to the right side on the first five plays of the drive, picking up 52 yards. Sankey then went left on the sixth play for 22 yards before a one-yard plunge up the middle for the touchdown.

Obviously Washington coaches saw something at halftime it could exploit and it did so. Whether it was schematic or just a matchup advantage, I don't know. That's why I'm not going to put the blame on Tim Banks for what happened.

But these third quarter numbers aren't just from the Washington game. Yes, the Huskies scored 21 points in the third quarter, but it's not like they were the first team to do that to the Illini in the last two seasons. Louisiana Tech scored 24, Michigan scored 21 and Northwestern scored 21 last season (The difference with the Washington game was that the Illini managed to score 14 points of their own. In those three games from last season the Illini were outscored 66-0).

There's obviously a trend here, and one that the Illini coaches need to work on. The third quarter is important for setting the tone in the second half and considering this Illini team will likely be involved in a lot of close games this season, odds are the third quarter could decide whether this team goes bowling or not.