The fact the Illini fought back yesterday was nice to see, but it doesn't change the fact that a lot of problems were evident on Saturday.

Losing sucks. I don't need to tell you that, you're an Illinois football fan. You have plenty of experience with losing and how much it sucks. However, Saturday's loss to Washington just didn't have the same kind of doom and gloom feeling we've grown accustomed to around here accompanying an Illini loss.

The Illini played a good team on Saturday and got thoroughly outplayed. Yet they only lost by ten points, and we didn't learn anything we didn't already know about this team.

So Much For The National Championship 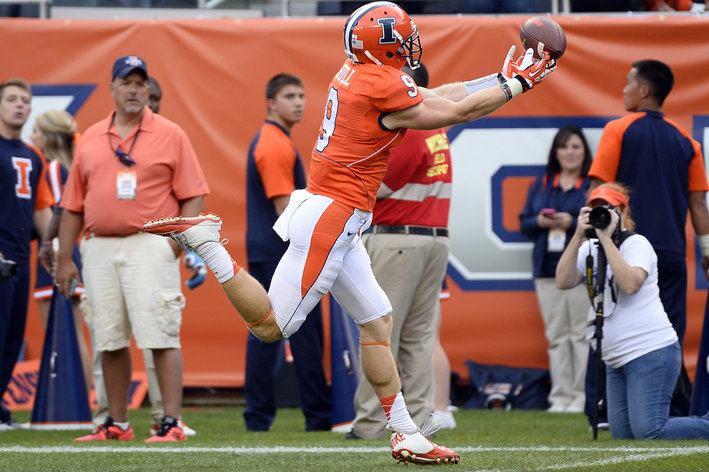 The Illini defense isn't exactly stout. It gave up 615 yards and 7.2 yards per play yesterday.

The Illini defense doesn't have much of a pass rush. The Illini managed two sacks on Saturday, but Washington dropped back to pass 37 times, so that 5.4% sack rate isn't exactly impressive.

The Illini defense is susceptible to the big play. It had given up 13 plays of 20 yards or more coming into yesterday's game. It gave up 10 such plays on Saturday.

Now, none of these things are good. They're all problems, and problems that need to be addressed. However, they were problems in the first two games and the Illini were able to overcome them because they're 2-1. They nearly overcome them again on Saturday, battling back from a 31-10 deficit with under 20 minutes to play to get back within a touchdown.

And I think that's what I found to be the most promising aspect of this loss.

As has been the case around here for too long, the Illini came out of the locker room at halftime and got beat up in the third quarter. Washington scored three touchdowns to build that lead up to 31-10, and with what we've seen from this team -- especially last year -- we all assumed the game was over. We'd seen it too many times. I was expecting Washington to continue running over the Illini and eventually win by a score similar to our 45-17 win over Cincinnati last week.

But that's not what happened.

Instead the Illini played like a team with nothing to lose. Nathan Scheelhaase dropped back and chucked a ball deep over the middle to Ryan Lankford for a 72-yard touchdown. Of course, that alone wasn't enough. The Illini needed to get the ball back and keep scoring.

And they did it again.

Now, we know how it would end. Following Aaron Bailey's second touchdown the Huskies would put together an 11-play drive that took nearly five minutes off the clock and ended in a field goal, making it a two-possession game with under five minutes to play.

And seeing that field goal go through the uprights hurt, but the fact that this team had actually fought back instead of laying down and dying left me happy anyway.

Yes, the Illini played like crap for a lot of the game and only lost by 10 points. However, Washington also shot itself in the foot numerous times. The Huskies committed 12 penalties for 104 yards, a couple of which were personal fouls to extend Illini drives. The Huskies also turned the ball over twice. So, yes, it was nice to see the Illini fight back and lose by only 10 points to a team that appears to be very good.

But that doesn't change the fact that they were totally outplayed and that if the Huskies hadn't been spending so much time beating themselves, the Illini would have lost by a lot more than 10 points.

...if the Huskies hadn't been spending so much time beating themselves, the Illini would have lost by a lot more than 10 points.

Then there's the offense, which had been what this team was living on through the first two games. Yesterday was far and away their worst performance of the season. The Illini averaged 5.3 yards per play yesterday, but those numbers are skewed a bit by the 72-yard touchdown to Lankford. Take away that play and the number actually drops to 4.2 yards per play, which is not good.

The Nathan Scheelhaase we saw yesterday was the Scheelhaase we hoped was gone forever. Coming into the game Nate had thrown 19 incomplete passes. Last night he threw 16 and completed only nine of his 25 passes. And while the Illini dropped a few of them -- that Steve Hull dropped touchdown was huge, I don't care that it happened so early, it set the tone -- most of those incompletions were on Nate. He was just missing guys with poor throws.

He also hung around in the pocket waiting to be sacked. The Huskies didn't really blitz much -- if at all -- and stuck with a four-man rush while dropping seven guys into coverage. It was the same thing they did against Boise State. Well, the Illini receivers -- who are not great, and we all know that -- couldn't get any separation, but Nate just sat there hoping they would. He'd then eventually get sacked or be forced to make a bad throw to avoid being sacked.

What he needed to be doing was being the Nate of Cincinnati. Either get out of the pocket and see if you can make anything happen with your legs, or at least be able to throw the ball away. Nate did not do that yesterday, and hopefully Bill Cubit can get him back in line during the bye week before the MIami (Ohio) game.

Besides Scheelhaase, we also didn't see much of a run game from the Illini. Donovonn Young finished with 58 yards on 13 carries while Josh Ferguson had 29 yards on four carries. Those numbers aren't terrible, but the fact is if you take away each of their longest runs our two running backs carried the ball 15 times for 57 yards. It was nice to see Donovonn Young going north and south, but it'd be nicer to see better results.

That's on both the offensive line and the backs themselves.

So, yes, the loss to Washington left us all with some positive feelings. But the problems we've seen from this team were still evident and still need to be addressed. We have a week off to do just that and then a game against a Miami (Ohio) team we should beat with ease before heading into Big Ten play.

Make no mistake, I'm happy with the results we've seen three weeks into the season, but as I wrote last week, the expectations have changed. At first I just wanted two or three wins and to see some fight in this team. It's not October yet and those goals have basically been accomplished.

Now I want to see this team fight for a bowl game.

But that's not going to happen if it doesn't improve some of these problem areas before Big Ten play starts.