Getting more consistent yardage out of the run game was a big contributor to Illinois’ 45-17 domination of the Cincinnati Bearcats this past Saturday. Without a successful run game the previous week against SIU, the Illini struggled to milk the clock and very nearly let the game out of their grasp in the waning moments. Realizing that the traditional between-the-tackles rushes may not work against a significantly better defense, Illinois OC Bill Cubit (or as I know him, my one true love) implemented some unconventional tactics in the run game against Cincy.

And now, for something completely different: 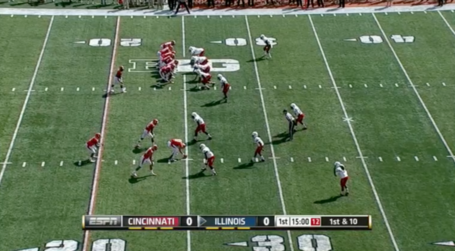 Before we get to the slightly-more-important stuff, I cannot move on without noting that #CubitSwag (I’m forcing this to become a thing) was in full force for the first play of the game on Saturday, as the Illini came out in the "Swinging Gate" formation. All of the offensive linemen were lined up on the left side (appropriately on top of the #B1G logo) with a tight end (I believe it’s Evan Wilson) next to them on the left. The team’s most explosive skill player, Josh Ferguson, lined up in the backfield, in position for a quick screen. TE Matt LaCosse lined up as the snapper on the right hash, and ran a fly route on the play. Flanking LaCosse were WRs Spencer Harris and Ryan Lankford, who ran a comeback and a quick out route, respectively. So that's somewhat confusing to explain in text. I wonder what that play would look like diagrammed… 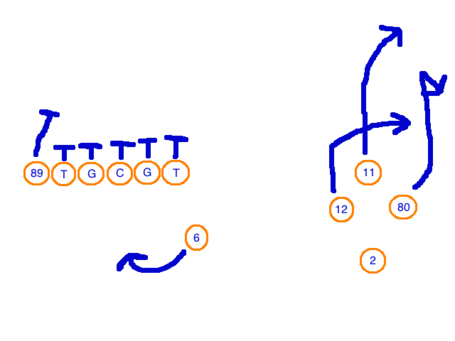 Oh look, it’s an excellent diagram of the play, complete with numbers of the involved skill players! Okay it kinda sucks, but I promise I’ll get better as the season rolls on. Anyway, that’s the play. I was interested to see Nathan Scheelhaase looking at the linebacker in the middle of the field before the play. It makes me wonder if he was reading that linebacker and, seeing that he was prepared to run around the O line and stop the screen pass, decided to throw the ball downfield on the right side. Sometimes it's just hard to know whether a play was controlled at the line or determined before the players even lined up.

In any case, Scheelhaase rolls out right after feeling pressure from the defensive end on his left. He ends up just throwing the ball away, as Cincy covered all of the routes pretty well. It is notable that the screen pass is wide wide wide wide wide open, but that’s at least partially because the aforementioned LB by the hash marks began drifting towards the other side of the field. It seems like this play would still be best executed by using the screen pass, but for whatever reason the Illini didn’t go that route (ha ha get it because it’s a pun on "routes" in football ha ha). Here’s a quick video of the play, so you can dissect all this information and see it in action:

We may not see this play the rest of the year as it’s pretty obvious what’s going on, especially now that the Illini-specific formation is on film. Unlike the Swinging Gate, there’s a good chance this next play will make consistent appearances in Illinois games this year.

As I mentioned earlier, the struggles of the conventional run game against SIU were well documented (especially by me!!!). Against the Bearcats, Cubit asked the wide receivers, specifically Ryan Lankford and Martize Barr, to carry some of the load:

LANKFORD END AROUND OF GLORY 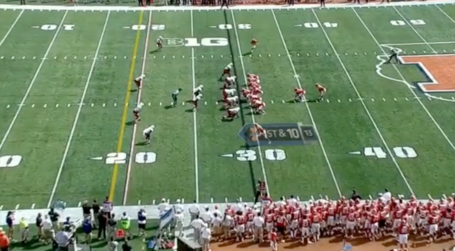 Our first of two plays begins in the basic I-formation, with a running back, two tight ends on either side of the line, one fullback, and two receivers out wide. Prior to the snap, Ryan Lankford (#12) motions toward the line from the right. At the snap, Lankford darts backwards to receive a quick pitch from Scheelhaase. 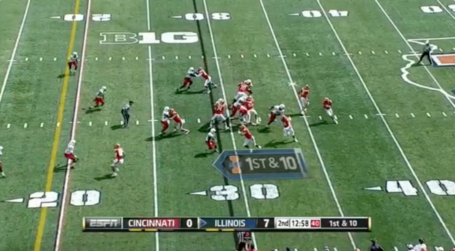 Right guard Ted Karras (#69), Illinois’ best lineman, pulls out to the left, becoming the lead blocker for Lankford on the end around. As you may notice in the video, Karras does an excellent job of bumping, but not engaging, a Cincinnati defensive lineman. This allows Karras to continue running ahead of Lankford while still allowing his WR just enough time to get the edge. Additionally, both backfield players run out ahead of Lankford to block the linebackers coming across the middle of the field. Tight end Evan Wilson (#89) also does a good job of quickly bumping that defensive end before moving on to an LB. 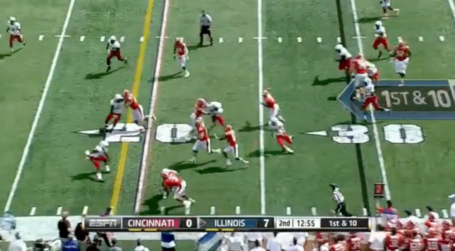 This play looks a bit crowded at first. Lankford doesn’t have a lot of space, but it looks like he could fall forward for a 10-15 yard gain. 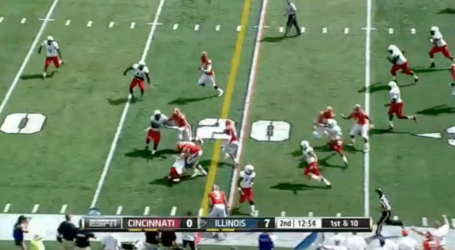 Hold on a second… 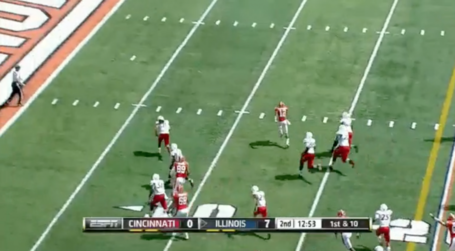 WHEEEEEEEEEEEEEE. There’s really not much to say about this play other than noting that everybody seemed to do a good job with their assigned blocks. Spencer Harris (#80) and Evan Wilson came on at the end to open a cut-back hole for Lankford, and he doesn’t hesitate to take it to the house:

Cubit called Lankford’s number a couple more times in the rest of the game on end arounds, but none had quite the same success as the first. The Illini were able to get a successful jet sweep with Martize Barr, however:

This is something I firmly believe we’ll see from the Illini offense in subsequent weeks. They likely won’t have this same amount of success against the more accomplished Big Ten defenses, but anytime you can get a playmaker in space, there’s potential for good things to happen. Plus, as these plays are now in the film room of every team the Illini play this year, I have no doubt that Cubit will develop some counters and play action passes to attack defenses that play the sweeps too aggressively. Between these end arounds, rushing for decent yards between the tackles, and scrambles from Future Heisman Winner And First Round Draft Pick And President Nate Scheelhaase, Illinois was able to rack up over 200 yards on 5+ yards per carry. Hopefully, they’ll continue to have success with these plays in the future.

Do you want to see more reverses and trickery from the Illini offense as they move closer to the conference games?