The Day After: Escaping Southern Illinois

It certainly looked bad, but it really wasn't as bad as it seemed.

Share All sharing options for: The Day After: Escaping Southern Illinois

Did you know that this is the first Day After column I've written here at The Champaign Room that follows an Illinois win? It is. The Champaign Room didn't make its debut until late October last season when the Illini were already in the midst of their nine-game losing streak to finish the season.

So, here I am, writing my first post-victory football recap, and yet for some reason I still feel as though the Illini are coming off a loss. I guess that sums up life as an Illini football fan pretty well.

The Illini win their first game in nearly a year and you still feel like shit about it. 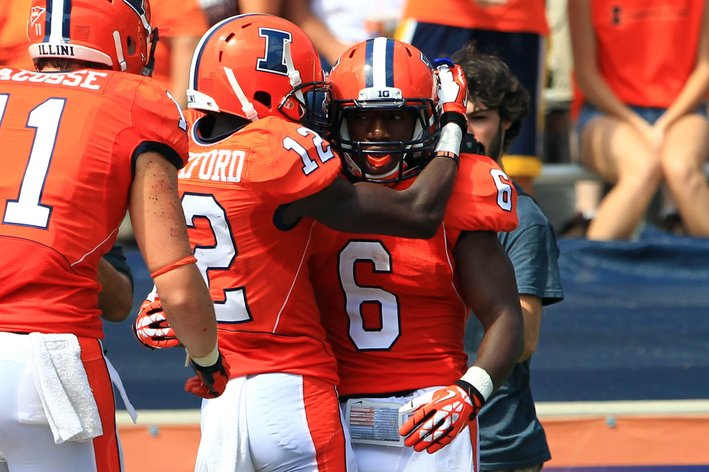 An ugly win is still a win

Honestly, though, yesterday's win wasn't nearly as bad as it looks if you just look at the score. Yes, the Illini definitely gave us reasons to worry, and the coaching staff certainly made some questionable decisions, but if a few plays went a different way, things are a lot different at the end of the game.

The two plays that stand out to me the most are a dropped pass by Ryan Lankford in the first quarter that would have been a touchdown, and a hold on Corey Lewis that negated a touchdown. The Illini would have to settle for a field goal attempt that Taylor Zalewski would miss.

There was also two shanked punts by Justin Duvernois -- one also in the first quarter -- that put the Salukis in great field position, both of which ended in scores.

So the Illini had a real chance of being up 14-0 after the first quarter and instead found themselves down 7-3.

Of course, this is all a lot of woulda-coulda-shoulda, and the fact is that the Illini just didn't. They did drop those passes, they did commit those penalties, and they did shank those punts.

And while that all sucked, there were quite a few positives. Now, we shouldn't take any of these numbers too literally because, close game or not, Southern Illinois is still an FCS team -- though FCS teams certainly had their fair share of success this opening weekend.

That said, the Illini did average 6.4 yards per play yesterday. Which isn't an amazing number, but let's remember this offense averaged 4.47 yards per play last season. And most of that damage came through the air, as one of the Big Ten's worst passing offenses in 2012 managed to throw for 415 yards on Saturday, averaging 11.2 yards per attempt and 14.3 yards per completion.

These are good numbers. These are encouraging numbers. It was the best damn game Nathan Scheelhaase has ever had, and odds are he's going to be the Big Ten's Offensive Player Of The Week because of it.

But then you realize that Illini quarterbacks were sacked five times for a loss of 45 yards yesterday. Against an FCS defense.

The offensive line gave up a sack 11.9% of the time the Illini dropped back to pass. Last year the line allowed a sack 9.9% of the time.

On the flip side, the Illini defense didn't manage a single sack against an FCS team that dropped back to pass 41 times.

These numbers are not encouraging for either line.

Nor was Donovonn Young's performance. I have high hopes for Young this season, but he simply did not look good on Saturday. I haven't had time to watch the game again and really study what was happening on the offensive line, so I don't know if it was a lack of holes causing him to go east and west all day, or if it was his own indecision. Odds are it was a combination of both, but if the Illini are going to win some games this season Young can't be rushing eight times for a total of six yards.

If there was a positive aspect of the run game, though, it was that Josh Ferguson looked pretty damn good. Ferguson rushed nine times for 49 yards and also caught four passes for 103 yards, including a 59-yard touchdown. It was nice to be reminded of what Josh Ferguson is capable of when healthy and in space.

It was also nice to see the Illini doing damage on special teams, as V'Angelo Bentley had a 100-yard kick return for a touchdown and the Illini actually moved forward on punt returns!

As for the defense, yes, we should be worried. The Salukis had 407 yards of offense and averaged 6.1 yards per play. The good news is they did most of their damage through the air, as the Illini were able to handle a rushing attack that featured quite a few former FBS players in it.

Field position is boring, but it is oh so important.

The other good news? The Illini defense gave up four touchdowns on Saturday, which isn't good. However, of Southern Illinois' four touchdown drives, only one was for longer than 50 yards. That was a five-play, 75-yard touchdown drive late in the third quarter. The other touchdown drives were the products of turnovers and shanked punts, as they were of the 42, 8 and 31-yard varieties.

Field position is boring, but it is oh so important and when you look at the disparity of starting field position both of these teams had based just on that stat above, you can see why this game was so much closer than expected.

So, no, we probably shouldn't feel very good about yesterday's win, even though it was a win. Particularly when we saw how our next two opponents, Cincinnati and Washington, played on Saturday. The Bearcats and Huskies outscored their opponents (Purdue and No. 19 Boise State) by a combined score of 78-13 yesterday.

If the Illini make the same kind of mistakes they made against Southern Illinois against either of those teams we'll find ourselves 1-2 real quick.

The good news is, the mistakes the Illini made are avoidable. We just have to hope they can avoid them going forward.