Share All sharing options for: #AskTCR: Will Donovonn Young Rush For 1,000 Yards?

We've got a lot of questions to get to this week so I'm not going to waste your time with a long intro. All I'll say is that today is the last day of the offseason for Illini football players as camp opens on Monday. And that just means the season is that much closer.

But we'll cover that plenty over the next few weeks. Let's get to the Mailbag. If you have questions for the #AskTCR Maibag, here's how you can go about getting it answered.

I'm pretty confident he won't, but it's got nothing to do with Donovonn Young. As I talked about after Bill Cubit was hired and following the spring game, I think Donovonn Young is a much better fit in the new offense than he was in the offense last season. A year that saw him rush for 571 yards and 3 touchdowns. But in last year's offense Young started every single damn one of his carries going east or west.

That won't be the case this year, as Cubit uses an old-fashioned power running game in that Young will take the hand-off and be heading north to find a hole and get through it.

But I still don't think he's going to get to 1,000 yards because, well, that's not easy to do. Only 54 running backs in the country did it last year, and they were all in running offenses. The Illini will be a passing offense in 2013, and although they're not going to ignore the run game -- Cubit's offense is actually pretty balanced, but the pass is setting up the run more than it's the other way around -- I don't see the 20 carries a game that Young will need to get there.

Because that's another important factor to remember. Although Young will probably be the top back on the depth chart, the coaching staff believes in Josh Ferguson and Dami Ayoola as well, and all three are going to see carries.

So, in my mind, a good season for Donovonn will be a year in which he finishes in the 750 yard range with eight or nine touchdowns. Of course, more important than the yards, I'd like to see Young finish with about five yards a carry this season.

@Champaign_Room After five surgeries, what are the realistic expectations for Corey Lewis? Why can't the Illini stay healthy? #AskTCR

Man, I just want Corey to stay healthy. Not for the sake of the team, but for Corey. After all he's gone through my heart would break if he suffered another injury this season.

As for my expectations for him, I think Corey can be a good player on the line, and I think a healthy Corey makes the entire offensive line better. Now, I don't expect him to play to an All-American type level, but I do think he can be an above-average player.

Why can't the Illini stay healthy? They can. Last year was a terrible year with injuries -- and, well, everywhere -- but injuries are random. Some players are "injury-prone" but for the most part it's the luck of the draw. Hopefully we get a lot luckier this season.

@Champaign_Room #AskTCR How many licks does it take to get to the center of a tootsie pop?

Well there are so many variables in play here that there is no definitive answer. How coarse is your tongue? How much saliva do you typically have in your mouth? There's also the Tootsie Pop itself, as there isn't a whole lot of consistency from pop to pop.

However, it takes an average of 987 licks -- straight licks, no biting or sucking -- to get to the center.

Well, for the most part, not during the summer. You'll see a guy make a decision here and there at that time, but the majority of players don't make decisions until the fall, usually before basketball season starts. So you can expect to hear a lot of news about players committing in September and October.

However, I don't know if you'll hear much about Illini commitments at that time. Groce is going after the big dogs in the 2014 class, and a lot of times the bigger name recruits wait as long as possible before announcing this decision.

But just for reference, in the 2013 Illinois basketball class, only Maverick Morgan committed last summer, doing so in June. Kendrick Nunn and Malcolm Hill committed in September, Jaylon Tate did so in October and Austin Colbert in November. These are usually the prime months for basketball commitments.

#asktcr If I'm unfortunately based in Louisville and can get to one Illinois game home or away (PSU is too far), what game should I go to?

Well, let's see. It's a about a three and a half hour drive from Louisville to Champaign, so if you wanted to go to a home game, I'd say the Michigan State or Ohio State game would be the best options. I pick Michigan State just because I think, of all our home games, if the Illini are going to upset somebody this year, it's going to be the Spartans.

I mention Ohio State because the Buckeyes might be playing for a national title this season. So you'd get to see a really good team, and given our recent history with the Buckeyes, maybe you'll see something amazing.

For road games I'd suggest Indiana (about two hours) or Purdue (three hours) because they're not that long of a trip and both are winnable games for the Illini. And while it sucks to be at a road game when your team loses, it's a million times better to be the asshole in the Illini gear in a stadium full of Hoosiers (well, as full as an Indiana game is going to get) after the Illini just won.

@Champaign_Room #askTCR With Wes Lunt in tow for next year, who leaves Illinois: Reilly O'Toole, Aaron Bailey, both or neither?

I really don't think so. Reilly will be a senior next season and at this point in his career, though I'm sure he wants to play, I'm relatively certain he's using football to get his college education, not get to the NFL or anything. So I don't see him leaving in search of playing time elsewhere.

With Bailey I don't know the future for certain, but this is a kid that committed to Illinois early and never wavered. He had offers from Ohio State, Nebraska, Wisconsin and Northwestern. He also had interest from Notre Dame. Never at any point was there a reason to worry he was going to change his mind about Illinois, even as he watched a terrible season unfold in front of him. Aaron Bailey wants to be at Illinois, and I don't think Wes Lunt is going to do anything to change that.

Are you guys ever going to add a football program? I'll hang up and listen. RT @champaign_room: Last chance: Get in your #AskTCR questions.

If you don't know, Patrick is our friend from Black Heart Gold Pants, which is the home of Kirk Ferentz's $40 million contract extension.

Well, Patrick, I took your question so seriously I made this handy chart for you. Because I know that, as an Iowa grad, words can be a bit difficult for you at times, and what you need are pictures. 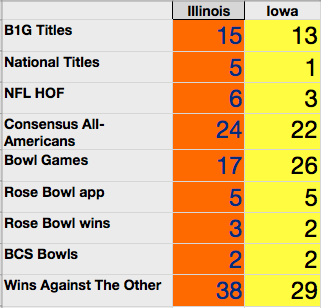 So I think the question now becomes: when the fuck are you going to start yours?