#AskTCR: Who To Root For Besides Illinois?

Share All sharing options for: #AskTCR: Who To Root For Besides Illinois?

So you're probably wondering what in the world #AskTCR is doing here right now. I mean, #AskTCR is supposed to take place on the weekend, damn it! It's a post that Fornelli only writes to get content up no the site on a weekend that doesn't take a lot of effort and allows him some freedom!

Well, it's still all of that, except now that the season is starting #AskTCR will be running on Wednesdays. It would just get lost in the shuffle of football over the weekend, and we don't want it getting trampled to death.

So, welcome to the new Wednesday version of #AskTCR. Exciting, isn't it? No, of course it isn't. It's a fucking mailbag.

Anyway, here's how you can go about getting your question featured here next Wednesday.

All right, so let's get to the questions.

@Champaign_Room Besides the Illini, what college team are you most looking forward to watching this upcoming season? #ASKTCR

As I've mentioned on the site before, and as anybody who knows me is well aware, I'm a Notre Dame fan. Have been my whole life, really and was before I became an Illinois fan. So for me, as in any season, the other team I'll be following closely this season is Notre Dame.

However, I'd like to give you a better answer than Notre Dame.

In fact, what I'd like to do is help you settle on another team to follow this season. Watching college football is my actual job, after all, and I watch football for roughly 15 straight hours every Saturday. Multiple games and multiple teams.

So I have a pretty good idea about what's out there that you should find interesting. So what I'll do is give you one team from each conference that you should "root for." Now, obviously you won't be able to root for each of these teams, but maybe adopt one or two of them.

American Athletic Conference - I'd go with Houston here. Yeah, they're coming off of a down season in 2012, but this was a team that was pretty damn fun to watch while Kevin Sumlin was running things, and I think they're going to get back to that again this season. They're not good enough to win the conference, but they're good enough to keep somebody else from winning the conference.

ACC - If this were strictly for me I'd stay away from top programs, but for you I'm going to say become a Clemson fan. Not only is this team good but it's really fun and creative on offense. Plus the Tigers defense isn't all that great which leads to quite a few awesome shootouts .

Big 12 - Normally I'd say Baylor because I've been a Baylor fan since RG3 first stepped foot on campus and Art Briles took the program over. However, while Baylor is fun, I say you should check out Texas Tech. Kliff Kingsbury was the guy who helped run the offense for Texas A&M last year, and he's returned to run his alma mater this year. He's pretty much the bro-est bro to ever bro and bro this team is going to be fun to watch, bro.

C-USA - Would have been Louisiana Tech -- we all got an up close and personal look what that team can do last year -- but Sonny Dykes left for Cal and was replaced by Skip Holtz so NNNOOOOOPE. Instead go with Tulsa, but just know that if you actually choose a C-USA team to follow you're going to be spending a lot of time watching college football on the internet this season.

MAC - Stay local. Go with Northern Illinois. You probably have friends there anyway.

Pac-12 - Go with Arizona, as the Wildcats are actually my darkhorse team in the Pac-12 this season and I think they could surprise a lot of people. Plus RichRod's teams are always fun when the life isn't being sucked out of him by Michigan alumni.

Sun Belt - It's going to be hard to follow the Sun Belt, but watch Western Kentucky because Bobby Petrino is coaching there now, so it should be pretty damn interesting.

#AskTCR is it wrong for me to adopt this dog and name her Chief? Without telling my wife... pic.twitter.com/IqTq2DBDiH

Of course it's all right to adopt that dog and name it Chief. As for telling your wife about it first, well, okay, so she'll probably be pissed off for a couple minutes but look at that face. HOW CAN ANYBODY STAY MAD AT THAT FACE?

@Champaign_Room #AskTCR How do you like the jerseys we saw at Tuesday's scrimmage? Love the blues.

I thought they were all right. Personally I like the blue jerseys the Illini have better than the orange simply because I think there's just way too much orange going on, particularly with the new helmets. Also I like darker colors in general, so yeah, I like the blues.

If Tim Beckman did get fired at the end of the season, who is the coach you'd like to see replace him? - Mike

That's a pretty good question, and one that isn't all that easy for me to answer. I mentioned Bobby Petrino earlier when talking about Western Kentucky, and that was a name I mentioned last year when there was talk of Beckman being fired. Personally I'm just of the opinion that if you're going to win at a school like Illinois you need somewhat of a "rebel" running the program.

Somebody that isn't afraid to be different or think outside the box.

I like Todd Berry at Louisiana-Monroe, though I don't think his career record would be good enough to please everybody if we did hire him. Whether he was successful at Illinois State or not. But the work he's done at Louisiana-Monroe has been both interesting and impressive, because that's a program that was basically nothing when he got there. And then last year they beat Arkansas and nearly beat both Auburn and Baylor. And they did it by not being scared.

I like that attitude, and I think it could be beneficial here.

#AskTCR We recently had a member of Frogs O' War on our My Little Pony podcast to talk about My Little Pony. Thoughts on MLP and bronies?

I have no idea what you just said. Lay off the weed and watch less cartoons, man.

Maybe, but look at that water skiing form. 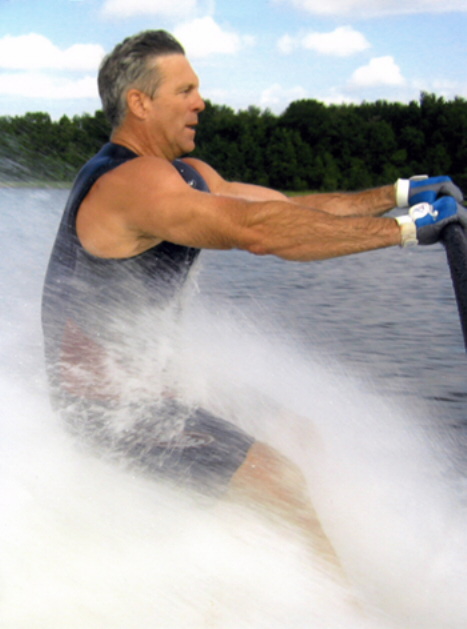 THAT SHIT IS TEXTBOOK.