A Glimpse Of What We Might See With Aaron Bailey?

The Illini showed some of the possibilities during practice on Tuesday.

I make no secret of the fact that the thing I'm most interested in hearing about from Illinois practice the last few weeks is Aaron Bailey. I don't think I'm alone in this, either, as Bailey provides a possibility of something we just didn't see much of with the Illini last season.

Aaron Bailey might just be pretty damn fun to watch. 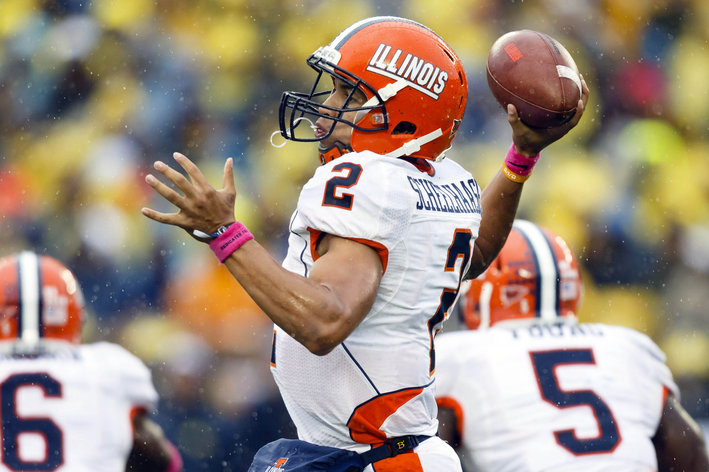 And fun is something that we shouldn't take for granted in a season that could be long and filled with losses. We're going to need to find joy wherever we can, and Aaron Bailey seems like the most likely source of it. So it's cool to read things like this in the Chicago Tribune's report from Tuesday's practice.

Illinois coach Tim Beckman gave a sneak peek of how he might use freshman quarterback Aaron Bailey this season.

The Illini moved practice to Memorial Stadium Tuesday as they began preparation for the Aug. 31 opener against Southern Illinois. During an open-scrimmage portion of practice, Bailey was inserted in a goal-line situation after starter Nathan Scheelhaase connected with receiver Spencer Harris on a long pass play. Bailey ran up the middle for a touchdown on an option keeper, a familiar sight for those who witnessed Bailey run the ball in high school at Bolingbrook.

Bailey also lined up on the edge for the field-goal unit, backing Beckman's claim that the freshman would be used on special teams. Illinois obviously wants to add the element of trickery with Bailey. The Illini attempted a fake field goal 20 minutes into practice, but backup long snapper Michael Martin had trouble delivering a clean snap, and the play failed. Bailey lined up on the right edge and seemed prepared to be involved in the play.

I really like the idea of using Bailey at the goal line. It's important to remember that Bailey is listed at 6'2 and 220 pounds. Donovonn Young is 6'0 and 220 pounds. So when you look at an Illinois offensive line that had a lot of problems pushing defensive lines off the line of scrimmage in the run game last season, using Bailey and the running backs in the goal line situations could be nice.

Think of how Oklahoma used Blake Bell over Landry Jones whenever it got inside the 20 last season.

The Illini were seventh in the Big Ten at touchdown percentage inside the red zone last season, and Bailey could help to improve that because if you can't overpower a defense you can confuse it with numerous options to cover.

As for the special teams stuff, well, I just hope they have plenty of chances to do whatever they were planning there this season.