Northwestern Has The Worst Football Fans In The Big Ten

This is not an opinion. This is the result of an actual study.

Share All sharing options for: Northwestern Has The Worst Football Fans In The Big Ten

Earlier today I wrote a post mocking Northwestern for being the eighth or ninth most popular school within the city it tries to claim as its own. Admittedly I did it just to watch Northwestern fans get mad.

It's not difficult to do, but it's fun all the same.

In reality I know you can't judge how big or good a fan base is based on participation at a 10K. No, in order to do that you need to do an actual study. The kind of study filled with math and science. The kind of study that takes a lot of time and research that I just wouldn't want to do.

But, thankfully, somebody else did. And you'll never guess which Big Ten school has the worst football fans.

The Ohio State University finished in first place in our ranking of Big 10 fan bases. In the ten year period of our study, the Buckeyes averaged 2.5 more wins per season than Penn State and Michigan, but also generated 20% more revenue. Remarkably, Ohio State made this revenue with fewer fans in attendance, on average, than Penn State or Michigan.

Penn State very narrowly edged out Michigan for second place in our study. Over the course of the study, Penn State and Michigan averaged almost the same number of wins (Michigan had more) and football revenue per year. However, Penn State's second place ranking may be short-lived. The last couple of years have seen a decline in attendance. This may, of course, in part be due to the recent scandal and sanctions at Penn State.

Indiana and Northwestern are at the bottom of the Big 10 fan base rankings. Indiana seems to suffer from the same issue faced by Kansas or Duke. That is, how do you build football brand equity in a "basketball school"? Northwestern is an interesting case. A comparison with in-state "rival" Illinois (ranked 8th) is quite revealing. In the period our study, Northwestern averaged 1-2 more wins per season than Illinois. However, Illinois average 88% of capacity attendance, while Northwestern averaged 62%. Illinois also produced 30% more football revenue than the Wildcats. 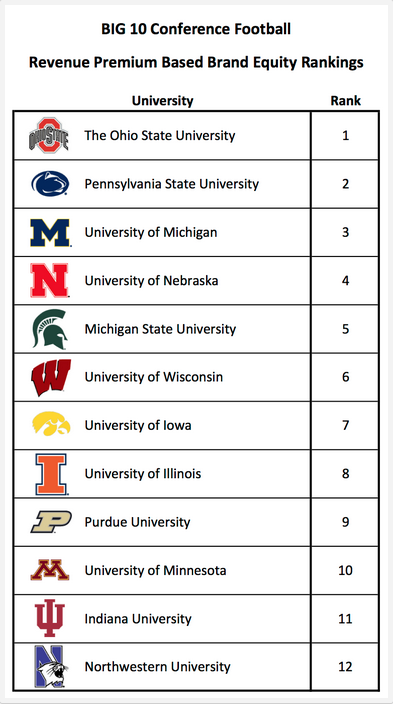