A New Identity Is Forming

I hope you guys are ready to see the Illini chucking the ball up and down the field.

Share All sharing options for: A New Identity Is Forming

When Illinois first hired Bill Cubit it was safe to assume that things were going to change around here. As I went over at the time he was brought on, throughout Cubit's career he's run offenses that were of the pass-happy variety. Which is quite a departure from what we've seen around here in the last decade.

While Jeremy Werner sort of stole my thunder on this topic already -- though I tweeted about it first so I WIN -- the change is even clearer now. While I expect the Illini offense in 2013 to be an amalgamation of what we've seen in the recent past and what we should expect to see in the future, our 2014 recruiting class really seems to pound the point home.

As mentioned in the tweet I linked above -- holy shit, now I'm stealing my own thunder, I cannot protect my thunder from anybody -- if you include Wes Lunt in the 2014 recruiting class, six of the 13 members currently in the class are either quarterbacks or wide receivers.

Lunt and Chayce Crouch our your quarterbacks, and they're both similar builds. Lunt is 6'5, Crouch is 6'4. Then there are Tyrin Stone-Davis, Geronimo Allison, Mike Dudek and Malik Turner at receiver. Of those four receivers only Dudek checks in under 6'0, and even he's 5'11. 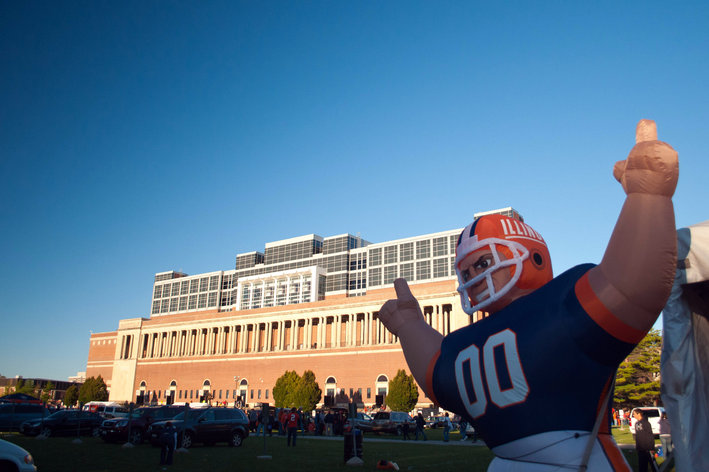 The Illinois offense sorely lacked playmakers last season, and not only have Tim Beckman and his staff gone out looking for some, but they've clearly put a focus on one aspect of the offense. I like Matt Domer, but it's clear that Matt Domer and the rest of the running backs are going to complement the passing attack, not dictate the offense. Not that Domer can't put up big numbers in such a situation.

Just ask Oklahoma State's Joseph Randle how being in a passing attack worked out. He rushed for 2,633 yards and 38 touchdowns the last two seasons in an offense that set up the run with the pass.

And I think Oklahoma State is an apt offense to look at when it comes to where Illinois could be headed. Bill Cubit has been using a spread offense since before the spread was actually cool, but listening to Tim Beckman talk recently, it seems that lining up three or four receivers isn't the only thing he wants to do. He's mentioned tempo a number of times, in particular, speeding it up.

So it sounds like the Illini got a quarterback from Oklahoma State with the intent of putting him in an offense like he ran at Oklahoma State. And if that's the case, honestly, I'll be thrilled.

While I'd have preferred to see the Illini adopt an offense like Stanford has perfected, as did Wisconsin before it, an up-tempo Air Raid kind of attack might just work better in the Big Ten. Because it would be a lot more unique.

You know why a triple-option attack is a pain in the ass to face during the middle of the season? Because you don't see it very often, so you have to change just about everything you do in practice the week before to get ready for it, and on limited time.

Well, aside from Indiana, nobody else in the Big Ten is running an up-tempo Air Raid style of offense. And Indiana will be in a separate division than the Illini. So other teams in the West Division will have to prepare for a style of play they just aren't used to seeing all that often, giving the Illini a minor advantage every week.

And there's precedent in the Big Ten that this can work.

It wasn't too long ago that Purdue was running a similar offense with a guy named Drew Brees at quarterback. While the Purdue offense didn't have the same tempo of today's Air Raid's, it was still very effective.

Now, obviously, a player like Drew Brees doesn't come around all that often, but as we see throughout college football these days, you don't actually need Drew Brees to make this offense work on the college level. Though having him certainly helps.

Big, strong-armed quarterbacks combined with big, fast receivers. With shifty straight-line running backs who find the hole and head north sprinkled in. This is what the 2014 class is made of on offense, and this is where the Illini plan to go.

The only question now is will it get there in time.