Tim Beckman Sheds Some Light On The Quarterback Situation

Share All sharing options for: Tim Beckman Sheds Some Light On The Quarterback Situation

On Wednesday afternoon Tim Beckman brought his special brand of talking louder than he needed to -- somebody really should explain to him what the microphone actually does -- to the Hilton in Chicago, and after speaking for the full fifteen minutes he was allotted, we really didn't learn all that much about him as far as the team is concerned.

Beckman talked about a variety of things, including the new targeting rules that will be in place this season, Bill Cubit, and even clearing the air on the WIN acronym -- turns out Beckman used it while he was at Bowling Green in from 1998 to 2004 SO IT LOOKS LIKE WE HAD IT FIRST AFTER ALL, NORTHWESTERN.

Beckman also said that the depth of the roster he inherited last year "was an issue," which is a bit of a shot at Ron Zook that I've taken plenty of times before. It's an issues he's rumored to have mentioned behind the scenes before, but never really in such a public forum. 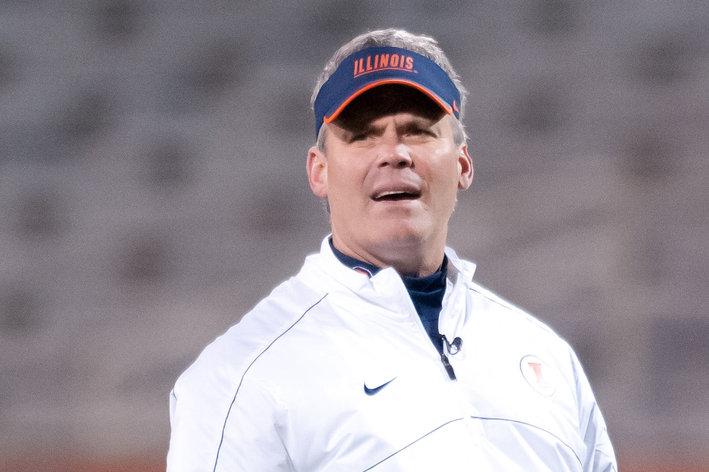 Every word coach yelled into the microphone

However, when it comes to actual news, there really wasn't any. Save for some quotes on Nathan Scheelhaase being our starting quarterback. Which doesn't come as much of a surprise, but what was interesting is that Beckman made sure to qualify the statement when making it.

He would qualify the statement again later when answering a question about Reilly O'Toole.

"This last year [Reilly] had 270 plus plays. So, again, experience, can't ever take away from experience," said Beckman. "That's why we play freshmen, because we want them to be able to experience the game of college football. Nothing takes away from the game and learning the game.

"So I think Riley has progressed so that, again, through experience, through plays last year, he'll be able to step in and perform better. But, again, as I mentioned before, Nathan Scheelhaase is our starting quarterback right now, and I'm proud to have him involved in our football team."

You'll also notice that Beckman said "that's why we play freshmen." Which I found interesting because earlier in the press conference Beckman had this to say about Aaron Bailey.

"Aaron Bailey, hey, I mean, we haven't been able to work with Aaron Bailey," he said. "But Aaron Bailey was brought here to compete, and I think he chose the University of Illinois because he knows he's going to be able to compete. So he'll get the exact same opportunity as all of our quarterbacks."

Which to me means that if the season were to start right now that Nathan Scheelhaase would be our starting quarterback, but once camp opens in a few weeks, Aaron Bailey is going to get every chance to compete for the job.

And I think that's a pretty good indicator of how the Illini will be approaching this season. Now, I don't think Aaron Bailey will enter the season as our starting quarterback. It's nothing against him or his talents, but it's more the reality of Bailey coming from the system he ran in high school and learning an entirely different system -- one that's more a passing attack than a running attack -- in the span of a few weeks of practice. It's not only difficult to expect that kind of growth, but it's also a bit unfair.

However, even though I don't expect Bailey to be starting come the Southern Illinois game, the fact Beckman said "that's why we play freshman" makes me think that Cubit and the staff plan on finding ways to get Bailey on the field this fall. Which makes a lot of sense, because if there's one thing this offense sorely lacked last season, it was a playmaker. Aaron Bailey may be the best athlete on the offense, and he might also prove to be that playmaker the offense desperately needs.

Of course, on the flip side of that, it also makes sense to redshirt Bailey so that when Wes Lunt is eligible next year he's still a freshman eligibility-wise, while Lunt's a sophomore. Though it's possible that Beckman just doesn't feel that's a luxury he can afford considering that people wanted him fired after only one season, and this team just doesn't have the depth or talent at its disposal to let a player like Bailey sit on the sideline all season.