Illinois has a rich football history. It's time we actually used it.

I was in Foundations of Sports Management my freshman year, first semester. There were 8 football players I can remember being in the class, as many of them share the same major as me, recreation, sport and tourism management.

To introduce the book we would be reading, our professor simply asked, "Who is the only person with a statue of themselves on campus at Illinois?"

No one spoke up, so he added, "It's right outside the football stadium."

Now I knew exactly who he was talking about; Harold "Red" Grange, football's Babe Ruth. Someone answered the question, and then he dropped a final question, "How many of you know who Red Grange is?"

I along with maybe 15 others in a class of over 100 raised my hand. Only one football player raised their hand. This is unacceptable. 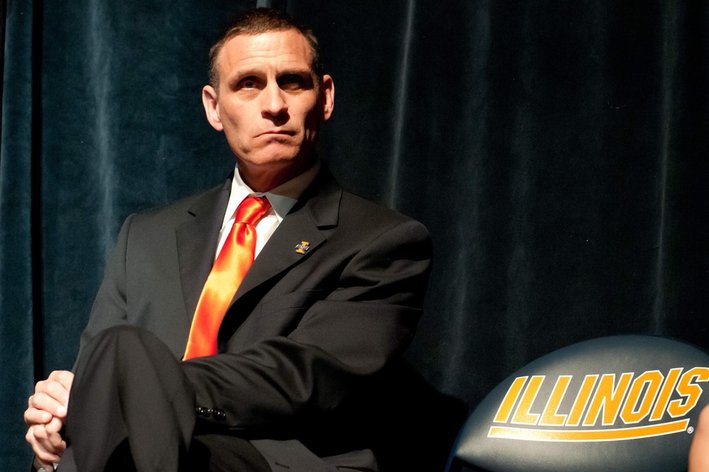 You are seriously telling me that the majority of the football players didn't know who Red Grange was? They don't know that he was voted the best college football player of all time by ESPN? What about Robert Zuppke, who has the field named after him? How about Ray Eliot, Mr. Illini himself? Do they know George Halas went to Illinois? Do they know that Illinois is the only school with two charter members of the Pro Football Hall of Fame in Grange and Halas?

Do they even know our history?

Based on what I see, the answer to that question is no. That means our history is not being used in recruiting. That is unbelievable to me.

Before you can know what you are going to be, you must first know where you are, and where you have been. Our players don't know what the Illini football team is. Our history is rich and great. It's time we used it.

I was born a Cardinal fan, and one of the large draws of going to the game is knowing the history of the team. I knew who Ozzie Smith was when I was 6 years old. I also soon after learned about Stan Musial, Bob Gibson and all the other Cardinal greats. It's a requirement as a fan, and as a player to know what it means to play the Cardinal way.

The same should be true with Illini football.

If it was up to me, and I was running the team, no player would be allowed on my damn field until they can tell me what the Proper State of Mind is. (If you are an Illini fan, and you don't know, watch this and learn.)

They also need to be able to tell me Robert Zuppke won 4 National Championships and invented the huddle and the flea flicker.

This is Illinois football. We are the Galloping Ghost destroying Michigan at the dedication game of Memorial Stadium, scoring six touchdowns, the first four the first four times he touched the ball.

We are the Proper State of Mind.

We are Dick Butkus terrorizing the opposition.

We are Juice Williams on third down against No. 1 Ohio St in The Horseshoe.

We are all these things and more. We are Illini. It's a privilege to be one and it's time we acted like it.

Our players need to start living up to the legacy of those who came before them, but do to that, they need to know the history.

Very few schools in the Big Ten can match the history of Illinois Football. This gives Illinois a huge advantage, but it is not utilized. It's time that the program started to.