BP3 had his best game of the summer league with the Minnesota Timberwolves on Tuesday.

Share All sharing options for: Checking In On Brandon Paul's Summer League Performance

As we all know, Brandon Paul went unselected in this year's NBA Draft and instead signed as a free agent with the Minnesota Timberwolves. Since signing with Minnesota he's joined the team's summer league roster to begin what will not be an easy road to an NBA roster spot.

I have no idea whether or not Brandon will catch on with Minnesota or any other NBA team, as it's hard to do so when you're not drafted. However, I can check in on his stats in three summer league games, and while he's playing well, I don't think he's playing well enough to get a spot with the T-Wolves at this point.

BP3 Talks About Signing With Minnesota 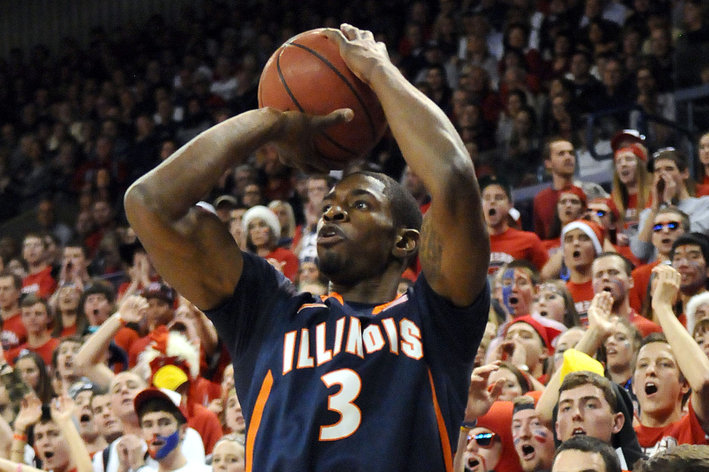 The biggest indicator of this is that, even on the summer league team, Brandon's only getting just over 11 minutes per game. The good news is that during Tuesday's game against the Miami Heat Brandon played 22 minutes, and played well in those 22 minutes.

He finished the game with 15 points, three steals, a block, a rebound and two turnovers.

In his first two games he played a total of 12 minutes and scored 11 points with an assist, a rebound and a block.

Of course, what you might not know is that Paul isn't the only Illini on Minnesota's summer league roster. Demetri McCamey is as well, and he's actually played pretty well. Demetri has only played in two games, but he logged 39 minutes in those games and scored 19 points while hitting five of his six three point attempts. He's also grabbed four rebounds, dished out four assists and has three steals. He also had five turnovers, including four in yesterday's game against Miami.

Still, even though McCamey has played well, I still think Brandon has a better shot of catching on somewhere at this point.

The question is will he?