Because one post on video games just isn't enough for a Thursday.

Share All sharing options for: Nate Scheelhaase Is Illinois Highest-Rated Player In NCAA 14

What? You thought our one post about Illinois and NCAA 14 this morning was enough video game talk around these parts for a June Thursday?

Well you were wrong. Idiot.

PlannedSickDays of BlackHeartGoldPants has been going through the individual rosters of teams in the game and he posted a photo of the top-rated players on the Illinois roster, and Nathan Scheelhaase checks in at the top with a rating of 89. 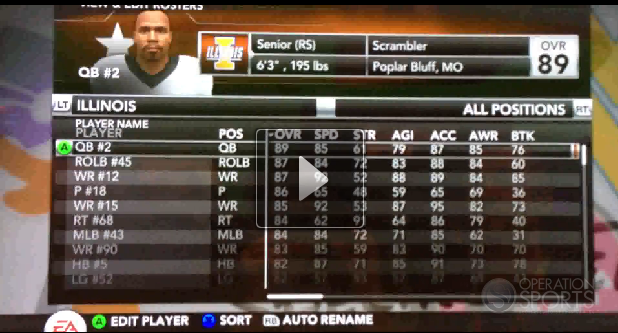 And to make it easier for everyone, here's a list of those players with their real names if they were their real names and EA Sports was basing the players off their real life counterparts which they MOST CERTAINLY ARE NOT WINK WINK SHH DON'T TELL ANYBODY.

So, in summation, the top ten players on the Illini according to EA Sports include our punter, a receiver that's no longer on the team, and somebody they just made up.