We Have A Winning Loyal-Tee Shirt Design

Hey, it's a slow news day

Share All sharing options for: We Have A Winning Loyal-Tee Shirt Design

After thousands of votes on four designs, the design for this season's "Loyal-Tee" football shirt has been chosen. It's the one in the photo above.

Here's the full release from the school on the shirt.

CHAMPAIGN, Ill. - Fighting Illini fans have chosen the new design of the 2013 Loyal-Tee shirt. The Football "Loyal-Tee" shirt features the winning fan-submitted slogan "There is an I in my Team" and is now available at both Gameday Spirit locations in Champaign and online.

The winning design, which is featured on the front of the shirt, was voted on by thousands of Illini fans out of four designs based on the winning fan-submitted slogan, "There Is An I In My Team." Jake Paskiewicz of Algonquin submitted the winning slogan, which was chosen from over 250 entries. The back of the shirt features the 2013 Illinois football schedule. The "Loyal-Tee" shirt will be worn by the Block I student section during the 2013 season.

Led by head coach Tim Beckman, the Fighting Illini have seven home games on 2013, starting with the season-opener at Memorial Stadium against Southern Illinois on Aug. 31. Illinois also will host a "Chicago Homecoming" game at historic Soldier Field in Chicago on Saturday, Sept. 14, against Washington. Season tickets start at just $99 and are on sale now at FightingIllini.com. Chicago Homecoming tickets can be purchased for as low as $30 here.

You can buy the shirts here. 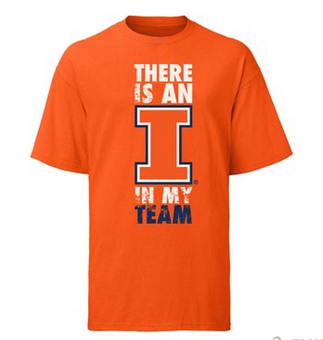 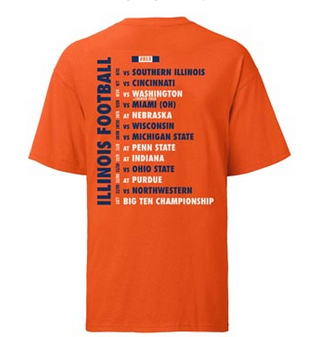